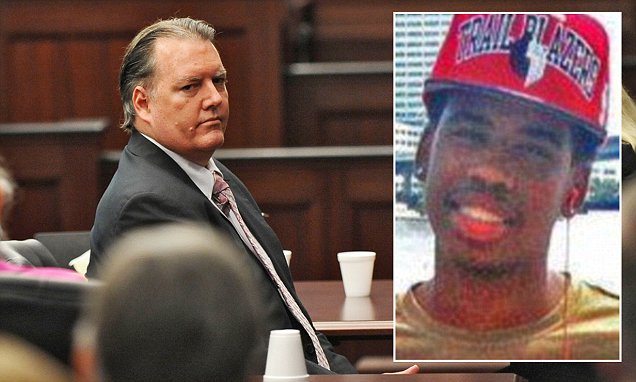 Dunn’s parents were in the courtroom for the verdict. Davis’ parents, Ron Davis and Lucia MacBath, both let out a quiet gasp upon hearing the jury forewoman’s words and then hung their heads and cried.

Dunn did not appear to have an immediate reaction, but later, he turned around and somberly shook his head toward his father.

Dunn, 47, was charged with murder after shooting into an SUV full of teenagers at a Jacksonville, Florida, gas station following a squabble over the music emanating from the teens’ vehicle.

Outside the courtroom, Davis’ mother expressed her gratitude for a verdict she said represented justice not only for her son but for “Trayvon and for all the nameless faces and children and people that will never have a voice.” She was referring to Trayvon Martin, an unarmed teenager killed earlier the same year by a neighborhood watch captain who was acquitted in the death.

“Words cannot express our joy but also our great sorrow because … we know that Jordan has received his justice,” she said. “We know that Jordan’s life and legacy will live on for others, but at the same time, we’re very saddened by the life that Michael Dunn will continue to live. We are saddened for his family, for his friends and the community that will continue to suffer by his actions.”

The victim’s father said the verdict made Jacksonville “a shining example that you could have a jury made of mostly white people, white men,” that delivers justice in a racially charged case.

“Hopefully,” Davis said, “this is a start where we don’t have to look at the makeup of a jury anymore.”

Prosecutor Angela Corey said Dunn faces a life term along with a minimum of 25 to life for using a firearm.

“It’s a vindication for justice,” she said of the verdict.

“We believe that we have to have as much justice as we can to assure that Michael Dunn will never ever walk out of a prison.”

Duval County Judge Russell Healey set a tentative sentencing hearing for October 17 but said he would wait until Tuesday to ensure the date worked for Dunn’s defense attorneys.

“This has been going on for two years, and everyone has acted graciously. I ask that you continue to do that,” Healey said before the verdict was read. “Remember, we must respect the verdict of the jury. They did not volunteer to do this.”

Dunn has said he shot at the vehicle because he thought Davis had a weapon and feared for his life, but the prosecution has alleged Dunn was the aggressor and pointed out he kept firing even after the teens fled.

Three of the 10 shots that Dunn fired struck Davis, one of them cutting through his liver, a lung and his aorta.

Investigators say Davis never had a weapon, nor was one found in the teens’ SUV or the surrounding area.

A jury found Dunn guilty of four charges in February, commanding at least 60 years in prison, but the jury was hung on the murder charge related to Davis’ November 2012 death.

Jurors began deliberating on the new charges just before 10 a.m. ET on Wednesday, after Healey dismissed two of the three alternates and provided instructions for the charges jurors were to consider.

The first charge to consider, Healey said, was first-degree murder, which would require that Dunn premeditated killing Davis.

If the jury didn’t feel the state proved first-degree murder, it was instructed to move on to second-degree, which would mean Dunn killed Davis via a criminal or depraved act.

The third charge was manslaughter, which would require a finding that Dunn unlawfully caused Davis’ death.

Killing Davis was lawful, Healey told the jury, if Dunn acted in the heat of passion or if he unintentionally caused Davis’ death. The jury could also find Dunn not guilty if he was in danger, acted in self-defense and exacted a justifiable use of force, the judge instructed.

Dunn was convicted in February on one count of shooting into a vehicle and three counts of attempted second-degree murder — one each for Davis’ friends, Leland Brunson, Tommie Stornes and Tevin Thompson, who were in the Dodge Durango with Davis that day.

The Satellite Beach, Florida, man hasn’t been sentenced on those charges, but prosecutor Eric Wolfson said at the time of the conviction that each attempted second-degree murder charge carries a minimum sentence of at least 20 years. There’s also a 15-year sentence possible on the conviction for shooting at the teenager’s vehicle, Wolfson said.