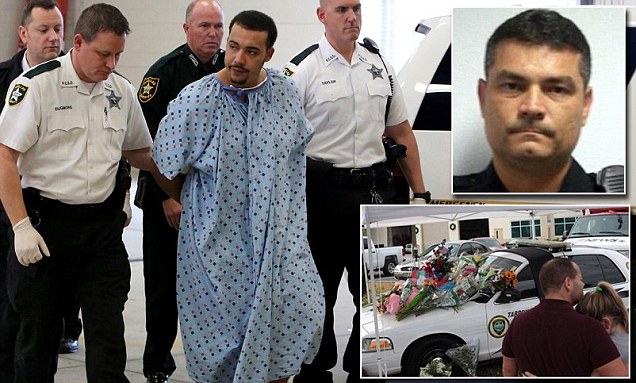 Officer Charles Kondek (left-bottom), 45, was gunned down early Sunday morning during a call for service in Tarpon Springs, Florida. Police say the suspect in the shooting is 23-year-old Marco Antonio Padilla Jr. (left-top), who was caught a mile from the crime scene after crashing the getaway vehicle into a pole. Officer Kondek, a father of five, had been a 17-year veteran of the Tarpon Springs PD. He moved to Florida from New York, where he served for five years at the NYPD. Mourners have been dropping flowers and cards outside the Tarpon Springs PD (right), outfitting a cruisers already decked with a large black band in Kondek’s honor.

via WTSP:
Pinellas County, Florida – The community of Tarpon Spring is mourning the loss of TSPD officer, 45-year-old Charles “Charlie K” Kondek who was shot and killed on Sunday morning.

According to investigators, Officer Kondek responded to a noise complaint at 199 Grand Boulevard at about 2:00 a.m. The suspect was banging on residential doors.

Jr., and a female companion arrived at the house and pulled into the driveway. The woman remained in the vehicle, while Parilla began knocking on multiple doors looking for someone who he said had “dimed him out” which is a violation of his probation.

Officer Kondek arrived on scene and exited his vehicle. Detectives say Parilla walked towards the officer and opened fire. Officer Kondek managed to return fire just before falling to the ground.

Parilla then ordered the woman out of the vehicle, took the wheel and as he fled the scene, ran over Officer Kondek. Detectives say that this occurred as another individual who lived at the Grand Boulevard address opened fire on Parilla, because he thought Parilla was looking for him. Parilla fled in the vehicle. Tarpon Springs Police engaged in a brief pursuit before Parilla crashed into a pole and then into a parked vehicle at Athens and Cross Street.

Following the crash Parilla exited the vehicle and fled on foot, and was apprehended shortly thereafter by a Tarpon Spring Police Officer.

Officer Kondek was transported to Florida Hospital North Pinellas where he later died from his injuries.

Parilla was interviewed at the Sheriff’s North District Station and was later transported to the Pinellas County Jail without further incident. He admitted to the crime and was arrested for first degree murder.

“With grieving hearts, the Tarpon Springs Police Department is saddened to announce the loss of Officer Charles Kondek.”

Charles “Charlie K” Kondek served the city of Tarpon Springs as a sworn law enforcement officer for 17 years, many of which were on the midnight shift. Originally from New York, he had previously served for over 5 years as a NYPD officer before moving to Florida.