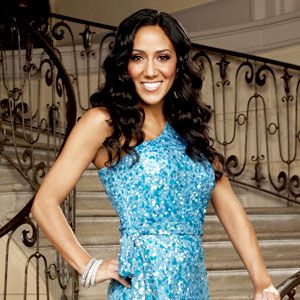 It was the showdown that surprisingly didn’t result in a table flip. Teresa Guidice and her sister-in-law/nemesis, Melissa Gorga, finally decided to sit down together and air out their issues on Sunday’s “Real Housewives of New Jersey.”

And it was there that the big offense was revealed: Teresa acted like a meanie when Melissa (gasp!) used the same photographer for Antonia’s Christmas card photos that Teresa onces used for Gia! If anything merits a table flip, that surely does.

Instead, the two hug it out. Cut to Melissa’s confessional where she obviously says there’s a little voice inside her that says not to trust Teresa. It’s those same confessionals that Melissa admits have given her a different perspective on Teresa’s side of the story.

“There’s definitely times where I hear her point,” Melissa told Show Tracker. “But it’s been frustrating for me because I’ve been asking her for years and years and years to fix it, to work it out with me. All of a sudden, within the last year, she was doing all the right things and saying the right things. But better now than never, I guess. I’ve been trying to get her to act this way for years. I guess I was confused: ‘Why now?’ But whatever. We’re family. I’m always willing to forgive.”

How noble. Melissa, by the way, was in Los Angeles late last week to oversee the initial stages of her new champagne Magnifico Germanotta (a.k.a. MG, for Melissa Gorga) — because that hasn’t been done before. She insists, though, that the idea came long before she joined the show and long before liquor became the product of choice for “Housewives” to launch.

So where does Melissa’s relationship with Teresa stand today?

“Right now, she’s my sister-in-law,” Melissa said. “We have kids the same age — we try, we try to work it out. And we try to be together for the family. It’s not like we’re best friends, but we’re family. I want my husband to have a relationship with his family. I’m kind of put between a brother and a sister. As the show goes on, you’re going to see that I’m stuck in the middle of this. I really have nothing to do with the reason the two of them have issues.”

Exclusive Video: Get Your First Taste of VH1’s Famous Food