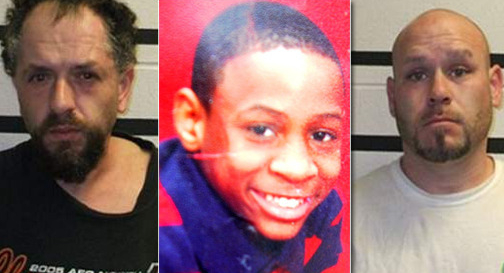 via Political Blindspot:
Early Sunday morning, December 1st, 16-year-old Dione Payne was beaten, raped and murdered by Michael A. Geldrich, 36, and Michael J. Watson, 39. Both are currently being held in the Warren County Jail. So far, rape charges have been ignored, and the police have shrugged off hate crime charges in spite of the fact that both attackers are white, and Payne was African American.The severity of their attacks on the youth make it clear that this was not simply a crime to steal drugs, but instead that there was a key element of hate involved. Still, Franklin Police Chief Russ Whitman, who said there is “no evidence” that there was a racial motive to the rape and murder of this 16-year-old African American. Citizens of Franklin, Ohio have weighed in on our article reporting these attacks, and said that this institutionalized racism does not surprise them in the least.

Instead of highlighting this injustice, some local media reports have instead chosen to fixate on a checkered history of the juvenile: possessing narcotics, and even allegations that he had fired gun shots in the past. They talked about morbid comments made on his Facebook account before the day he was raped and beaten to death. They even called the 16-year-old out for getting arrested for littering. What they did not do was explain why the police have ruled out a racial motive to the attack, and why the Warren County Prosecutor has neither pursued hate crime charges, nor even charged the attackers with rape.

What can you do? Well for starters, contact the Warren County Prosecutor, who is now handling the case. Demand that all crimes committed against 16 year old Dione Payne be presented to the grand jury on Michael A. Geldrich and Michael J. Watson- for the hate crime of rape, robbery and murder! The prosecutor can be contacted at the number and email below:

Prominent Doctor’s Adopted Son, 17, Stabs Sister To Death With A Kitchen Knife In Their Home