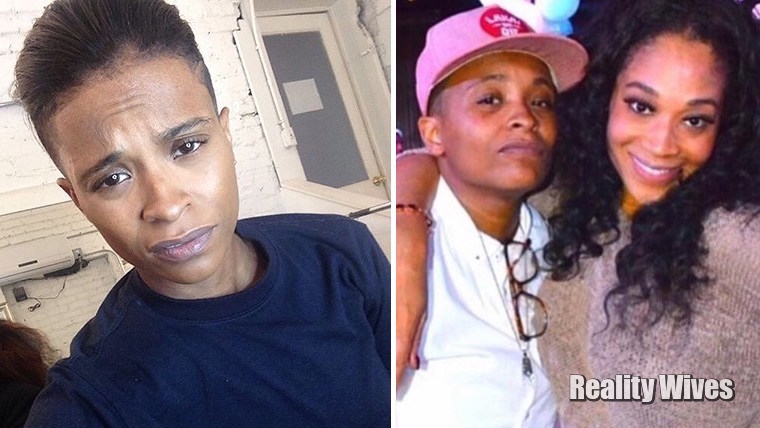 Since Mimi had always identified as straight was there any part of you that was tentative to get involved with her?
Chris: When it comes to women, no woman is straight. [Laughs] I’m joking. She came on to me so I wasn’t the one pursuing the situation. Somebody came on to me, I found them attractive. Yeah, you worry like if she sees a dude, like is she going to go back to what’s naturally there for her but at the same time you have to be confident with what you’re offering. I know when we first started she was all about me. She didn’t even give me room to have those kinds of concerns.

Are you worried about how the public will respond to your relationship or how you personally identify?
No, I deal with people’s opinion of me every day when I walk out the door. If anything it opens up conversation and it opens up conversation in a community that’s already kinda got a limited perspective on things. A beautiful thing is the white community understands [but] the black community doesn’t. It’s like you’re giving them an opportunity to see different levels of people and kind of open up their minds to stuff. I’m not concerned at all. I have thick skin.

Mimi seems to refer to you as her girlfriend or she’ll say “she.” Do you think she understands your gender identity?
She doesn’t get it but she’s straight. I mean you’d have to be an extremely sensitive, well-rounded straight person to go out of your way to try to understand something like gender identity because that’s somethings that’s personal. I tried my best to explain it to her but she lays everyday with me, she knows what I look like biologically so in her defense could you really blame her for calling me her girlfriend? You know what I mean? She tried her best to wrap her head around around it. At some point, she’ll just say “Chris, Chris, Chris” [instead of using pronouns] but if she’s talking to her homegirls and her homeboys she can’t say that’s my boyfriend. They’ll look at her crazy.

But if she’s your partner and loves you, shouldn’t she want to go out of her way to call you a man or her boyfriend because that’s what you prefer?
Part of me would like that but it’s like, you gotta pick and choose our battles. You can tell the whole world. You can scream it to the mountain top that your not comfortable with something but will somebody do it anyway is the real question. My thing is, if I continue to hold power in how people label me, then I give them the power. It took me 33 years to figure out what I figured out so it’s probably going to take somebody else even longer.

You say you and Mimi aren’t in a lesbian relationship but do you feel apart of the LGBT community?
Right, and that’s the beautiful thing about the gay community. It’s like they will build a tent to put you into it. I would call myself genderqueer. The reason why I wanted to label the heterosexual-ness of our relationship is because people tend to confuse gender-identity with sexuality and I wanted to make it clear that I identify as masculine and I’m only attracted to feminine women. I like to, as closely as possible engage in heterosexual activities, if you get my drift. In that respect it’s kinda like you’re trying to make somebody understand something and put it in a box so they can go, “Oh, okay, that makes sense. I get it.”

Prior to filming the scene with Ariane where you explain your gender identity, was she already aware you didn’t identify as a woman? She kept calling you “Christina.”
Ariane knew of my gender identity prior so I think the bulk of that was disrespect. In Ariane’s eyes I’m too feminine to be anything else. She thinks I might look too pretty or that I might be to sensitive or I might not sound [like a man,] or I might not look [enough like a man,] so although she is a part of the gay community she’s kind of victim to heterosexual standards.

If you look at Ariane’s personality, she’s an aggressive. So counter-actively, I could be disrespectful and refer to her as “Aaron” from now on because she has masculine traits. I’m not here for that but I do think that the root of it is disrespect and it’s a person’s perception of you.

Can you explain the word “touch-me-not”? I feel like that’s going to raise some questions with viewers.
I actually am going to hate that word. Again, it’s like trying to make somebody who’s never seen the moon, see what the moon is. I want you to understand I’m not somebody who wants, [and] this is specific to me, be touched in areas that will remind me mentally that I am biologically female because for me, one of the few moments, I’m able to kinda of exhibit my masculinity is sexually. I wish I would have chosen a better term.

Does being a “touch-me-not” allow for a fulfilling sex life for you?
I will agree if anybody else is like me they’re probably just as sexually frustrated as I am. I can tell you that there is a level of mental satisfaction to it. It’s a mental thing. Physically, I don’t know. Being in a place for so long, I don’t know another way.

Are you concerned now that you’re on Love & Hip Hop, people are going to continue to ask about your sex life and how you have sex?
No, that doesn’t bother me. I think the problem in America is we don’t talk about sex. If it’s a disrespectful question like, “You’re not a man but tell me how you have sex with her. You think you’re a man?” In that regard, yes, I might become uncomfortable but if it’s somebody who genuinely wants to learn something new? Sex is fun! That’s why we’re all doing it.

You mentioned that you’re not interested in hormone therapy. Can you explain why?
I’m going to say that I’m wavering on it but my main issue with it is that it can create physical issues because it’s an obvious biological change. Two, I’m extremely vain so the idea of losing the hair on my head is a scary idea. And three, you know I have a mother who accepts me for who I am but I’ve also got these doctrines that are like embedded in me that part of me doesn’t want to become to unrecognizable for God when it’s all said and done.

What does your family think of your gender identity
I have to admit after dating Mimi it made me dig down and have a conversation with my mom and, you know, with the death of my father. Prior it was an elephant in the room. I’m 32 years old walking in with a mind of I know you know, we just never said anything about it. But because I’m very serious about getting top surgery and because I’ve wanted to be more transparent with her and have a closer relationship, I called her and I said, [My gender identity] had nothing to do with you I’ve just always felt this way and this is who I am. And she actually gave me a really good response. She was like, and I want to thank Ellen [Degeneres,] because I think Ellen has softened her heart to gay people. She was like, I know some gay people, trans people, bisexual people with bigger hearts than anybody else so whatever you do I love you, regardless.

Are you worried about her seeing you on reality TV now?
I think I handled myself in a pretty good manor so I think my mom will think, Okay, I have a well-raised child. My family doesn’t know the depth of my personal life. Like when you go out to family dinners you’re still that “insert government name.” You know what I mean? So I’m actually excited. It’s like I get to tell them everything without having to tell each person one by one.