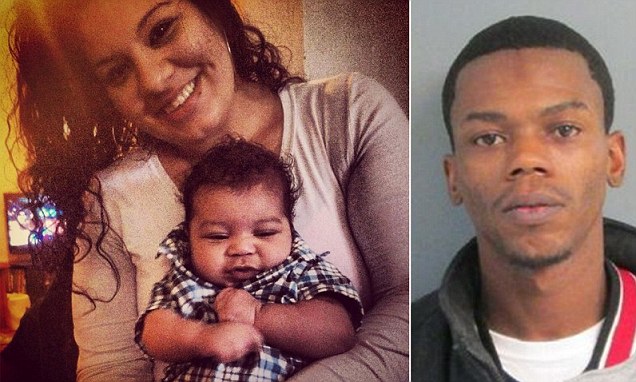 via MLive:
Unable to pay traffic fines and wanted on two misdemeanor charges, Monica Perusse was serving a 30-day sentence jail when she learned her 4-month-old son had died.

She hadn’t held her son for two weeks. She wasn’t there for him, she said. “My heart is shattered and broken. It is like a piece of me is gone.”

Michael Young Jr., born Sept. 17, died early Monday. His father, Michael Young Sr., 30, is accused of causing his death. Jackson police believe he placed the child in too-hot bathwater Jan. 15 or 16 and the water burned the child, Deputy Chief John Holda said. A medical examiner concluded the boy died of complications stemming from the burns, for which Michael Young Sr. did not immediately seek treatment, Holda said. He is charged with felony murder and first-degree child abuse. If convicted of the murder offense, he will serve a mandatory life sentence.

Perusse did not want to talk about the case. “I don’t even know the full details. … I was not there,” she said.

She was arrested and jailed Jan. 4 for contempt of court. She had not appeared as ordered and was wanted on warrants for misdemeanor charges of retail fraud and driving on a suspended license, said Rick Bradley, Jackson County District Court chief enforcement officer and traffic manager. She also had unpaid traffic fines and had not complied with a payment plan, court officials said. Perusse said she owed $628 she could not pay. She has seven open traffic cases in district court for offenses such as speeding, not having proof of insurance and “defective equipment,” records show.

She said she told the judge she was caring for an infant and was to soon begin a job at Taco Bell, but Jackson County District Judge Joseph Filip, who declined comment, gave her the jail time. He allowed her early release several hours after her son’s death. She left the jail about 12:30 p.m. Monday.

About nine hours earlier, at 3:30 a.m., a Jackson police officer had informed her Michael Young Jr. was dead.

Before her incarceration, Perusse was living with Michael Young Sr. on Shahan Drive north of Monroe Street. She had worked at an assisted living facility, but left the job and did not work last year. She was pregnant and sick and could not find employment, she said. Michael Young Sr. was working third shift for a manufacturer in Concord. He was laid off in October, she said.

When the baby was born, they had nothing. “My traffic fines were the last thing on my mind.”

She is bothered by critics and hurtful comments people are sending her on Facebook and she wants people to leave her “and mine” alone. “I heard the worst possible news a parent could ever hear, and I just want people to consider that,” she said.

She is overwhelmed and cannot deal with it, she said. “I feel like God has put way too much on me right now.”

Let her mourn for her child, she urged others.

Perusse and her son had a special bond, she said. “He was too grown for his age. He was a lover.”

A healthy boy, he wanted only to eat and smile and “be loved on,” she said, and he adored his mother and father. She said she did not have any previous issues with Michael Young Sr., who has three other children living in Tennessee with their mother. He does not have any felony convictions in Jackson County. In 2007, he pleaded guilty to a misdemeanor assault offense. Perusse met Michael Young Sr. about two years ago when he cut her older son’s hair. She has two children, ages 5 and 7, with another man and shares custody, according to court records.

She and Young agreed to get married on New Year’s Eve, she said. “We were going to make our family right in God’s eyes.”

They had so many plans, she said.

“And the most horrible thing ever just turned everything upside down.”