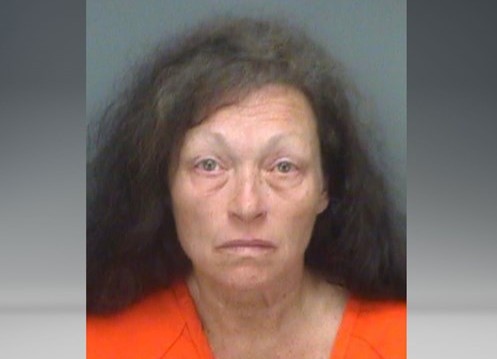 62-year-old Florida mother Kathleen Marie Steele, who once starred in a 2009 episode of the Discovery Health, “I’m Pregnant 55 years old”, with her husband had their first son together. returned to the car and was told by her eldest son that the baby was in “serious” condition.

Her husband died of cancer in 2011 at age 66. The two youngest children were born through artificial insemination, using the dead husband’s frozen sperm. Kathleen had been raising the children alone.

A third child, Kathleen’s 3-year-old son, Phillip, was also in the car at the time.

Kathleen who was artificially inseminated and gave birth to a baby girl 13 days ago, is now charged with her daughter’s death. Detectives say she left her 6-year-old son alone with the baby, and he beat her to death.

Kathleen Marie Steele, 62, was charged with aggravated manslaughter in connection with the death of her infant daughter, Kathleen Steele.

Sheriff Gualtieri said that Kathleen who once appeared on the show “I’m Pregnant and 55 Years Old,” had left the baby alone in a van with her six and three year-old sons while she went into a cell phone store to have her cell phone repaired.

“Frankie and Phillip, at 6 and 3, were running amok, unsupervised, and what others saw was consistent with what happened on Monday, and that she didn’t care for the kids and was negligent and neglectful and abused them by leaving these kids in the car,” the sheriff said.

While the boys were alone with their little sister in the van, the baby started crying. Gualtieri said the 6-year-old boy took the baby from her car seat, shook her and slammed her head against the ceiling.

“The best way I can describe it to you is he pummeled her. He was tossing that baby around like a rag doll. One of the worst things I’ve ever seen, with especially a 13-day-old, and her appearance was just one of that had been pummeled. The baby was simply beaten, traumatized, gross swelling about her face. The skull was cracked in numerous places,” said the sheriff.

He said the 6-year-old is also a victim. The little boy had behavior issues, the sheriff said.

When Kathleen returned to the van, her 6-year-old son told her that the baby was in distress. However, she drove to a car rental business where Sheriff Gualtieri said she went inside for 30 minutes to renew the contract for the van she was renting.

Later, the son said again the baby was in distress. Sheriff Gualtieri said Kathleen called a neighbor, who is a nurse. The nurse went to the motel and checked the baby, who appeared to be dead. The nurse then called 911.

Paramedics responded and tried to revive the baby. The sheriff said Kathleen did not appear to be concerned about her daughter’s condition. While rescue crews were trying to revive her infant daughter, Kathleen was putting groceries away in the kitchen.

“She was very aloof about it,” said Sheriff Gualtieri.

The sheriff said that an autopsy showed the baby girl suffered severe head trauma and had multiple skull fractures.

Steele became pregnant with the 6-year-old when she was 55. That’s when she appeared on the reality TV show.

She had had a devoted husband, sailboat and beach house, everything except the children she apparently wanted. Before Steele’s husband died of cancer, the couple had his sperm frozen.

A doctor in New York allegedly performed the artificial insemination.

The suspect was “ill-equipped to have a baby,” the sheriff said. The kids were left unsupervised, he added.

The sheriff said the 6-year-old boy admitted to injuring his sister and described what happened to detectives. “We had him show us with a doll, and it was very violent. He was slamming that doll, and it’s terrible,” the sheriff said.

Sheriff Gualtieri said that detectives found the baby’s blood on the ceiling of the van.

The 6-year-old boy will not be criminally charged. He and his younger brother are in DCF custody. “It’s a very sad case to say the least,” said Gualtieri.

Man, Girlfriend Attack Grandmother Who Wouldn’t Drive Them To House To Have Sex