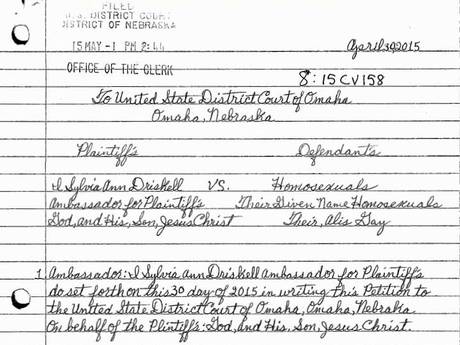 via NBC News:
A Nebraska woman identifying herself as the “ambassador” for plaintiffs “God and His Son, Jesus Christ,” is suing all homosexuals on Earth for breaking “religious and moral laws,” according to court records filed Tuesday.

In the suit, entered into the docket as Driskell v. Homosexuals, Sylvia Ann Driskell, 66, of Auburn, Nebraska, asks in a seven-page, neatly handwritten petition (PDF) that U.S. District Judge John M. Gerrard decide once and for all whether homosexuality is or isn’t a sin.

The suit doesn’t cite any case law under which a judge could make such a determination. In fact, it cites no court cases at all, quoting Webster’s Dictionary and numerous Bible verses, instead, to bolster Driskell’s central contention, which is:

“That homosexuality is a sin and that they the homosexuals know it is a sin to live a life of homosexuality. Why else would they have been hiding in the closet.”

Driskell writes, “I’m sixty six years old, an [sic] I never thought that I would see the day in which our Great Nation or Our Great State of Nebraska would become so compliant to the complicity of some peoples [sic] lewd behavior.”

Driskell, who’s representing herself, didn’t answer a call for comment. The court noted dryly that, regarding to the defendants, “No summons [was] issued.”

Ok to play devils advocate here – Ms Driskell what about fornicators, people who marry multiple times, adulterers, thieves, murderers, those who break the dietary laws (eating unclean foods such as pig, oysters, losters etc), those who break the seventh-day Sabbath, liars etc? I would like to see that lawsuit. What are your thoughts? Post your comment below.

Woman, 22, Who Tweeted “2 Drunk To Care” Before Killing Two Best Friends In Car Crash Sentenced To 24 years In Prison

Woman, 22, Who Tweeted “2 Drunk To Care” Before Killing Two Best Friends In Car Crash Sentenced To 24 years In Prison