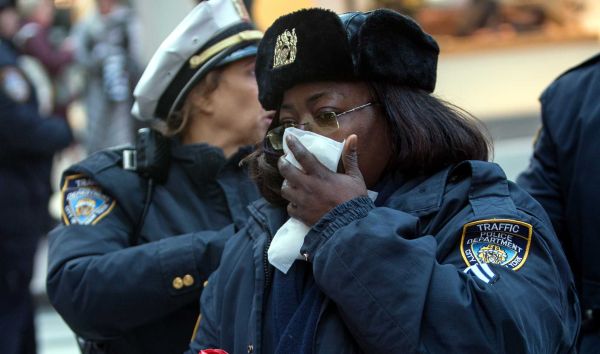 via Newsday:
A uniformed NYPD traffic enforcement agent was struck and killed by a large truck on a bustling Manhattan street Saturday afternoon, police said. Kalyanarat Ranasinghe, 71, was pinned beneath the Freightliner industrial vacuum truck at about 2:30 p.m. on East 44th Street between Fifth and Madison avenues, witnesses and colleagues said. The Queens resident was pronounced dead at the scene.

The midtown accident brought traffic to a halt in the busy retail district on one of the busiest shopping days of the year. Fellow traffic agents cried and consoled one another, mourning their fallen colleague.

“The officer was on the roadway doing his job,” said NYPD Commissioner Ray Kelly. “This underscores how dangerous the job can be.

“These officers don’t make a lot of money, are out there in heavy traffic, in the worst possible weather day and night,” he added. “Unfortunately, things like this happen.”

Anthony Trinidad, a doorman at a building on East 44th Street, said he saw the enforcement agent talking on his cellphone in front of the parked truck when the driver suddenly pulled out and ran over him.

“It was a freak accident,” Trinidad said. “The driver was pulling out and didn’t see him. People were yelling for him to stop.”

NYPD Deputy Chief Kim Royster said Ranasinghe was struck by the right side of the truck, which is used to pump out water or debris. Minutes after the accident, a coach bus collided with the truck, police said. No other injuries were reported. Ranasinghe “was on duty, but it is undetermined what he was doing” at the time of the accident, Royster said.

Police did not release other details of the accident. The drivers of both vehicles remained at the scene afterward, and neither had been charged as of late Saturday. The collision remains under investigation.

“Our thoughts and prayers are with the Ranasinghe family,” he said.

Ranasinghe, who had seven years on the job, was a native of Sri Lanka and lived with his wife and daughter, said Rahim Syed, vice president of the union that represents NYPD traffic enforcement agents.

“He worked six to seven days a week,” Syed said, noting that the accident occurred at Ranasinghe’s usual post. “He was a very hardworking man.”

“He was a very nice man,” union president Robert Cassar said. “It’s a big deal that we lost him. All the agents are stunned. This doesn’t happen very often.”

Syed said Ranasinghe recently told him that he wasn’t comfortable directing traffic in the cold weather at his age, and preferred parking enforcement duties instead.

Family Comes Home To Find Stranger Has Moved Into Their House, Changed The Locks

Family Comes Home To Find Stranger Has Moved Into Their House, Changed The Locks