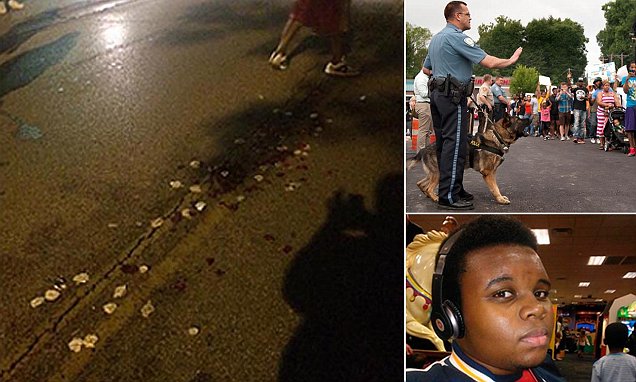 via MOTHER JONES:
As darkness fell on Canfield Drive on August 9, a makeshift memorial sprang up in the middle of the street where Michael Brown’s body had been sprawled in plain view for more than four hours. Flowers and candles were scattered over the bloodstains on the pavement. Someone had affixed a stuffed animal to a streetlight pole a few yards away. Neighborhood residents and others were gathering, many of them upset and angry.

Soon, police vehicles reappeared, including from the St. Louis County Police Department, which had taken control of the investigation. Several officers emerged with dogs. What happened next, according to several sources, was emblematic of what has inflamed the city of Ferguson, Missouri, ever since the unarmed 18-year-old was gunned down: An officer on the street let the dog he was controlling urinate on the memorial site.

The incident was related to me separately by three state and local officials who worked with the community in the immediate aftermath of the shooting. One confirmed that he interviewed an eyewitness, a young woman, and pressed her on what exactly she saw. “She said that the officer just let the dog pee on it,” that official told me. “She was very distraught about it.” The identity of the officer who handled the dog and the agency he was with remain unclear.
Candles and flowers marking the spot where Brown died were soon run over by police vehicles.

The day brought other indignities for Brown’s family, and the community. Missouri state Rep. Sharon Pace, whose district includes the neighborhood where the shooting occurred, told me she went to the scene that afternoon to comfort the parents, who were blocked by police from approaching their son’s body. Pace purchased some tea lights for the family, and around 7 p.m. she joined Brown’s mother, Lesley McSpadden, and others as they placed the candles and sprinkled flowers on the ground where Brown had died. “They spelled out his initials with rose petals over the bloodstains,” Pace recalled.

By then, police had prohibited all vehicles from entering Canfield Drive except for their own. Soon the candles and flowers had been smashed, after police drove over them.

“That made people in the crowd mad,” Pace said, “and it made me mad.” Some residents began walking in front of police vehicles at the end of the block to prevent them from driving in.

A spokesperson for the St. Louis County Police told me that the department was unaware of these incidents; he added that complaints should be submitted to the department’s Bureau of Professional Standards.