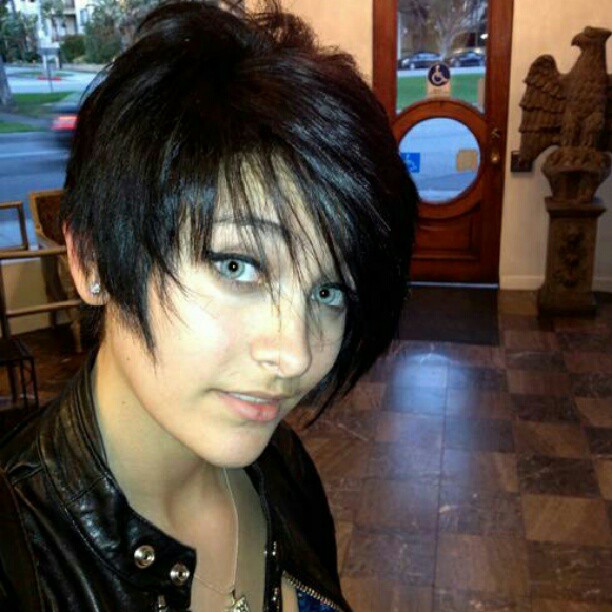 via TMZ:
9:51AM PST: A source closely connected to Paris tells TMZ … she has “tried this [a possible suicide attempt] in the past” but “this was far more serious. It was not a cry for help.”

10:14 AM PST: A source connected to the family tells TMZ … Paris “threw a fit” last night after she was told she couldn’t go to a Marilyn Manson concert. We’re told she ran into her room screaming and slammed the door.

10:14 AM PST: Debbie Rowe’s lawyer, Eric George, tells TMZ: “We appreciate everyone’s thoughts for Paris at this time and their respect for the family’s privacy.”

Paris Jackson was rushed to the hospital early Wednesday morning, and sources tell us it was a suicide attempt.

Paris was taken out of her Calabasas family house on a stretcher at around 2 AM and taken by ambulance to a nearby hospital.

The 911 call came in at 1:27 AM. We’re told the caller reported a possible overdose, although a source connected to the emergency response said there were multiple cuts on one of her wrists.

On Tuesday night … Paris posted some cryptic tweets, including, “I wonder why tears are salty?” … and “yesterday, all my troubles seemed so far away now it looks as though they’re here to stay.”

On May 19, Paris said, “Kurt Cobain is Jesus” during a video chat with someone … and she posted the whole exchange on Vine.

Get well soon Paris x
Update: Paris Jackson left a suicide note and then cut her arm with a meat cleaver. What?! Sources with an intimate knowledge of the situation tell TMZ Michael Jackson’s daughter called a suicide hotline and the person on the other end was alarmed enough to call 911. Our sources say in addition to cutting her right forearm, Paris had taken a large number of Motrin pills. We’re told once Paris was taken by stretcher to an ambulance and then transported to a nearby hospital, she was placed under a 5150 psychiatric hold for 72 hours. She received numerous stitches for the cut. This is alarming to say the least.

via CBS: Paris Jackson is “physically fine” after being taken to a hospital early Wednesday, an attorney for her grandmother Katherine Jackson said.

Perry Sanders Jr. wrote in a statement to The Associated Press that the 15-year-old daughter of Michael Jackson is getting appropriate medical attention and the family is seeking privacy.

“Being a sensitive 15 year old is difficult no matter who you are. It is especially difficult when you lose the person closest to you. Paris is physically fine and is getting appropriate medical attention. Please respect her privacy and the family’s privacy.”

Sanders declined further comment on Paris’ condition or the circumstances that led to her hospitalization. Her biological mother, Debbie Rowe, told “Entertainment Tonight” that Paris was hospitalized after a suicide attempt. People magazine reports that the teen cut her wrists with a kitchen knife and took as many as 20 ibuprofen pills.