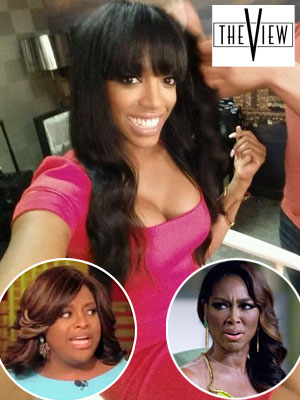 On Tuesday, April 29th, Porsha Williams appeared on The View where she was interviewed about her Real Housewives of Atlanta reunion brawl with Kenya Moore. Porsha said that tension between she and Kenya was strong and that Kenya brought the props, which Porsha calls “weapons” to antagonize her. Porsha said:

“Last season, I went to the reunion and at that time I was going through a divorce,” Williams said. “And um, well it was right before … she was accusing me of cheating.”

When Porsha was asked about the assault charges she faces after Kenya pressed charges, Porsha said:

“Just like everybody else who gets [charged with] something like that, I have to go to court. I am considering pressing charges too because the scepter she had was super heavy.”

However, comedian and co-host Sherri Shepherd was not buying Porsha’s story saying:

To which Porsha responded:

“They do, but I didn’t know I was signing up on a show to end up with a  mug shot— or to be bullied to that level! This woman has been bullied me and [showed] hatred toward me from day one and now she has weapons in her hand!”

Porsha also said that she suffered from bullying in elementary and middle school and that she immediately felt bad after pulling Kenya’s hair and ripping her to the floor. What are your thoughts? Post your comments below.