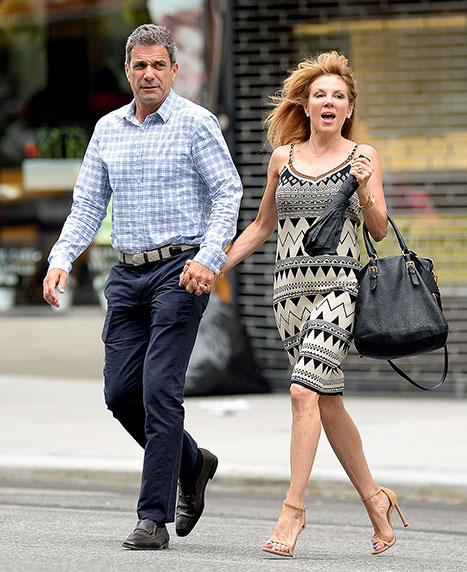 It appears that Real Housewives Of New York stars, Ramona and Mario Singer are serious about trying to work things out. We reported that Ramona and Mario had some serious drama just before the premiere of the current season. Ramona threw a fit when Mario brought his mistress, Kasey Dexter, to their Hamptons home. She also called the police on him. She then later filed for divorce just four months ago on the 19th January.

The above picture was taken yesterday Wednesday 4th, June in Manhattan as they appeared to be happy no word yet whether Ramona will continue with divorce preceedings to end their 27-year relationship and 20 year marriage.

The couple who have a daughter Avery, 19, first separated in January 201, Ramona had filed for divorce on. Prior to their split, reports alleged that Mario had an affair and impregnated a young woman; Ramona denied the claims.)

More recently, the two were said to be working on their marriage. Ramona told former Real Housewives of New York City cast member Bethenny Frankel in March on her now cancelled talk show, that she wasn’t sure whether it was really over.

“Right now I don’t know where anything is going. I have my myself, I have my friends. I know my husband loves me, he knows that I love him, and we will see what happens. Nothing is written in stone. Life is an evolution.”

The fight, split, divorce, and reconciliation reportedly will not be aired on the current sixth season of RHONY, which means no one can ask her any questions about her marriage and the affair.