The ladies journey to Las Vegas by bus. Nene flew there first class of course as she had to stay behind in L.A. to film a scene for The New Normal.

When everyone has arrived, they all decide to go to a strip club. Porsha doesn’t want to go as her husband 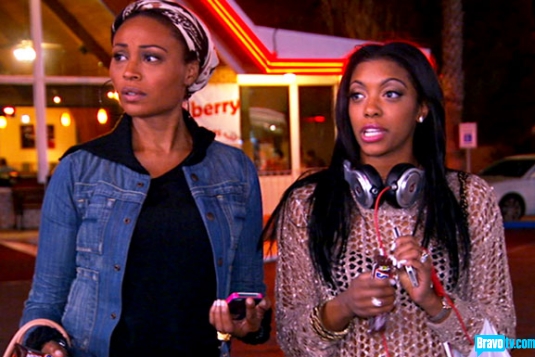 wouldn’t be pleased. The ladies all take offense to that and drop Porsha off, while they go and enjoy the coochie show. Now if going to strip clubs is your thing, more power to you. But why must a woman be berated because she chooses not to frequent strip clubs?

I’m surprised that the girls trip this year was to Las Vegas and not the Congo, as Bravo never wants to blur the color lines too much – Black girls trips go to ‘Black’ places like Africa and every other housewives show goes to the whitest places on earth, like Paris.

Nene and the other ladies want to school Porsha on her marriage. Now don’t get me wrong, I think all the ladies are fab, some in their very own special way. But speaking on anybody’s marriage even if they ask for advice is stepping on some very shaky ground. If Kordell is buying Porsha everything she wants, she gets to spend all the money and she is a kept woman, with him allowing her or not to attend questionable not lifesaving events, and SHE is happy with that, who am I to butt my big nose in? Most of these women don’t think there is a problem with their marriage until a ‘friend’ gives them advice. Porsha’s getting divorced soon. When people who are NOT your friend give you marital advice, it only ends badly.

Nene is divorced and currently ‘dating’ her ex-husband, Gregg, who is now her fiance, who famously bashed her while married on the radio.
Kandi is engaged again and living with her fiance. She is also no expert on marriage.
Phaedra is the husband in her marriage, her wife Apollo is an illiterate who is easy on the eyes. She also was his lawyer as he spent a few years in prison.
Kenya bought a man on RHOA, Walter, just to pretend to be her boyfriend.
Cynthia is married to Peter; who her sister and mother didn’t like and they meddled in their relationship. He also has money issues, but he runs that relationship.

Now I would believe Nene had the best of intentions especially if she pulled her aside and spoke to her alone; But what woman is going to say in front of a bunch of strangers, yes my husband is mentally abusive – Help me! Now I mentioned everybody’s 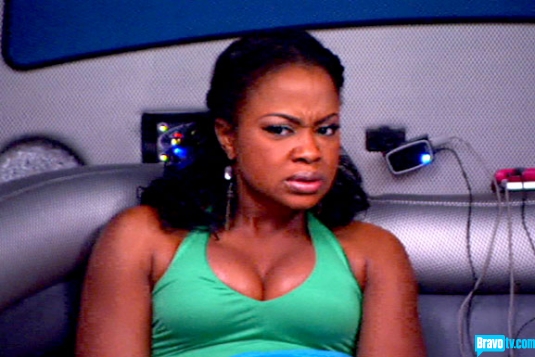 relationship above to point out that everybody has marriages and relationships that have issues and are not perfect. Not one of the ladies should be forcing their opinions on Porsha, even if she asks for it. I may not agree with Porsha or any of the women’s choices above, but that is their right as an individual to live as they please. There are some marriages which are a mess, some are traditional and some are very lopsided. I was actually annoyed that most of the ladies jumped on Porsha’s case about her preference of not going to the strip joint. Phaedra is not a rational voice for Christianity. Nene also voiced her opinion that she was concerned that Porsha never came to the strip club. Concerned. If some of these women weren’t so loosey goosey, they wouldn’t have so many issues in their relationships and I am not saying that Porsha should just lay there and take any abuse, but that is her marriage, no one else’s! I have a lot more to say on that, but I won’t.

Now onto the strip joint, Nene noticed how excited Phaedra got when the wonderfully limber stripper was baring her uterus for all to see.

Nene: “Phaedra was like, ooo you so pretty, your body is so great. I thought she was going to take a bite out of hello kitty” #RHOA

Phaedra then points out that Jesus hung out with prostitutes. Oh where do I begin. First of all since you brought the Son of G-d into 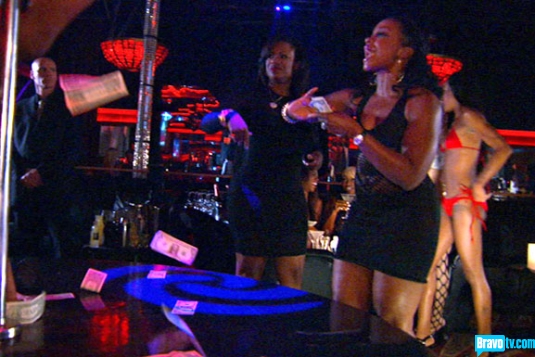 this let me school you. Jesus didn’t ‘hang’ out with prostitutes, He actually hung out with tax collectors and sinners to be exact. Tradition identifies Mary as a reformed prostitute, not the Bible. Jesus was a friend to ALL sinners. Sinners followed Him, not the other way around. Sinners came to Him to learn not to show him their tricks. If you are going to refute this, please post your Bible verses down below. Phaedra knows she cannot honestly say going to the strip club is a good thing or that she is trying to find lost souls, when she herself is lost. She is just there for a good time. Nothing wrong with that, just own it hon. Next!

Later backstage with the dancers at the Jubilee Theater, they all tried on costumed hats and did the can-can. Kenya’s top fell to expose her breasts. Did she not feel that? Normally when you have had a boob job, you lose sensation in the nipples, so you cannot feel when material brushes against the breasts, hmmm.

They later window shop at Vicci Fine Jewelry, Kandi looks at a diamond ring, as Todd has been asking her what type of rings she like. She picks up a ring, took a picture and sent it to Todd, which amazingly, eventually becomes her engagement ring in December 2012.

Kandi prepares a Bedroom Kandi party for the ladies in her hotel room and hands out some kegel balls. Because we know some of these ladies need to tighten up down there. Then they all try to eat chocolate strawberries sexily, why? I will never know, that was not cute. Phaedra and Cynthia tried their hand at showing the ladies how to eat a strawberry, then it was Kenya’s turn. She did her best and Phaedra responded, “Somebody might light it, but it don’t look like Walter do”. Kenya was not amused, I noticed a lot of chopping of splicing of these hatchet scenes on the episode. So we don’t know what was said before or after by either Kenya or Phaedra. So at this point, it looks like Phaedra was just being a b*tch. I had to take Kenya’s side on this one, she was well behaved in comparison to previous episodes and didn’t say any scathing comments to the ladies, it was Phaedra who wanted to stir up some trouble and surprisingly Kenya didn’t say a word to them. Then Phaedra had the nerve to say in her confessional, “That every event that Kenya comes to, there has to be some level of drama and she has to be getting some level of attention”. Really? As far as I could see, Kenya was behaving herself, Phaedra was trying to be the joker and cause contention at the party and trying to start the drama. Next Kandi asks them to write down a sex or relationship question and place the question in a bowl to be answered by a random person.

Porsha picks
Q: Best ways to win a fight? No one answered it.
Nene picks
Q: What do you do when someone who you thought was your friend initially hurts and then pretends that it never happens.

Obviously this was Kenya question, but why would she pick that question? These questions sucked! Kenya asks Phaedra to answer it as that is her question. Kenya claims that Phaedra hurt her and cut her. Phaedra responds that Kenya intentionally hurt her too. So everybody’s hurt and no one apologizes. You hurt me so I hurt you back.