This week starts off with our Jersey Girls packing for the long anticipated camping trip to California. We quickly find out that as the packing is going on, there is a major hurricane coming up the coast and her name is Irene. Teresa at least acknowledges that a bad storm is coming and is worried about leaving her “girls”.

Teresa and Melissa are packing like they are going to be on one continuous ‘step and repeat’ and Jacqueline knows this and is struggling to pack for camping.

Chris Laurita tells us that all he wants for the men is to help the women get through this and all get along. Right from this point I am kind of put out as my feeling is that the ‘men’ shouldn’t get involved in the friendships or lack of friendship between the women. In my world anyway, the men support their wives, but don’t get involved as you know how we all are, one day we get along and the next we don’t and then we love each other again.

Albie is having a discussion with his girlfriend about her staying with him at his apartment for a while when they get back from California. Albie’s girlfriend Lindsey makes him very happy and it shows.

Irene is making its ugly way up the east coast and all the flights in New York, New Jersey, all up and down the east coast have been cancelled. The group will have to drive out to Pittsburgh which is a five hour trip and then fly to Houston and then get on a final flight to San Francisco. All the while, does anyone in this group really know just how bad this hurricane is? When Irene came up the coast I wished I could have gotten on a plane to the west coast. Lucky for them, bad for the children left behind. To their respect, the children were all safe and sound and I have no doubt that if they knew how bad it was really going to get they would have changed the trip. At least I hope that is how it would have gone down.

The five hour ride to Pittsburgh is more entertaining that I thought it would be. They show the ride and many funny things happen along the way. I could have done without seeing the “Joe’s” pee on the side of the road, but it was cute that Jacqueline was putting a whitening strip on her teeth.

Finally, we get to San Francisco and the gang heads out to pick up the RVs. Teresa thinks that going out to the “west” is going to the land of the “American Indian”.

Our leader for this trip is Chris Laurita and on the ride out to pick up the RV’s he explains that they are going to camp on the beach in a place called Half Moon. He then goes on to let us know what the ‘sleeping’ arrangements will be. He talks about how the “kids” may have to sleep in a tent on the beach as there may not be enough room for them in the RV’s. At first I was confused who he was talking about, but then realized he meant the adult kids as in Albie, Chris and Greg. My first thought was they are kids? However, in our family we do the same thing. Our children are our babies even when they are adults, it just is.

As the gang is let loose in the shop at Camping World to get supplies for the camping extravaganza I cannot stop shaking my head. Yes, they have to make some fun television for us, but really riding around in the store on the bikes. That surely will not set an example for the ‘kids’. Kathy does purchase a good book, “Camping for Dummies” that probably was the best purchase. They spent close to $4500.00 in “supplies” for a four day camping trip. Spending $4500.00 on supplies must be the new ‘glamping’ that is getting so much air time on all the housewife franchises this year.

So far we see glimpses of Al Manzo on this trip; he is being smart, staying quiet. While they are all riding out to the Camp Ground, Chris Laurita gets back into his patriarch role once again and lets the women know that one of the reasons for this trip is for them to get along. I like Chris Laurita, and have a ton of respect for him and his business work ethic, but I think he is out of his league here if he thinks by his words the women will get along.

The gang arrives at the “camp ground” which is really a nice parking lot facing the beach. “Crazy just rolled in” is what Caroline tells us and she is right on point. The men are inept at getting the site ready to enjoy and Melissa and Teresa decide to go out and meet the “neighbors”. The looks on the other camper’s faces are priceless. As they talk to the neighbors, Melissa is trying to be nice and Teresa is telling it like it is they are camping in a parking lot.

One thing Teresa and Rich agree on is their hatred for camping. Teresa and Kathy sit and discuss the recipes 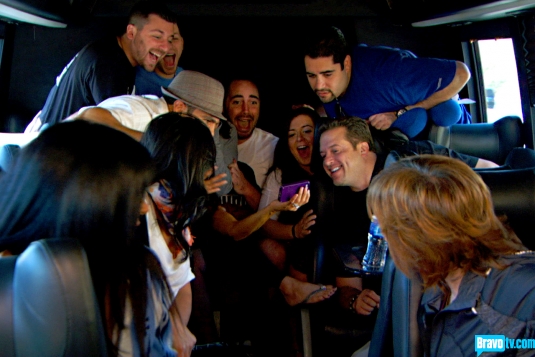 in the book incident. Or as I like to say the Pizelle’s incident. Both women say that the recipes come from “my mom”. Once again I say that in most families it is hard to really know whose recipes are which as the recipes get handed down over the years, all you really know is that they are family recipes.

We come to the first morning at the camp site and the male egos all come out. Joe Gorga shows “Tarzan” to all and then Richie walks around with his morning you know what and as Melissa says “that’s disgusting”. Are they really that desperate for footage that we have to be put through this? Or, as some have told me their egos are just that big.

Kathy talks to Jacqueline and Caroline about how she is starting to feel better with Teresa. Caroline tells Kathy that whatever is happening between them is just that and we will not interfere. Teresa and Melissa take their turn at talking alone. Teresa talks about the recipes again and Melissa tells her she needs to let it go and move on. Melissa puts it on the line with Teresa and really tells her that she needs to sit back and take a look at what is going on as Teresa has an issue with everyone and maybe it is her that has the issues not the other women involved. At this point Teresa looks at her and says, “oh really”. This scene had a ton of hits on twitter as there were people coming out and saying that Melissa hit the nail on the head and then there was the other side that said everyone is ganging up on Teresa and still talking about how Teresa’s family is jealous about her success. You be the judge, as this is what the producers want to happen.
Only time will tell what really is going on in this family.

“Hopefully we can rekindle our friendship during this trip.”

Alright I will admit this at this point I have to say that maybe just maybe Chris Laurita is right on taking the lead and getting everyone on this trip to work through their differences and put all of the relationships back on track. I know your all reading this thinking ‘yea right’ these are the Jersey Girls, well we shall see what the next couple of episodes will bring.