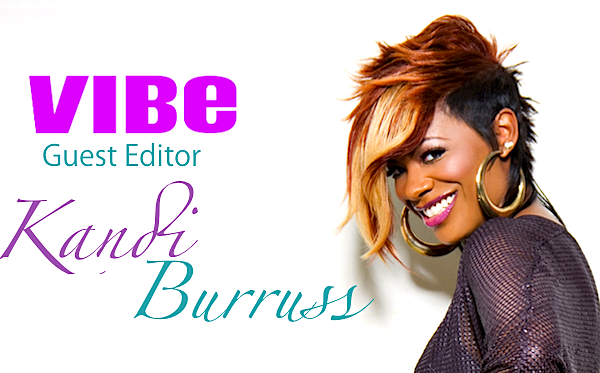 Kandi Burruss of the Real Housewives of Atlanta, was the ‘guest editor’ this week for Vibe Magazine and talked about the backlash from her cover shoot with Evelyn Lozada, Chrissy Lampkin and Tamar Braxton.

Some fans of reality TV and VIBE Magazine found themselves reacting after peeping the Sexy Issue cover–including cover girl (and Guest Editor) Kandi Burruss. The four femme fatales set the interwebs ablaze and did a good job of combating the e-haters that murdered their mentions.

VIBE caught up with the singer-songwriter to see just how much backlash she endured. As well, she dishes on meeting fellow reality celebs, Evelyn Lozada and Chrissy Lampkin, for the first time and explains why she was just a tad bummed that Sheree Whitfield made her exit. -\

VIBE: What did you think about the reactions for the Sexy Issue cover?
KANDI: Oh my gosh, I felt like it was overwhelmingly negative. So many people were just like, They are not role models. I mean, I got a lot of people that said, ‘You’re the only person that should be considered a role model.’ But any time I’m a part of a group or whatever, I don’t want to separate myself like I’m any better than anyone else. We’re all apart of reality TV. None of us knew that it was going have that title on the cover. We all know that reality TV can be a bit much sometimes.

Definitely. Was that your first time meeting the other girls?
Well actually Tamar and I have known each other long time, but it was my first time meeting Chrissy and Evelyn. That was my first time being around them and hanging out with them. When we did the photo shoot together, I really enjoyed myself with the girls. I understand how it is on television. People don’t get to see all sides of you. Of course, the part of television that gets the most viewers is when it’s drama or something crazy, so that’s what you’re going to see a lot of the time. Every now and then, I have my moments of maybe cussing somebody out or whatever; it may not be what I want you to see. Either way, I liked all of the ladies when I did the photo shoot with them, so I hate that it was so much negativity when it came to that.

People didn’t notice that in business, the cover girls really are role models. Beyond Bedroom Kandi and Kandi Factory, what else is on the horizon for you?
I don’t want to add any more new things at the moment. I just want to build what I’ve already started. Next month, I’m opening up my second location of my store Tags here in Atlanta. We’re going to have two now. I was happy about that because a lot of businesses aren’t really able to maintain in this economy, but mine is doing well. Also, with Bedroom Kandi, we’re taking it to the next next level–my own home party network. That really just takes numbers to a whole ‘nother level. With Bedroom Kandi, I didn’t realize I was becoming the face of something for Black women. I didn’t realize how many Black women were scared to talk about sex and sexuality in our community; it’s so hush-hush, so taboo.

Are you sad to see Sheree Whitfield leave RHOA?
I was. I thought she brought a lot, as far as the craziness of the show. I know people don’t want to be associated with it, but it did bring entertainment. Yes, I wasn’t feeling her in the moment we got into it, but it wasn’t enough for me not to want her there. She’s a cool person. The whole Africa thing irritated the hell out of me, but it wasn’t enough for me to fall out with her forever. It was a moment where she just rubbed me the wrong way. We’ve hung out a few times since then.

Can we expect any special appearances on Love and Hip Hop Atlanta?
No, unfortunately, but Rasheeda and I are super tight. I pushed for her to be on the show. My close friends that are in entertainment we always help each other. Me, Rasheeda and Tiny, we all hang out on a regular basis. We always try to help each other come up. We boost each other.

My only issue with the cover was that Vibe called the women our new role models. My role models have always been strong women, who don’t fight, physically or verbally attack each other. Are hard working, avoid controversy and don’t sleep around, women who in the face of adversity still act and behave how a woman should.