The season 8 Real Housewives Of Atlanta has finally aired.

Phaedra Parks is planning the season finale party, why? It was a winter wonderland party. Porsha Williams visits Phaedra and tells her that the FBI raided Kandi Burruss’ house to confiscate Apollo Nida’s vehicles. The two mull over if the ladies think that Phaedra called the FBI.

Matt brings Kenya her two new puppies, who she calls, King and Twirl. Kenya purchased her new pups, but she explained they were too small to take in until recently so Matt had brought them to her.

Cynthia plans to massage Peter which was supposed to culminate in an happy ending. Halfway through Peter’s massage, Cynthia’s ex and teenage daughter, Noel, walked into the house. The moment was lost. 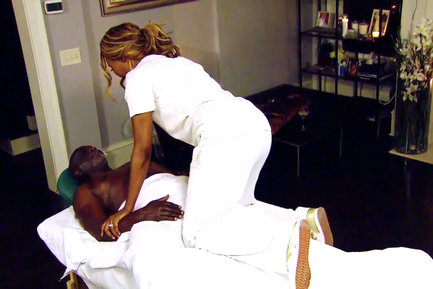 Peter gets a massage from wife Cynthia

Phaedra’s son Aidyn was dressed as an Elf, who had the responsibility of passing out coal to anyone he deemed “naughty,” which was everyone.

Sheree noticed Tammy was talking to Bob. Sheree heard rumors that Tammy used to sleep with Bob, she was not pleased.

“Did you or did you not tell her you slept with me?” Tammy asked Bob. 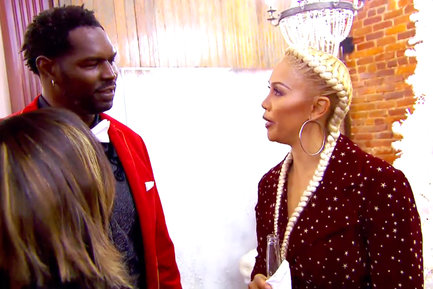 Bob responded, “Is it hot in here? Me and Tammy are just friends. I’ve never had sexual relations with that woman.”

Bob blamed brain trauma for why he said that to Sheree. Tammy then said what I’ve been saying, “Y’all need to go just go ahead and get back together.”

Busy body Kenya mentioned the Feds, to Kandi, Cynthia, “Do you think Phaedra may have made that call?”

Cynthia and Kandi didn’t know. When Phaedra appeared in the conversation and they asked her if she’d done it, Phaedra excused herself.

Nene and Kandi putting the past behind them. The party ended with a clog and tap-dance performance by Phaedra and Chris.

What are your thoughts? Post your comments below. Who should return for RHOA 9?

More in Real Housewives Of Atlanta, Reality Television (1233 of 3074 articles)