At Yolanda Foster’s dinner party, her first hosting in 3 years, since she starting breathing, walking and talking again  – Lisa Vanderpump decides to ask Erika Girardi about her comments to Kathryn insinuating she was a master spider web weaver.

Erika of course was disappointed in Kathryn blabbing to Lisa V.

Erika: “F*cking c*nt. Why would you do that to me? What can I say? I spoke to Katherine in confidence, and that f*cking bitch ratted me out.” she told cameras. 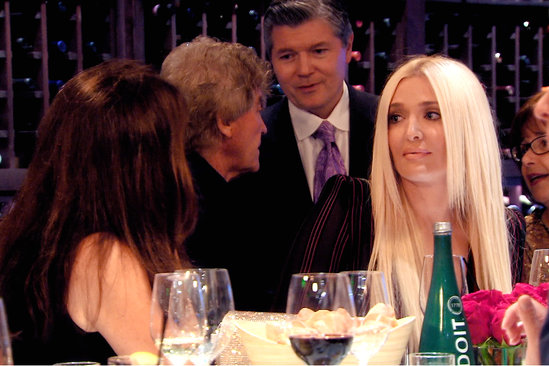 Lisa V and Erika got into it about Erika’s comments. Erika believes Lisa V is playing all sides and everyone involved. Lisa had asked Erika how long she’d known Yolanda, and she was not pleased by this line of questioning, she thought Lisa and Kathryn asking her about her relationship with Yolanda was suspicious. May be they just wanted to know, or they thought, she wasn’t as close as they are letting on. I don’t believe Yolanda and Erika are that close. Yolanda hasn’t even been to one performance of Erika’s not the basis for a friendship I know, but it’s something.

Erika asks Lisa, “Why would you want to know how long I’ve known her? It is a basic question, but I believe your intent is something different. And I’ll leave it at that. Why do I feel like there’s something behind it? Here’s the thing. I feel like you’re trying to discredit my friendship with Yolanda.”

There is too much conversation that ends up on the cutting room floor, that half of the issues are told very well. Instead of airing these things, production and Bravo airs, ‘Secrets’ episode that are just fluff pieces.I’m still waiting on the footage from RHONY’s, Scary Island mess with Kelly Bensimon loosing her nuts.

Yolanda is a weird, she throw a party inviting everyone she has accused of telling lies about her children. Lisa and Yolanda still on the outs, didn’t talk alot as far as we can see, but Lisa did make sure she had Yolanda’s ear to defend herself: “I would never, will never and have never said anything derogatory about your kids.” Lisa sounded tipsy again.

To the camera, Yolanda says, “I wanna believe that everybody in this world has the best intent with my children. But obviously, they don’t.”

– he has a beautiful voice, what a lovely surprise.

Lisa V’s friend Mohamed Hadid, has built Lisa and her tiny horses a tiny home, she is ecstatic. 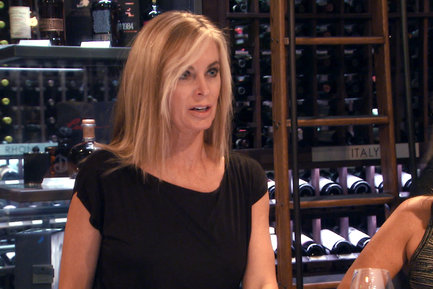 Eileen Davidson who seems to be holding her own as of recent and coming out of her husband’s weird domineering shadow and Lisa Rinna’s overpowering spirit, meet for drinks. Lisa R wants to know why her friend was not mad at Lisa V.

Why should my friends be mad at my frenemies?

Eileen is tormented as she likes Lisa V,  “I have a great connection with her. I feel really between a rock and a hard place.” 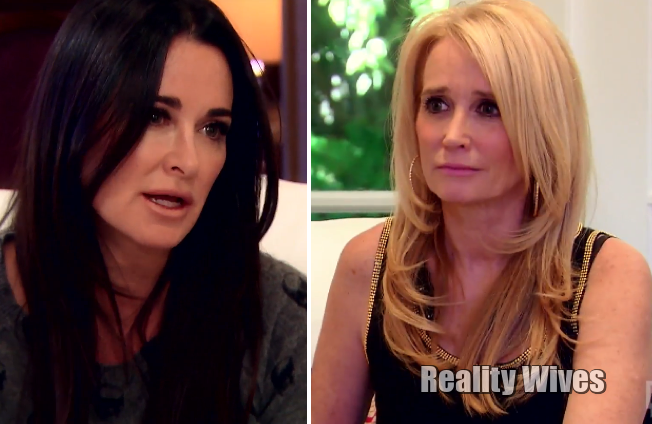 Finally, Kim Richards makes her return to RHOBH and the cameras are there for when she has her first conversation and sighting of a meeting with her sister Kyle Richards.

She tells Kyle, “For us to bring things up from the past can be so detrimental because I think that’s just stirring up old stuff that isn’t healthy. I love you, but I have these feelings of resentment, too, when I was upset, too. But when I started remembering a lot of good stuff, it made it easier to pick up the phone or to text you to say I love you, I miss you. It was easier because I was feeling those feelings.”

Kyle seemed emotional and shed tears, “I feel bad to say that a lot of it depends on her sobriety because that sounds like I’m putting all the blame on her, and it’s not all her fault.”

Kyle brought up Brandi Glanville, and wants to know why Brandi has to tweet every time she’s with Kim.

On one side is: Erika, Eileen, and Yolanda and another side is Lisa R, Lisa V, Kyle and Kathryn.

Lisa Rinna: “Lines Are Being Drawn In The Sand”