I haven’t written a blog on RHONJ in a while, but I felt compelled to after last night’s episode.

Chris and Jacqueline Laurita have joined forces with Ashley‘s father and step mother ‘Matt’ John Madison Holmes and Jodi Sue Holmes at dinner. Both sets of parents are trying to instill some sense into her. Ashley wants to move to California and plans to get a job and go to school which is a great idea. We were all 20 years old once, at 20 depending on the maturity of the person, you are either considered a child or a young adult. Everyone has different experiences and a different outcome. At 20 I was living by myself, working full time, school part-time, paying rent, bills, it was hard, I barely got enough sleep and didn’t eat enough. But I was doing it. Whether your parents are rich or poor, spoil you or are strict, at 20 you are capable to making your own decisions and accepting the consequence of your actions.

I made it a point to not tweet or blog about the children under 21. Especially after watching season 3 of The Real Housewives of Orange County. No I am not going to go ‘in’ on Ashley. But I will say this.

All the housewives of New Jersey are tweeting and re-tweeting how everyone loves their parents and this kid is a good kid and it’s tough to watch etc,. You may have made up but we are just now seeing the footage of bad behavior. The way both the parents and children talk to their parents is deplorable. Parents cursing at each other in normal conversation, children then in turn using foul language, to address their parents and lacing conversations with (gd – damning g_d) is NOT normal, it is wrong!

The way Ashley spoke to and about her mother was absolutely disgusting! “She’s a b”, “Mom’s so immature.” What? Even thinking about the dinner scene makes me sick. How on earth can you talk to a young adult who has so little respect for her parents on national televion? If I ever spoke or even thought to address my mother or father that way. I would have been asked to leave. Tough love? No Respectable love.

I see people posting on facebook and twitter, ‘it’s the parents fault’ or ‘it’s Ashley’s fault’. It’s EVERYONE’s fault. The first time my daughter calls me a ‘b’ she is being punished and the second and last time she disrespect me… – I love you, but you are not staying here, this ‘b’ doesn’t call you names, so therefore you need to leave. Jacqueline’s crying was hard to watch and listen to. I would like to believe when Ashley is older, she will cringe at her behavior and pray her daughter never treats her like how she treated her mother.

Teresa and Joe filmed a scene at their lawyers office, I never thought we would see that. Teresa was cleared of all charges while Joe owes $260,000 for signing his ex-business partner’s signature on a legal document. Joe admits this was wrong and Teresa agrees. Excuse me, but what made you think that was ok in the first place? Signing someone else’s name without their consent is forgery.

Teresa: See? You have to lie

Last year it was reported, due to the fact that the Giudices’ filed bankruptcy their personal items would be auctioned. Their lawyer explains that the items can be purchased with her own personal funds.

Joe: At least Teresa gets to keep her shoes

Kathy hosts a ‘goddess’ party and invites Zen Jen to purify the air and sell bracelets, she invites friends and family over, including Teresa, Melissa, Caroline and Jacqueline.

Rich: She can show her friends and family that she really can cook, that she’s not stealing recipes from her mother and mother-in-law and putting them in a book

Victoria wants to wait for ‘Aunt Teresa’ before she excuses herself as she has to go study. Jacqueline is shocked as Ashley wouldn’t never do that. See there are some children that don’t embarrass their parents.

The housewives discuss the Giudice’s money problems and are glad that it is finally over.

Teresa arrives late to the party and everyone starts to eat. Teresa, I had hoped would be friendly, she was not, she played the Debbie downer part to a ‘T’.

Kathy: “When things seem to be going crazy around you, you can just put a smile on and just bring it.”

Teresa: “I just hope that was a compliment.”

What makes matters worse is when Melissa said she and Teresa had not spoken in years, as she started to hang out with Kim G. (Where was Kim this episode?)

Teresa: “Why do you say years? Did you not come to Audriana’s first birthday party?

Teresa interrupts Kathy, who announces she is opening a catering business, by informing everyone that she and Joe are opening a restaurant, good timing. This scene was horrible. What was Teresa on? She just appeared to be jumping on everyone and to turn the focus on herself. Me, me, me!

While at home, Jacqueline and Ashley start to argue again, Ashley calls her mom a ‘b’. Chris asks Ashley to pack her bags and call a friend to pick her up.

Next Week:
Black as Ink – Caroline’s pride spills over when her two sons set out to launch their bottled-water line. Meanwhile, Lauren’s grand opening for her cosmetic venture brings Jacqueline together with her daughter; and Teresa’s brother attends her book-signing event.

I have said this before, this is the first time the women of a Real Housewives series are all married. 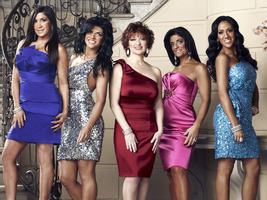