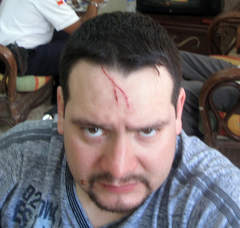 Jason Gomez who filed a lawsuit against the 'Real Housewives of New Jersey' reality TV show.

Two lawsuits allege that Joe and Teresa Giudice, who star in “Real Housewives of New Jersey,” assaulted a Chicago-area police officer and his cousin at a Dominican Republic hotel bar in February. (June 13, 2011)

“Real Housewives of New Jersey” cast members beat up and injured a Chicago-area police officer and his cousin during a brawl this year at a posh Dominican resort, two lawsuits filed Monday allege.

Adolfo Arreola, an officer with the University of Illinois at Chicago’s Police Department, suffered a broken arm, blurred vision, cuts and bruises after some members of the cast “savagely beat, kicked, punched, scratched, jumped” on him and smashed glass on his head, according to the lawsuits. His cousin Jason A. Gomez suffered a broken leg and a torn knee ligament after he came to Arreola’s defense, the suits said.

The cousins’ lawsuits — filed in New York and Miami — allege that they and their families were dancing and socializing in a Hard Rock Hotel & Casino bar in Punta Cana, Dominican Republic, on Feb. 23 when “Housewives” star Teresa Giudice sprayed champagne on Arreola’s mother-in-law and mocked the 53-year-old woman as she tried to wipe the alcohol from her eyes.

The complaints state that after Arreola confronted Giudice, he was attacked by cast members, including Giudice’s husband, Joe, and Albert and Christopher Manzo, the sons of show matriarch Caroline Manzo.

All three men have supporting roles on the popular reality show, which follows the conflict-riddled lives of five women from northern New Jersey. Since the program’s debut two years ago, the cast’s public melees and physical altercations have fueled gossip sites and the show’s ratings in near-equal measure.

Bravo, the cable channel that airs “Real Housewives of New Jersey,” is named in the New York complaint. Thomas Demetrio, the lawyer for Arreola and Gomez, has asked Bravo to preserve any potential video taken of the fight. A spokeswoman for Bravo said the network and the cast members decline to comment on the accusations.

The cousins also sued the Hard Rock Hotel’s parent company in Miami, alleging negligent security and intentional infliction of emotional distress. Ricardo Cata, a lawyer for the hotel’s operator, said he had not seen the lawsuit but said the hotel did nothing wrong.

While in the Dominican Republic, the cousins signed an agreement not to sue, but Demetrio said they did so under duress.

In their lawsuits, the cousins allege that the cast and crew had been served “excessive amounts of alcohol” at the bar and became “intoxicated, belligerent and rowdy” — a scene reminiscent of a recent episode in which Joe Giudice and his brother-in-law scuffled at a lavish christening party. With 2.8 million viewers, that May 16 episode marked the biggest season premiere in Bravo history.

In addition to the Giudices and the Manzo brothers, the lawsuit filed in New York also names the Manzos’ roommate Gregory Bennett Jr. as one of the assailants. Bennett shares an apartment with the brothers, who star in their own spinoff reality show on the Internet.

Arreola, 42, told the Tribune that his family had flown to the Dominican Republic to attend a vow-renewal ceremony for his wife’s aunt and uncle. Shortly after midnight Feb. 23, he and family members went to a hotel lounge and found seats near the VIP section where the cast was gathered.

Martinez, a grandmother of four who is also suing, said Giudice deliberately sprayed the champagne into her face and all over her body. As Martinez tried rubbing the alcohol from her burning eyes, cast members stood around her, laughing, she said.

“They were laughing at me like it was funny,” she said.

Arreola, who was on the dance floor, walked over to Giudice and asked her to stop, he said. The Manzo brothers began yelling obscenities, Arreola said, and he identified himself as a police officer. According to the lawsuits, cast members then pounced on him.

The cousins say some cast members, including Teresa Giudice, told police they sustained scratches and bruises in the brawl as well. The cousins denied punching Giudice in the face, as was reported on some gossip sites immediately after the fight.

On Feb. 25 — two days after the encounter — the cousins were given release forms to sign and were told they would be allowed to leave the country once the paperwork was completed. According to the cousins, the documents stated that in exchange for dropping the matter, the men would receive $25,000 apiece as long as they agreed never to sue or talk about the incident publicly.

Gomez said he encouraged Arreola to sign the documents so they could leave and have their injuries taken care of back home.

Arreola, who has worked for the UIC police for about 15 years, underwent surgery on his right arm after returning to the U.S. and is undergoing physical therapy, Demetrio said. Arreola, who shoots a gun with his right hand, cannot return to his job until he can requalify on the gun range.

“I’m worried,” said Arreola, who had six screws put in to repair his arm. “I only have five years left until I can retire.”

Attempts to reach the network and production company for comment were unsuccessful.

Local authorities seized Arreola’s and his cousin’s passports. And at one point, an attorney for the police ordered him to sign a “release of claims” form involving the television show, Arreola said, recalling the attorney told him it “was for my family’s health and well-being.”

“I took that as a threat,” Arreola said. He responded to the attorney “‘You’re telling me family’s health and well-being is in jeopardy?’ And they said ‘yes.’”

“I was scared for my life. If they told me to chop off my finger, I would have gave them my finger to get out of there,” he said.

said he called the American Consulate multiple times, but got no assistance.

“They [consular employees] told me that I should have read the blogs a little better, that this is a Third World country, that they’re one of the most corrupt countries, that because of the political ties [with the] United States they are unable to help me,” Arreola said.

In the end, Arreola signed the agreement, though his attorney William T. Gibbs, of Chicago’s Corboy & Demetrio, said such an agreement can’t be signed under duress and that it’s null and void. Because of their injuries, neither Arreola nor his cousin, an electrician, have been able to return to work.

The lawsuits seek at least $50,000 in damages from the cast and hotel.

Gomez had surgery on his leg and now has two pins in his knee, he said. Still on crutches, he does not know when he’ll be cleared to return to work.