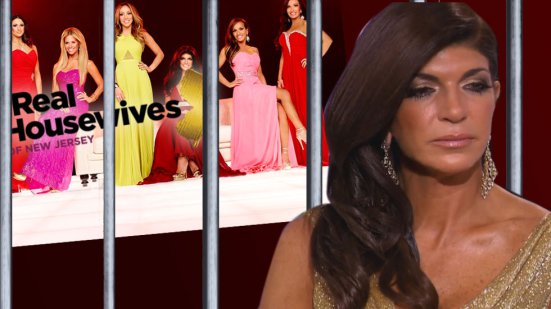 Bravo TV is reportedly considering cancelling Real Housewives Of New Jersey since Teresa Giudice is imprisoned. Teresa plead guilty alongside her husband Joe Giudice to federal mail and mortgage fraud and tax evasion and was sentenced to fifteen months in prison. Teresa surrendered herself to a Danbury, Connecticut prison on January 5th where she will serve the remainder of her time. But a source close to the Real Housewives Of New Jersey production says that show is on the chopping block saying:

“At this point, The Real Housewives of New Jersey is essentially done. Bravo has considered all of their options and they don’t feel like there is really a show without Teresa. Whether the other women want to admit it or not, she is the star of the franchise. The show simply wouldn’t be the same without her. Realistically, she wouldn’t even be able to begin filming until 2016. Filming typically takes 4-6 months, and then production still has to edit the footage. That would be way too long of a delay for the series. No one has begun filming for RHONJ. The future of the RHONJ is clearly in jeopardy, as there hasn’t been any talk about beginning anytime soon. Bravo is done with Teresa and wants nothing to do with her family. The legal drama was too much negative press, and the Giudices were always demanding more and more money. It just wasn’t worth it.”

Would you watch the Real Housewives Of New Jersey without Teresa Giudice? What are your thoughts? Post your comments below.