Rumble in the Jungle

Tamra and Eddie have dinner with the Dubrows, Tamra tells the couple she blabbed what Terry had said about Alexis. The two couples think this is hilarious. The ladies comically suggest they are going to have an intervention for Alexis. This should be healthy and a great idea.

The ladies are all packing – Alexis packs and talks with her assistant. Heather is packing with the aid of a stylist. Gretchen 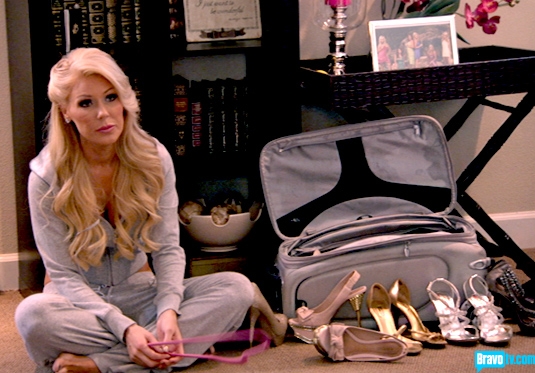 asks for help as she doesn’t know what to wear, her boyfriend Slade Google’s what to wear in Costa Rica and reads some suggestions. Gretchen is stressed as so far she has nothing on the list. She bites off Slade’s head and he leave the room, again emasculated.

Alexis arrives at the airport first, then Heather who is so very uncomfortable around Alexis. Why Heather? You can handle yourself and isn’t Alexis beneath your station? The ladies are meeting Vicki in Miami and then they all fly to Costa Rica. Did Vicki need to have the women hold her hand, why not fly by herself?

Once they arrive, the Alexis gang up continues, the ladies point out that Alexis is wearing a huge fake engagement ring, which she wears so as not to assert attention to the thieves. Of course the obvious choice is to wear just a plain band or no ring at all, but this is Alexis. Why this bothers the women is beyond me. Again something else Alexis has done to offend them, she tells the ladies she is leaving the trip after only two days because she has three children under five, Vicki points out that Heather has four children under seven, Heather corrects her they are all under the age of eight. Why does this bother the women so much, all they do is talk about Alexis behind her back, talk down to her, complain she is a whiner, she tells them she is going to leave early because she wants to and they don’t like that either; they should be happy she is leaving. What have we learned class? There is nothing Alexis can do to make the ladies happy.

It seems that everything Alexis is doing is upsetting to Tamra, from her attire to her thoughts. 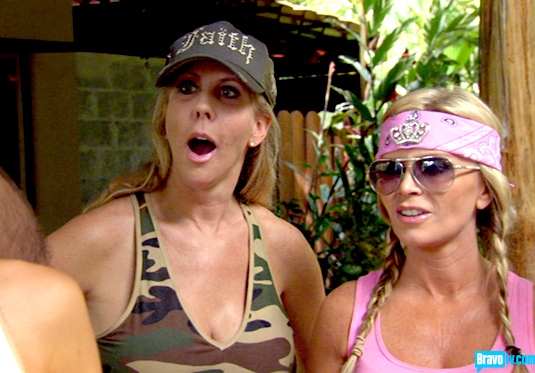 The ladies go zip-lining, and the instructor braids Alexis’ hair back so it wouldn’t get in the way, Tamra and Vicki’s mouths on the floor, they apparently are shocked as they are in the 1940s. Alexis is giving everyone instructions on how to zip-line, but when it’s her time to go she freezes and freaks out. Heather, Gretchen and Tamra revel in this as Alexis continues to be the butt of everyone’s jokes.

Later, Gretchen arrives at Alexis’ room and Alexis asks her about the tension between her and Heather. Gretchen states she doesn’t feel the tension as it was directed to her. What? Nice Gretchen, good way to stay out of the drama, be stupid. Heather arrives at Tamra’s room and they continue to talk about Alexis, of course.

At the dinner table, Heather asks Alexis if Jim is joining the men, as Slade called him and Terry would be calling him too. Why would Jim want to hang out with Terry and most importantly why would Terry want to hang out with Jim? Alexis obviously in uncomfortable especially after what Tamra said to her. Alexis brings it up and then states her husband 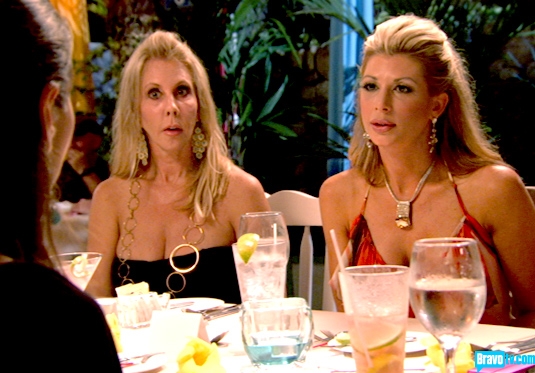 wouldn’t be hanging out with someone who called his wife a name. Heather decides to tackle the issue and handle the problem. Heather tells Alexis she overheard Jim in Nordstrom’s state that the sneakers he was currently looking at with his son are very expensive and the best, someone call the etiquette police, bragging should be outlawed. Then Tamra who is enjoying this crap fest and smirking her face off and Gretchen chime in on how Alexis is pretentious and telling everyone who has ears she has money, I believe Gretchen made her point in the case against Alexis, as a friend, but if this was such a problem, wouldn’t a friend have said something before hand and not in front of the gang, especially knowing what Alexis was like? If you had problems with Alexis your issues with her should have been brought up before a group trip. The Bragging Bellino’s, who tell everyone about what they have, according to Tamra, that behavior is frowned upon. “Ladies” in glass houses shouldn’t throw, stones, ex-husbands, plastic surgery, insults,. etc.

Vicki was actually nicer than normal this episode she didn’t want to gang up on Alexis. But did make some valid points that you don’t have to brag about how much money you have.

If Tamra was saying these things to try and better Alexis then it wouldn’t be so bad, but it’s obvious she nor Heather like Alexis and this intervention was meant to embarrass Alexis not to help her. They laugh and talk about her behind her back then this. This episode should have been called “All About Alexis“, then Tamra has the nerve to say Alexis behaves the way she does because she is probably lacking attention from her husband. So what does that say about someone who always has Alexis’ name in her mouth, you must be starved for attention then Tamra; you don’t like Alexis, we get it, but keep it moving. Alexis is a wanna be, fake Christian, not wearing enough clothes, barbie, but I don’t harp on that every week. I actually felt sorry for Alexis this week. She’s sweet, naive, very blonde and many times says things that leave me scratching my head, but being eaten alive by the wolf pack, wasn’t nice to watch.

Next week the ladies’ getaway in Costa Rica turns tense when Alexis responds to accusations aimed at her by Heather and Tamra. Elsewhere, the wives embark on a white-water-rafting adventure, but it’s a shaken Vicki who makes waves.

The Few, The Proud, The Marines | Ryan Culberson

More in Real Housewives Of Orange County (264 of 364 articles)