The Honeymoon is Over
I have to admit going into this blog not sure which direction to go in. As a “positive” writer I do not want to get trashy and turn this into a negative, but have to say this one is going to be difficult. Here we go. 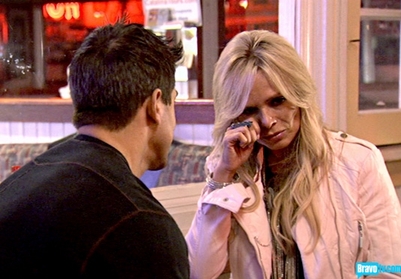 We start this evening out with Eddie being extremely mad at Tamra for the whole Brooks putting his hand on her boob debacle. Eddie rightfully so, should be upset, that is his love at this moment and men are jealous by nature. Yes they are girls, and you know it. Don’t you think that all Eddie wanted to shout out was “grow up”! As Vicki and Brooks wait at the dinner table they are discussing how alcohol has played into Eddie and Tamra’s argument. What stood out in my mind was when Vicki is asking Brooks if they should order wine with dinner and then proceeds to say, “Wine before liquor is quicker but makes you sicker.” Really Vicki do you have experience with this?

Heather Dubrow and her husband enjoying dining out. Seeing Dr. Dubrow talks for the first time was actually, interesting and my guess is that he really has a great personality. Funny, lighthearted and doesn’t take any of these women too seriously. As Heather is still getting used to the cameras following her she seems tense and condescending stating that Vicki’s party was a “little low rent”, was not a good thing. We’ll wait and see what Vicki has to say about that down the road. Then Heather goes on to talk about having a get together for the women and states that “I don’t know the girls very well, and don’t want to have them at my house.” Again I say Wow! Although, to be fair, there have been times in my little world that I haven’t wanted to have people over to my house, not for those reasons. Sometimes we just don’t want anyone in our personal space. So what did we really find out about Heather in this dinner scene? She is a picky eater. Now that was exciting!

Eddie and Tamra show up at the dinner table to finally meet with Vicki and Brooks still in Catalina. You can see that Tamra is still drunk. Tamra steps up to the plate to say that she “doesn’t want Vicki and Eddie touching.” Smart move Tamra at least you do apologize and admits it was the alcohol.

We now move back to the OC and holy acting did I just see Slade has been asked to do a comedy set? Oh this will make me cringe for 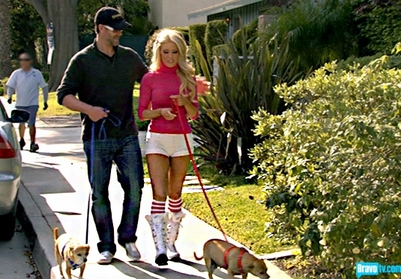 sure. Good moment, when Gretchen and Slade go out to walk the dogs, she is wearing tennis shoe boots! Now I have seen everything, but if anyone can carry it, it’s Gretchen! Slade a comedian? Gretchen, I don’t know where he comes up with these ideas either. Yes Gretchen, comedy is extremely hard. Slade, a career in comedy, now that IS funny. Yes this is getting worse by the minute. When we get to see Slade doing stand up, I would love to be up front and center.

Catalina again, back on the boat home. Tamra is sick, maybe too much to drink last night? Yep! Again with the Brooks hand on the boob. Tamra and Eddie do have a nice conversation about their alcohol induced argument from the night before and this makes me start to think that maybe just maybe Tamra and Eddie have something. Something other than a rebound fling. Go figure. Eddie makes the suggestion that they “don’t drink anymore” with Tamra just staring back at him. How long before we see these two drunk again.

We watch while Heather call the girls on the phone to invite them to her Painting Party and just when you think you are going to snooze we hear the girls reactions. We hear things like “are we going to get dirty?” believe there was a “boring” in there and maybe even a “this doesn’t sound like fun”. 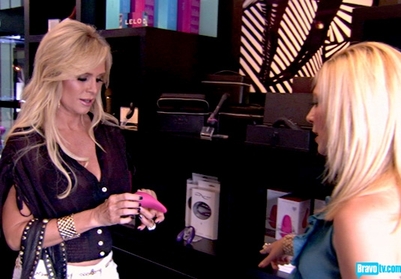 Tamra and Gretchen get together at one of Tamra’s friends store; let’s see another housewife promoting a friend. It’s a sex toy store no less. As they frolic through the goodies I am thinking, here we go, we have to go for the shock factor and talk about sex toys. Do you not have anything else to talk about? I’m really trying people to keep this upbeat! Guessing that the reaction to this will be that the fans didn’t really need to see the sex toy stuff. Most of us are from the school that what goes on in my bedroom, I will never tell, you can tell by my smile and attitude! Seeing Gretchen and Tamra get along is a good thing. Those two beautiful women have more in common then they realize.

And here we go at the painters shop and Heather now is promoting another person, this time a caterer who worked all week on planning a no carb lunch for the women. Ok, I get it, I am a small business woman and would love all the free publicity that I could get on Housewives, but at what point does it stop being an infomercial?

As Vicki arrives first at this get together, you see that she has changed a bit. Changed you ask and how? Well in most of the previous seasons she was always stating that she “worked” for a living and couldn’t come out during the day. My thoughts are, that is a first, what, she does not have to work today?

As Alexis and Gretchen are being driven to Heather’s luncheon they take time to discuss the falling out with Peggy. Alexis says she had four months to talk to her. Alexis says she wasn’t going to go over anything with Peggy now. She is pretty much done with Peggy. That really is a sad story, don’t you think that if everyone had come clean from the beginning that this would never have happened? Maybe Alexis and Peggy would not have been friends, but at least it would have been all out in the open. Not in my case, but in my circle, there have been friends who have dated each other, we all have a past people, it only matters that the person you end up with is all yours from now to eternity. The truth always comes out anyway, so you might as well tell it up front. Gretchen and Alexis also discuss the bracelet that Tamra presented to Gretchen and Alexis sees that as very touching, and goes on to say “be wary”. There is so much I would love to cover about Tamra and Gretchen, so come on future episodes, let’s get this party moving!

Tamra shows up at the luncheon and is still not feeling great. Still throwing up. At your age, you shouldn’t be drinking so much; your stomach can’t handle it anymore. loved Vicki’s reaction, “are you pregnant?” “No babies at our age”. And Tamra’s response is “What, we are not the same age” That was a laugh out loud moment for me. Does anyone else wonder why Vicki always covers her mouth when she eats?

[FrontpageSlideshow fs_cats=1174 fs_slides=36 fs_show_prevnext_buttons=1 fs_main_width=445px fs_main_height=295px fs_slide_width=445px fs_text_opacity=1% fs_rounded=0]
Now that all the players are at the painting party, Heather begins talking about opening a restaurant, boring, Vicki is surprised about Tamra and Gretchen are spending time together, and Heather brings up again what happens in your bedroom stays in there. Like Vegas Baby! Ok, couldn’t resist that one. Tamra is really doing everything she can to get Vicki on the war path by hanging onto Gretchen, and Tamra is getting to Vicki on purpose. I wonder what happened during the off season between those two, or is it Tamra’s attempt at getting the “friction” started between them to make for better television? It didn’t work just yet with Vicki, but you can tell she is stewing about this. The women paint, some of the men turn up. By now I can’t keep my eyes open as this was not a very entertaining episode at all. Although, you can tell that some really good story lines are coming up and this episode seems to be the setting stone for the rest of the season. We shall see.

My OC Women have never let me down. My favorite of all the Housewives franchises is this one, the original and I’ve liked and disliked these women over 6 plus seasons now. So I want to be able to start writing the positive about these women, come on Orange County women let’s get to it. Coming up, Slade and Gretchen discuss the Tamra renewing their friendship. The Brooks stuff just hit the fan. “Two faced” says Slade. Slade is correct about everything he says about Vicki and Tamra. This will be discussed at length next time around, as I’m sure after the next episode, there will be plenty to discuss!

Next Week: Who’s Laughing Now
Tamra’s budding friendship with Gretchen affects Vicki; Alexis and Heather try to make amends over lunch; Vicki and her daughter have a deep conversation about Vicki’s new boyfriend; and Slade tries to launch a new career as a comic.

More in Real Housewives Of Orange County (278 of 364 articles)