Tamra visits Vicki and they proceed to cook. Tamra asks Vicki why she never said goodbye to her when leaving the painting party. Vicki’s response. “I left”. Is that a new Coto thing, to use a reply that has absolutely no meaning? She 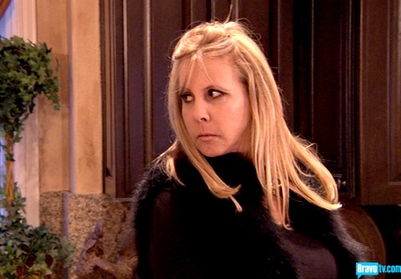 also was over everybody. And then she was sure she said goodbye to Tamra, but wants to know why Tamra is chummy with Gretchen, ahh now we get to the nitty gritty.

Vicki then asks Tamra if she thought it was strange *insert screeching voice & sarcasm* that now, she and Gretchen were now friends and bff’s and calling each other 700 times a day. Please note Vicki is almost 50, her behavior is unwarranted and childish. Vicki isn’t jealous; she on the verge of single white female. Vicki, what we think is strange is your current fascination with Alexis. That’s cray cray. But to hear Vicki talk about her, you would think she gave birth to her. I love Alexis, I can see her side to every story, she’s got an amazing husband, amazing marriage, perfect kids, perfect body, perfect face. We go shopping all the time and we go to charity events and we give totally give back to the world. Ummmm, ok. We need Bravo to film these women during the off months so we can figure out what the hell happened.

Tamra said Vicki is her best friend, why didn’t Tamra know this already?

Tamra brings Vicki one of the toys she purchased from her friends sex store. Vickie wasn’t having any of it. Vicki reminds me of Sheila Jackson the character played by Joan Cusack in Shameless. All those facial expressions and the shrieking. Pornographic is not biblical. Since we’re going there Vicki, neither is divorce, adultery, cursing or shrieking like a banshee, etc.,

Vicki: I didn’t even know they were friends. It Sucks.

Sucks for whom Vicki? You claim to be a Christian, isn’t part of being a Christian, to forgive? Wait a minute, what on earth has Gretchen done to deserve madam Vicki’s wrath? Vicki suffers from selective Christianity. Yes I said suffer and no that is not how a Christian behaves. Vicki also states that Tamra will get a brown nose, as Tamra has her nose so far up Grethen’s —. Vicki must be missing Tamra’s nose.

Alexis and Heather have lunch. Alexis is offended when she was asked if her brand of journalism was more Gillian Barberie or Katie Couric. Alexis is way out of her element when trying to 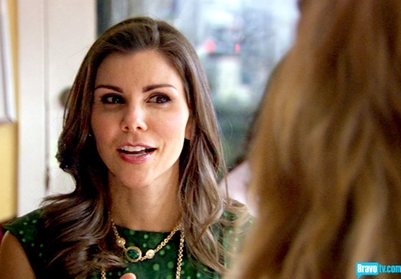 Alexis: Heather comes across as kinda floity toity. She thinks that she is better that the rest of the group.

Floity. No Alexis, the only person she thinks she’s better than is you, sorry. Watching Heather and Alexis is painful. Heather is obviously bored and believes she is speaking to someone lower than her station (Mary Amons reference). Alexis is trying, so hard to make a good impression. The cherry on the cake was when Heather said 喝采 lol that’s how it’s spelled, but pronounced Kanpai, cheers in Japanese. Alexis’ head almost flew off her neck, she must have been thinking, but we’re in the United States. Heather, let’s keep speaking the only language Alexis knows, which is, blonde.

Slade’s mother Liz, is going to be his test audience for his comedy show. His segment was dry. Why does Slade have a microphone in his living room?

Liz: The dogs are really more entertaining at this point than you. 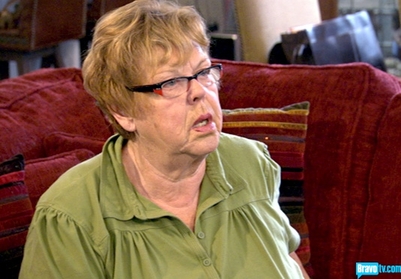 Liz needs to take her show on the road, she is funny. Slade’s conversation with his mother about what he desired to do for a living was strained. Isn’t he over 40? It was as if she was speaking to an 18 year old. Slade then states he is very interested in proposing to Gretchen. Very interested? That’s what I want to hear, my man says he is very interested in proposing. Liz, retorts, but she’s your boss. Strange response Liz, he is sleeping with his boss. Or was she saying, get a job before you marry her, just in case her business falls flat, at least then your wife will have something to fall back on and respect you. But again, I could be wrong. Then mother Liz, deciding to placate poor Slade said, well you’ve worked out all your differences. Really? She doesn’t call you tubbawubba anymore. Liz *drops her mic* and bows to a standing ovation. Thank you very much ladies and gentlemen.

Eddie on his leisurely stroll with Tamra, asks her if they should move in together. She doesn’t seem too keen and her divorce isn’t final yet.

Slade shows Gretchen some of his material for his stand up routine, one of the pictures is Tamra looking curvy, immediately Gretchen is shocked. If Gretchen really wanted Slade to not say anything about the ladies, he wouldn’t, think about it. Thank you Bravo Producers, for stirring this pot yet again.

Now onto Gretchen ‘hosting’ the comedy night and Slade’s lackluster performance. Their performance ratings.
Gretchen* ★★
Slade ★★½
* Before and after she stripped.

Both Jim Bellino and Terry Dubrow were mesmerized by Gretchen’s body. I think you’re great Gretch, but comedy is not for you. The same goes for you Slade.

Tamra and Eddie go out for dinner. Simon won’t sign the divorce papers. I am sure Simon will tell a different story. Tamra tells a story that her daughter Sophia was curled up in the fetal position crying and stating that there is no more room in their family. Was Sophia saying this about Simon’s girlfriend and if so, did she do the same thing for Eddie. Tamra fears that she will lose her job if she marries and moves in with Eddie. Has Eddie had a secret conversation with Tamra, stating he wants her in the home? Probably not. So where did Tamra get this from?

Have you noticed during Vicki’s interviews the lighting on her face is super bright? 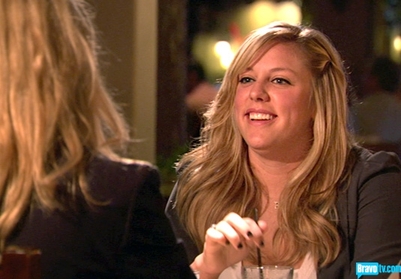 Vicki has dinner with Briana. Vicki states she had a coldsore, which is herpes simplex virus-1. No it’s because I really had a cold sore. Vicki a cold sore is herpes. Did Vicki suffer from them before Donn or after Donn. Vicki states that she wanted to go to counselling, really? Donn has no interest in reconciliation. Something doesn’t sound right there. Briana has to have her thyroid removed as the tumors she had last year have returned and are spreading. Brianna is such a smart, hard working woman, I pray she gets through this illness quickly. 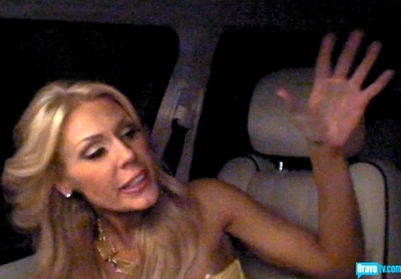 The episode ends with a tipsy Gretchen taking offense to what Slade said during his set. Slade has a point as he was relentlessly treated badly by Tamra and Vicki. Gretchen has a point too as she is trying to make amends with the ladies. But Gretchen should have known, that the women, she is now trying to befriend hurt the man she claims to love. Slade’s response is to lash out via comedy, which is not mature. But the person he should be taking his frustration out is Gretchen, not Vicki or Tamra.

What were your thoughts?

Next Week:
Tamra and Vicki fume when they discover they were the subjects of Slade’s insulting comedy-routine jokes. Meanwhile, Vicki worries about her daughter’s looming surgery; Alexis frets about her nose surgery; and Tamra hosts a party with a 1980s theme. Yes the one where Vicki’s screams her eyeballs out.

More in Real Housewives Of Orange County (277 of 364 articles)