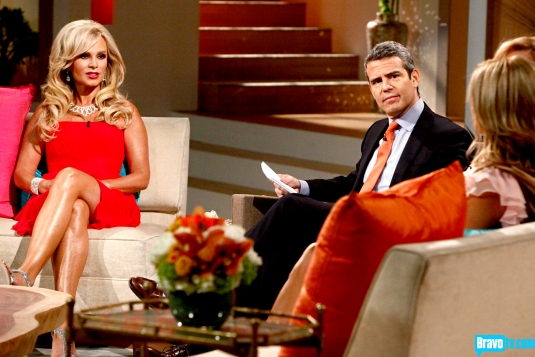 coat at the name changing ceremony. They were all wearing heavy artillery it was 50° that night which in the OC is like an artic blast. Why not ask all the other ladies why there were wearing coats too? Vicki made a big deal about the coat because jobless, penniless, deadbeat and the has got to be wicked in bed, Brooks Ayers ‘bought’ it for her. Andy didn’t even ask about that, which I am sure will be covered in part 2.

Andy starts on Alexis and her inability to articulate 2 sentences together – She now knows that Costa Rica is in Central America and not Mexico and Katie Couric’s last name is not pronounced ‘Kerick’. Alexis’s dumb blonde schtick upsets the ladies immensely, they don’t think she is journalist material and she is being handcuffed in the basement on a daily basis by her caveman husband. They don’t like the fact that she consults or get’s permission from her husband for certain decisions. Alexis never had a problem with her husband or his way of handling her until she appeared on the show, being counseled by multiple divorcees know-it-alls. Heather thinks this is sad as Jim has 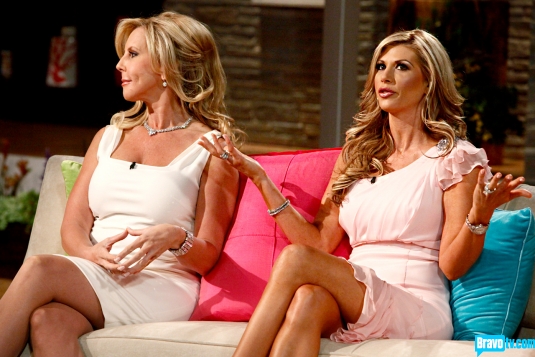 ‘power’ over Alexis. Why this is a problem to Heather and Tamra is beyond me.

Heather is irritated as Alexis lambasted her career, stating she wasn’t an actress. Gretchen lambasted you too, Mrs Dubrow. Alexis defends herself and states she was trying to be funny, which of course fell flat. No one finds Alexis funny, only the popular girls are funny. When will Alexis learn this? Alexis states there have been many times Heather has spoken not too favorably about Alexis; Gretchen and Tammy disagree, when did this happen? Have these ladies watched this season? True or not, Heather has spoken on multiple occasions about Alexis and that is her right. Just own it. Alexis said she didn’t call Heather pretentious but stuffy, Alexis doesn’t think stuffy is as bad as pretentious.

Bravo dictionary: Andy said pretension instead of pretentious. Not the same meaning. 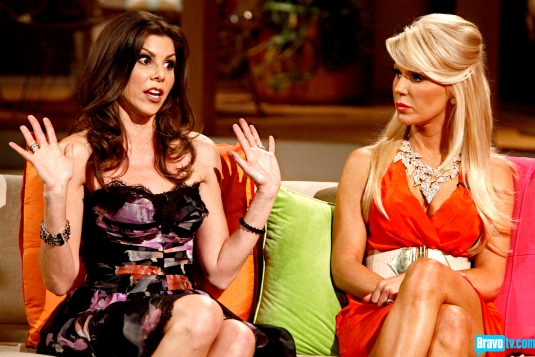 Alexis and Heather continue with the painful boring banter.

Now onto Tamra, Andy asks how the children feel about her engagement to Eddie. Tamra’s answer, Eddie proposed again at dinner in front of the kids. That’s it? So we shall assume the children are all, over the moon at a soon to be step dad.  Simon off course didn’t react well and I am sure was a raging bull – he having a girlfriend for over a year that he is living with, is upset at Tamra moving because she is moving on. Tamra’s fitness studio should be opening in 2-3 months. Seriously, congrats Tamra, good job, opening and running a business is hard work. Tamra and Gretchen’s road to friendship is shown, awww. How lovely. Tamra has matured and states it was time to work and be mature. True.

Vicki is jealous of Gretchen and Tamra’s friendship. Period. If Tamra was 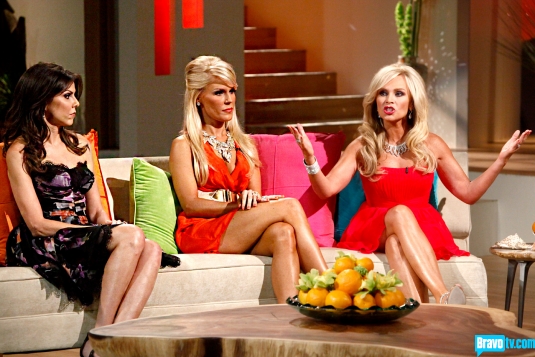 not friends with Gretchen she would still be friends with Vicki. The problem being Brooks. Who when a friend is head over heels in love with a dead-beat dad who is not supporting his children, a friend will of course voice an opinion. Vicki doesn’t like that, everyone should like a person who is two times worse than Slade, if we are keeping count. Slade currently has a job and has never been in prison for non payment.

Heather made a great point, when you are working on a friendship you are willing to overlook certain things. That is true for all of them.

A fans asks Vicki ‘Does God like Vicki having sex with someone else, while she is married?’ Vicki answers that Donn is also having sex. Does Vicki read the Bible? For the record, adultery is a sin, no matter who is doing it. You don’t get forgiven upon entry into ‘heaven’, you have to ask for forgiveness when you sin. Vicki is the best hypocrite out there, she didn’t want her daughter having pre-marital sex. But not only is she committing adultery she is having pre-marital sex too. Bible study over.

Vicki doesn’t grasp that the ladies want her to be happy, they just have issues with her, just like she did and voiced and screamed her opinion on the past 6 seasons of The Real Housewives Of Orange County. Gretchen and Vicki’s back and forth is giving me a headache.

Why did they keep the scene where the bird flew into Andy’s head and yet, we still haven’t seen the footage from Scary Island?

The ladies observations about Alexis being materialistic are probably true, but I find it interesting that they find so much 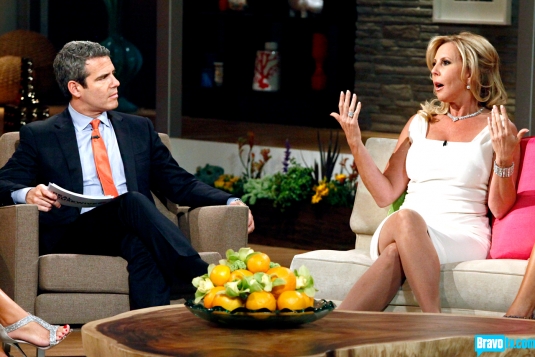 footage to belittle Alexis and everyone else is perfect. Tamra’s response for why she was cruel to Alexis at lunch, “she asked to meet me, it went on for 45 mins”, all valid points as to why Tamra, should act like a shrew. Alexis shouldn’t be on reality TV, she cannot articulate at all well. I feel sorry for her. Alexis obviously not handling the heat in the kitchen, begins to spew what she thinks can save her. Gretchen lied about wearing extensions and getting her lips done. Not a big whoop, but lies none the less. Why would Gretchen lie about that, she has been asked multiple times about it. Gretchen didn’t want to say she had plastic surgery on camera. Gretch you are on a reality show, when you create enemies all that is in the dark, will come to light. That bleaching process must wreak havoc on her hair, I thought her hair was her own. O well. Must everyone do fillers and botox, you all look fine without the botch jobs.

The gang up on Alexis, wasn’t pretty. Heather now tells us Alexis treats the camera crew like crap and the Nordstrom staff cannot stand her as there is a facebook page to back it up. Tamra, states that this experience at Nordstrom has happened 10 times, “the staff state that Alexis is horrible”.

Alexis: If everyone says you’re dead, it’s time to lie down… I think she meant lay

On Monday, Brooks and Brianna sit on the couch.

More in Real Housewives Of Orange County (260 of 364 articles)