Alexis; is meeting with an event planner to plan a birthday party for her twin girls. The theme for this party is “Puppy Princess”. Will I have flash backs to Taylors $60,000 party? Alexi and Jim’s twins are turning four. While all the work for the party is going on, Alexis is doing what every Mom does, getting an at home spray tan. 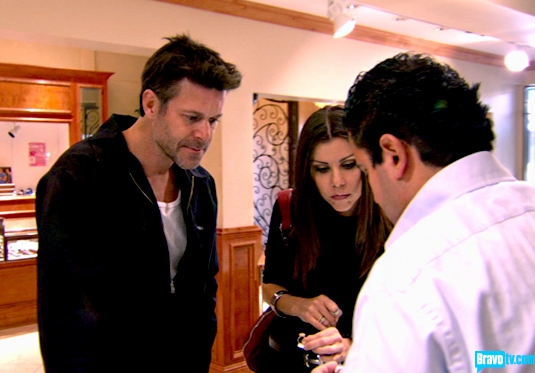 ring doesn’t mean that they have to get married tomorrow. Slade wants to get Gretchen the ring to show that he is committed and wants to spend the rest of his life with her. After looking at several rings Slade asks the jeweler if they could put in a fake stone in a ring. I could hear the Bravo family across America gasping at this. However, my thought was this is pretty darn brave of him to say it to the jeweler and in front of Heather and most importantly in front of the viewing audience. Heather gives Slade some great advice by telling him that Gretchen loves him and that he should get some sort of band that will show his commitment. Heather comes through with the good advice once again. Slade says that he will go and think about it and put some money together and then come back.

Tamra; is at Dr. Dubrow’s office to have the tattoo removed from her ring finger. You know the one, the “Simon” she had tattooed on her ring finger when she knew that the marriage was over. Tamra tells Dr. Dubrow that Eddie told her if she had the tattoo removed that he would put a ring on it. Tamra keeps running to the bathroom as she is extremely nervous about this procedure. Don’t you all just love Dr. Dubrow? I sure do, he is smart, good looking, funny and a plastic surgeon. ‘All the right stuff’. Dr. Dubrow cuts out the skin with the tattoo on it. That is going to hurt while it heals. Good luck with that, at least it will be the pain that Simon can cause Tamra.

Vicki: Billy, Vicki’s brother is at her house still visiting from the Briana’s wedding announcement. The conversation is all about Briana and Ryan. Billy is concerned that Briana and Ryan have jumped into this marriage too fast. Vicki is so against this marriage and is saying everything is wrong about it. They didn’t go to premarital counseling, what is their stand on money, religion, and the fact that they haven’t spent a lot of time together. Let me tell you, I had the big wedding and that marriage didn’t last. Then I found the love of my life and we eloped in England and we couldn’t be more happy or committed to each other. On the other hand, Vicki is right that it is every mother’s dream to help plan their daughter’s wedding. Briana would like to have a formal wedding and Billy asks Vicki that if it takes place would she include Brooks? Vicki says, yes he would be involved. Billy tells Vicki that you “have to support her or lose her and embrace Ryan” Getting back to how Vicki feels about Brooks and she tells Billy “Don let me go and another man picked me up”. 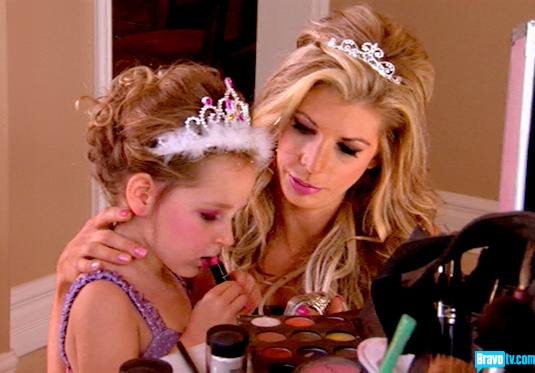 Alexis: It’s Puppy Princess party day at the Bellino’s and she tells us that this day is all about friends, family and her beautiful daughters. Alexis explains that her children want a puppy but she is not ready to clean up the “poop” so she is having a shelter bring in puppies to play with for the day and maybe someone will be able to go home with a puppy. I would have never thought of something like that. My guess is that it is a charity tie in and helps with the expenses of the party. Pretty good idea though.

Heather: Gretchen goes for a visit at Heather’s house as she has never been there before and has heard so much about it. Heather takes Gretchen to the sitting area in her master bathroom. Gretchen looks very uncomfortable in this high end setting. Gretchen explains her relationship with Slade to Heather. Once again, Gretchen is being very smart in saying that she loves Slade but that she doesn’t want to take on his old and bad debts. Heather explains that Gretchen is not 22 anymore and should be making good life choices. Heather comes right out and asks if they have talked about marriage. Heather tells Gretchen that Slade is on a different page. A different page being that he is ready for a commitment and ready to move to the next level. Gretchen gets emotional thinking that if Slade wasn’t with her she would be very sad. Hitting the three year mark in any relationship is a good sign that it will be going to the next level of commitment and this is where Slade is in his thinking. Gretchen does tell Heather that she would like to have babies. Does she tell Heather though that there is one problem with that, Slade has had a vasectomy? Gretchen’s first marriage came down to financial issues and she doesn’t want to get into that again. Once again Heather shows how she is a smart woman by talking to Gretchen to see where she stands, yet doesn’t give it away about her meeting with Slade. 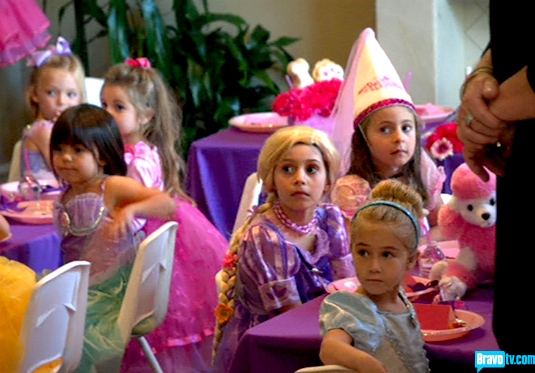 Alexis: The Puppy Princess party is about to begin and right out of the gate a puppy pees on the floor and then the rented princess’ arrive. There is such pomp and circumstance as guests begin to arrive. There even is a butler on bended knee serving the little ones juice drinks. This has to be for the cameras, do people really throw parties like this for four year olds? Alexis gives a welcome speech and it turns into how Alexis almost died after giving birth to the twins. The camera rolls around the room to most parents rolling their eyes. Had a good chuckle over that. Alexis gives the take a puppy home pitch and then cake. The last surprise is a Cinderella horse and carriage ride for the girls and Jim around the block.

Heather; is driving to pick up her son at football practice and has her husband on the phone and they talk about their day. Terry took off Tamra’s tattoo and Heather didn’t get the part for the TV movie she was up for. She goes on to tell Terry that it’s ok and all the reasons why, such as she is married and a mother. It’s almost as if she is talking herself out of the emotional toll of not getting it. Terry is such a good husband and supports her all the time.

Alexis: Back at the Puppy Princess Party and Alexis is holding onto a little baby and is begging Jim at this point for another baby. She promises that she will never ask for another thing if she can “grow” another baby. Wasn’t it just in the last episode or two that she was done being a stay at home Mom? Bet she gets a ton of tweets about those comments.

Tamra: Tamra and Eddie are having a dinner alone and get to discuss a few things going on in their lives. Tamra discusses how she is meeting with her real estate friend to look 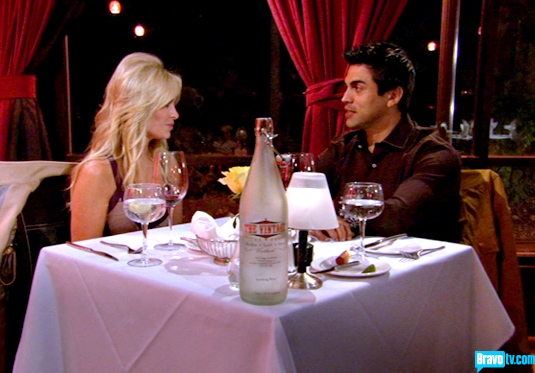 at places for the new fitness center. Eddie suggests that Tamra bring the kids over to Eddie’s for a sleep over so that they can all spend more time together. Tamra says that she doesn’t live there so it may not be a good thing. Tamra is afraid that if she brings the kids over and they are around all the time that he won’t stick around. Tamra is really emotional with Eddie and she says it right; she “is afraid that the kids will ruin this relationship.” She also says that Eddie can get a younger girl with no kids or an exotic girl. She is five years older than he is and has four kids. Eddie loves Tamra and tells her all the reasons he loves her. Eddie then brings up the Simon tattoo on Tamra’s hand and she eggs him on a little bit and asks “would you put a ring on it if it was gone?” Tamra asks why it bothers him so much. Eddie’s response is a very honest one;” you don’t want to see another man’s name on your girls hand”. He also tells her he “would put a ring on it”. Tamra shows Eddie her hand and you can see where Terry took off the skin and stitched it up to grow back. Eddie is happily shocked. Tamra tells Eddie that she had the tattoo removed for herself.

Vicki; meets with Briana at her apartment and they get right into it. Vicki feels like there is a wall up between 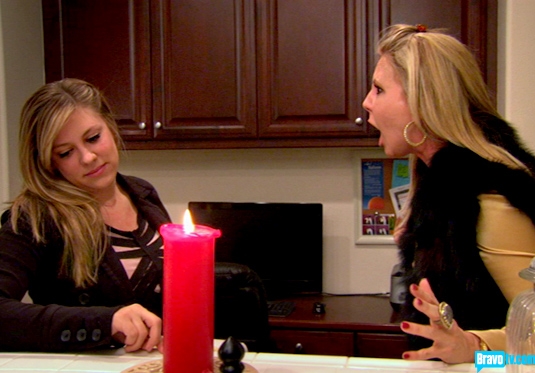 them. At this point I have to just sit and watch this argument play out as both of these women have issues and both are right and wrong. Here is the overview of how I saw it play out between Vicki and Briana. First Briana’s side is that she feels Brooks is taking advantage of Vicki. Taking advantage not only of her emotionally, but financially as well; he stays at her house and drives her car. Briana feels that with Brook’s background that he is not good for Vicki. We have another man who owed back child support here. Briana also makes it clear to Vicki that she knows the two of them were having an emotional relationship long before the divorce was filed with Don. Briana knows that is a form of cheating and I have to say I agree with her. Vicki’s point is that Ryan and Briana don’t really know each other and that it was just too fast for them to get married. Briana comes back with that they have known each other for a couple of years and she told Vicki about him many times. Vicki comes back with she didn’t know that Briana was in love with him. Wasn’t it through Face Book that Vicki found out that Briana “was in a relationship?” The bottom line here is that they both have made some huge changes in their lives recently and neither of them was up front with the other. Not sure on the reasoning of this as we don’t follow their every move but there is more to this story than they are letting on.

Briana you did what you felt was right for you at the time and I wish you and Ryan a long, happy and blessed marriage. Vicki, I hope that you get your love tank filled and not broken. Time will tell and hopefully we shall see.

More in Real Housewives Of Orange County (262 of 361 articles)