Slade and Gretchen are coming back from the comedy club debacle and they are discussing what happened. What happened was that Slade says that he wants to change careers, again. Gretchen says “where does this come from”. She just wants him to focus on something that she can “support” him on. Gretchen was hurt as she is trying to make amends with the “girls”, and she really didn’t like being blindsided by Slade’s comedy, if you can call it comedy. It is very apparent that Slade is still hurt and harboring extremely bad feelings for Vicki and Tamra. He used the stage to turn the tables around using very bad comedy to get his feelings out. Using terms like “doing the news” and “it’s all out there in the news and internet” was a lame excuse. Slade was right though, in that it is all public info he talked about and the women have been nothing but overly mean to him over the years. Maybe justifiably so, but none the less, what goes around comes around. Karma, folks, karma.

Tamra and Heather at lunch discussing the comedy night and this is where we really are starting to see that Tamra has really grown up over the seasons. When you watch a 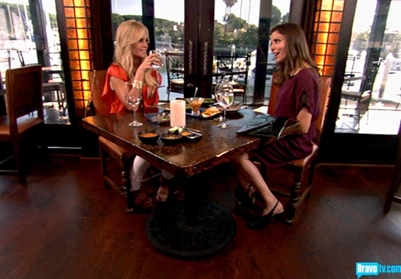 marriage destruct before your eyes, you see the good, bad, and ugly in people. When you are unhappy, you want to make everyone else around you unhappy. Even, if it is subconsciously. It really is nice to see that Tamra is emerging a better person. Although, I still don’t think I would trust her past my nose. Going to the next level with Eddie, moving in, but she is being adult about it, “doing it the right way.” She talks about being married twice and the children and you get the feeling that she is thinking this through this time. We start hearing about the “80’s” party here. I got a big chuckle out of Tamra when she said that “Alexis is kind of a ding dong.” Tamra and Heather discuss Alexis for a few more minutes and surely it will be hurtful for Alexis to hear down the road but thought it was pretty funny that Heather says that Alexis is a news anchor, but she does style pieces. The best part is when Tamra goes on to say that “my 12 year old is smarter than Alexis” Yeah she went there.

When Heather told Tamara about Slade calling her “a Michelin man” she handled it really well. Good job Tamara; you can call me fat all day long, just don’t be a dead beat dad and not pay your child support. Why do I get the feeling over and over again that there is more to Tamra and Slade’s hate for each other. Heather is right, if you can get Slade to come around then he will shut it down. Brilliant Heather, you do have a head on your shoulder. “Make Slade feel comfortable” she tells Tamra and it will shut him down. And all will be better. Tamra ends with “I’ve tried everything else why not kill him with kindness.” 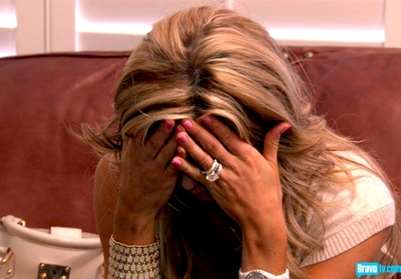 Alexis goes for a consult with her plastic surgeon and I get really irritated here as she has a nervous breakdown about having her nose and deviated septum corrected. Oh please Alexis, what are you really crying about, being genuinely afraid of the procedure or disfiguring your face? Alexis I do not know you, but I have had so many surgeries including cataract to both eyes and heart surgery, so just enjoy the drugs for the hour or so that they put you out and be on your way. On your way, to looking better without the lump on your nose. By the way saw you on Watch What Happens Live and your nose does look great.

Alexis meets with Gretchen after the “consult” and they get into how the Comedy show was a pretty scary thing. Gretchen tells Alexis just how mad she was at Slade for the bad comedy. And tells Alexis how that Slade is just looking for an apology from Vicki and Tamra. And, he should get one from Vicki and Tamra, but he never will. Gretchen still states that she “doesn’t want to be in the middle”. I’ve said it before, I’ll say it again, would love to really know what is going on between Vicki, Tamra and Slade. Maybe this reunion we will finally get some answers to this pressing question. Oh there I go day dreaming again.

We see Vicki at her office all frazzled and believe you me; she wants us viewers to see this. Vicki is known for being the “ultimate business woman” and it is my feeling that she wants us to see the vulnerable side to her this season. I have always been one to stick up for her in past seasons, but somehow this season, I’m not getting it. Even the Ultimate Business Woman can’t get a grip that her document is printing out of the fax machine. Vicki for sure is not focused today, as she fesses up to all the stress she is going through. The stress of her daughter Brianna being sick is justified and we are all worried with her. The stresses of the divorce, having gone through one before I understand that. But where I get off the “loving” Vicki page is that she is stressed out over the thought that she could end up paying Don Spousal Support. Really? Haven’t you been on television for seven seasons talking up every moment your business and how good it is? Vicki chalk it up to being such a great business woman that you probably have 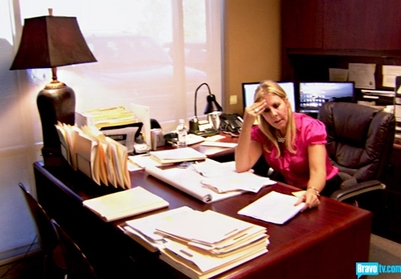 made much more than Don and as you have shown to us all that he is the one that helped raise your children and stood behind you all the while you were becoming the “Ultimate Business Woman.”

As we enter into Gretchen and Slade’s bed room we get to see Slade’s business side. They have a lengthy discussion about an offer coming Gretchen’s way. Doing the Pussy Cat Dolls show in Vegas. This conversation really shows just how good a businessman or salesman that Slade is. He lets Gretchen talk it through and makes her feel like it is her decision to do the Pussy Cat Dolls show. Slade already committed her to do the show. Gretchen ends with “I never said he wasn’t smart”.

Now Gretchen and all the women are getting ready for the big “80’s” Party. Tamra calls Gretchen and they discuss yet again the comedy show mess. Again Tamra gets right to the point and Gretchen says she is sorry that issues came up, and that Tamra and Slade should work out their differences. Tamra doesn’t let us down with the “I’ll kick him in the balls” comment. Tamra goes to Vicki’s house to check in on Brianna and finds out that Brianna is sick. 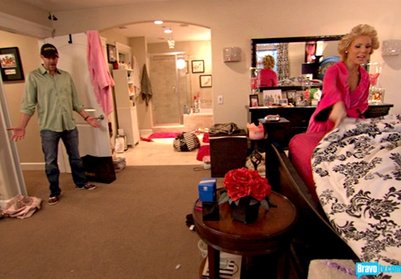 With Brianna being sick, it makes us all feel sad. Here we go Slade drama. Vicki says “I don’t know what good could come from hurting people”. Vicki, take Tamra’s advice and don’t worry about Slade just take care of your family issues.

Let’s get right to the heart of this episode, maybe the meat of the season, let the party begin!

And it begins – Alexis and Gretchen in the limo is priceless, they discuss how Tamra was easy on Gretchen and have to agree Alexis on this one, be careful of Tamra and her new found love of Gretchen.

Heather always the classy lady comes as a Palmer Girl, and Tamra letting us all know that she “was bushy” in the 80’s to prevent camel toe. Yes, she went there AGAIN. All the women had fun with getting into the 80’s look. Brought back my leg warmer days. Thought that leg warmers were the bomb!

Never got the Bunko, Bunco dice rolling game, but upon looking it up, it is a drinking game played by women at parties to loosen up. Ok, that is why I don’t know it. Alexis the “holy roller” wins a prize and low and behold she gets “nipple nibblers” and proceeds to put it on like lip gloss. Oh Vicki, you don’t like to talk about any “parts that are supposed to be covered up”. Somehow I don’t think you are that much of a prude.

Tamra’s trainer tells Vicki what Slade said at the Comedy Club and Gretchen wants to know why Rickie is starting “shit”. Rickie is just trying to get the crowd fired up and fired up he does get them. It is also apparent that he is trying to get Gretchen in trouble with Vicki. As usual, Gretchen says that she didn’t talk about Vicki and Heather sticks up for her as she was there. Heather tries to lighten it by saying that it was done in poor taste, and if he made fun all the way around would not have been so bad. Vicki doesn’t understand how Tamra can be so team Gretchen. Honestly I don’t see it either, but it sure is making for some good TV and great conversation.

[FrontpageSlideshow fs_cats=1251 fs_slides=36 fs_show_prevnext_buttons=1 fs_main_width=400px fs_main_height=270px fs_slide_width=400px fs_text_opacity=1% fs_rounded=0]
One last surprise, and in walk the men. I am still intrigued by Dr. Dubrow, and hope we get to see more of him during the rest of the season. Eddie is enjoying life and it shows, and Slade, oh Slade, you looked very typical 80’s in your “mullet”. Vicki goes onto say that Tamra is showing no “loyalty” towards her by inviting Slade to this party.

And, next time, the fight gets into full gear. I am looking forward to this.

More in Real Housewives Of Orange County (275 of 364 articles)