The Party’s Over
So the men turn up and Vicki is not happy to see Slade with his mullet, yeahhh! Brooks didn’t turn up and Jim wasn’t invited. Gretchen tells Slade what just occurred. Was Vicki not aware that Gretchen and Slade are still dating and happy? 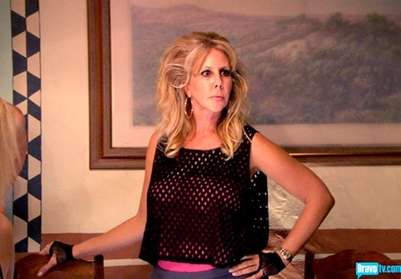 If Slade is not significant, why didn’t Vicki just ignore him. She states she is going to see her daughter as she is important right now, not Slade. If Briana was so important, what was Vicki doing at the Bunco part anyway? She leaves and sits outside, gathering her thoughts.

Vicki comes back inside. She states that what Slade said is hurtful and mean, because he mentioned her looks. Vicki states that as a mother it is hurtful as he isn’t paying his child support. Is Vicki the grandmother to Slade’s children? What I don’t understand is why Vicki is so invested in Slade and Michelle’s [The children’s mother] business. She also mentioned, that Slade isn’t working and not paying his bills. Again, if that is the case, what does it matter to Vicki? 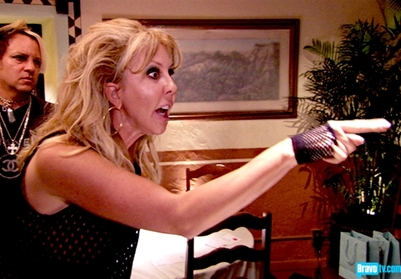 [Screaming] Vicki: YOU’RE NOT A MOTHER YOU HAVE NO IDEA WHAT IT MEANS

Can Vicki stop screaming, my head hurts. Then Vicki said that Brooks was behind but he is caught up. Does she know Slade’s finances? Tammy said she would never have invited Slade if he would have upset Vicki so much. Vicki should just leave the show then. Vicki’s issue is that her physical being was attacked. But it is ok to call someone a dead beat dad. Gretchen mentions that Brooks was imprisoned for not paying child support. Vicki it’s none of your business. Neither is Slade, your business, Vicki. Vicki then rants that Slade is not working and living off Gretchen. Again what business is it of Vicki’s if that’s what Gretchen wants then so be it! What else went on between Slade and Vicki, her disdain for him is ridiculous, uncalled for and has never been any of her business.

Vicki states she doesn’t support men who don’t pay child support. How is she supporting Slade? By being in the same room as him? Heather states she is perturbed because of the women’s behavior, especially as it’s a school night. Ok Heather. The Real Housewives of Orange County which you claim to never have watched [Do your homework] before joining an international television show.

Tamra: You can’t argue with stupid.

Tamra starts a conversation about plastic surgery, then converses about “sinus surgery”. Gretchen mentions “Lex” is having sinus surgery. Terry states the sinus isn’t in the nose but high up in the cheeks. Tamra and Terry high five and Tamra cackles. Alexis is obviously upset as she knew Tamra was referring to her. Tamra then stated that Alexis’ nose was big and needed work.

Vicki and Tamra, where is the high road? 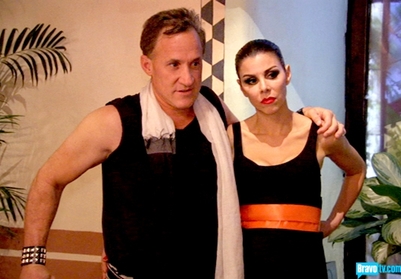 Alexis couldn’t let it go and was upset that Gretchen never came to her defense. Outside, Alexis is upset as Gretchen never had her back. Alexis just look nice and try and be quiet. Inside. Terry and Heather show us how intelligent and smart they are, we won’t use the big words, especially on a school night.

Brianna visits Donn she recognizes that he was the only father that raised her. They are trying to cultivate an adult father/daughter relationship. She explain the surgery procedures. The scene between the two of them was the best that Orange County has had to offer so far.

Vicki later defends her outburst to Tamra and will apologize to Gretchen, I will handle her. But she also expects an apology from Gretchen. Of course Vicki doesn’t mention she needs to apologize to Slade. Vicki then states that Gretchen is condoning the fact that Slade isn’t working, she doesn’t condone men that don’t support their children.

Let’s look at what the words support and condone mean…

Support:
a. To aid the cause, policy, or interests of: supported her in her election campaign.
b. To argue in favor of; advocate: supported lower taxes.
1. To endure; tolerate: “At supper there was such a conflux of company that I could scarcely support the tumult” (Samuel Johnson).
2. To act in a secondary or subordinate role to (a leading performer).

Condone:
1. to overlook or forgive (an offense)
2. (Law) Law (esp of a spouse) to pardon or overlook (an offense, usually adultery)

So in actuality you are supporting Slade as you are on A REALITY SHOW WHICH HE HAS AIRTIME ON! Whoo hoo. And the ladies are condoning you as they have overlooked your adultery. Vicki unless Gretchen has told you, Slade will NOT get a job, you do not have a foot to stand on. Tamra looks lost, listening to Vicki’s explanation. Vicki made the biggest lying statement in all 7 seasons. I never yell like that. In what universe Vicki?

At the Bellino’s the doorbell rings and Alexis asks is that the doorbell? What sound does your doorbell usually make, Alexis? She goes to the door and it’s some of the clothes she “designed”, not that there is anything wrong with the 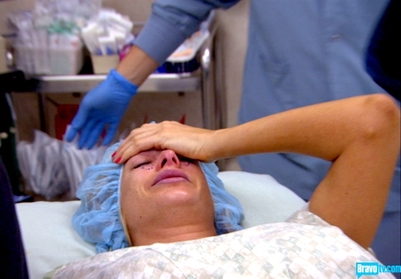 stores, but they look like they are from Marshalls or Ross.

Alexis is crying before her rhinoplasty, she is scared of the fact that her face will be cut open, did she cry before her breast augmentations, as her chest was cut open?

Brianna is facing possible cancer and is calm as ever, Alexis is ready to pass out before she even receives anesthetic and of course this is all about Vicki.

Briana: Nothing is ever about me or anybody else when it comes to my mom, it always ends up being about her

Yes it’s Vicki’s world and we live to please her.

Vicki: Talk to me when you have a child and say you’re not going to worry.

I do understand Vicki, but you’re worrying about the person who is ACTUALLY going under the knife. Imagine what the hell she is going through, and forget about your self for a moment. Then Vicki starts with the western medicine jargon, did mystical buddhist doctors or did Aang The Last Airbender, perform Vicki’s plastic surgeries? Vicki please let your daughter have her moment.

Next week
Under The Knife: A jittery Alexis goes under the knife for sinus surgery. The medical theme continues with Briana’s thyroid surgery and Tamra’s decision to have her breast implants removed. Meanwhile, Heather investigates the logistics of opening a restaurant; and Gretchen prepares for her Las Vegas debut in a Pussycat Dolls show.

More in Real Housewives Of Orange County (272 of 364 articles)