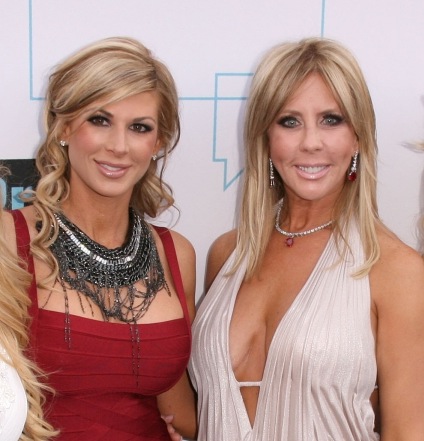 Say it ain’t so! Vicki Gunvalson and Alexis have been fired?!

Bravo is looking to ax cast members from “The Real Housewives of Orange County” to bring in some fresh and wealthy talent. Sources told us Bravo execs are looking to refresh the cast the same way that it revamped the cast of its New York City franchise this season, adding three new women. An e-mail sent last week from “Housewives of Orange County” producers Evolution Media said it was looking for “fabulous affluent women and their families who live in amazing homes to potentially be on this series.” Once source told us Bravo is looking to dump at least one regular on the program, and said cast mates Vicki Gunvalson and Alexis Bellino were the most vulnerable, adding that Bellino is out of favor with producers after leaving filming in Costa Rica early during the last season. Sources also said that producers had considered asking Gunvalson’s pregnant 24-year-old daughter Brianna Wolfsmith to join the cast, given that she eloped with her boyfriend last year and is already known to Orange County viewers. Bravo had no comment.

If this is true, Bravo is as bad as VH1, keeping the circus acts and keeping the ringleading trouble makers. Make that money Bravo with the low rated Orange County “allstars”. Dear Bravo please bring Briana as a full time paid cast member. She’s a wife!

More in Real Housewives Of Orange County (259 of 364 articles)