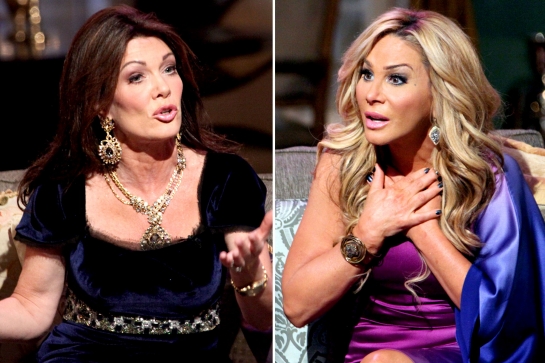 As season 3 of the Real Housewives Of Beverly Hills, gears up to air in a few weeks. The rumors, gossip and stories have started to flow, full force. The beloved Brit, Lisa Vanderpump a friend to everyone, is now on shaky terms with her former partner in crime, Brandi Glanville and now Kyle Richards, but allegedly the real reason she and Adrienne Maloof fell out was over a bad business deal. According to a source:

“Lisa and Adrienne were investing in business deals together and they didn’t go well. There was a lot of money involved and everyone ended up losing money and Adrienne and Paul were furious. They felt like they hadn’t been told the truth by Lisa and that is when the tension started. he fights about Adrienne’s kids was a serious problem for her but the real issues were over money. Money is always a problem and when the business deals all started falling apart so did the friendship.”

Lisa and Adrienne allegedly had quite few nasty fights on and off camera about Adrienne’s children and her subsequent separation and divorce from Paul Nassif, but the source said all of the bad feelings started from soured business deals.

As Adrienne quit the show, the two have zero interaction, but the source said the bad feelings will never go away. It’s interesting to note that celebrity net worth claims that Lisa is in fact worth more than Adrienne at $65 million versus Adrienne’s $50 million. Both ladies were accused in different seasons of only owning a small portion of their main money makers, Adrienne, 2% of the Palms hotel in Las Vegas, and Maloof Productions, Maloof Music and the annual Maloof Money Cup with her brothers, and Lisa, Villa Blanca in Beverly Hills and have owned 26 restaurants, bars and clubs in London and Los Angeles, including The Shadow Lounge, Bar Soho and Sur. What are your thoughts? Post your comments below.

More in Real Housewives Of Beverly Hills (474 of 794 articles)