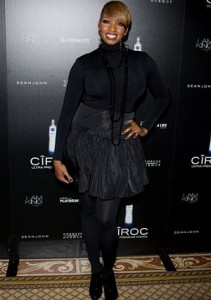 After months of rumors of their impending break-up, “Real Housewives of Atlanta’s” NeNe Leakes and her husband Gregg aired out their grievances in front of the cameras. And it wasn’t pretty. Their forceful words had NeNe in tears and left audiences wondering, “Is this the end?”

Now, NeNe is speaking out on her deteriorating marriage. The ever-candid Leakes sat down with ESSENCE.com and wasn’t afraid to speak her mind on the divorce and whether she’s strong enough to move on without Gregg, whom she refers to as her “rock.

ESSENCE.com: On this week’s episode you and Gregg had an emotional argument. What was it like for you to have to relive those moments?
LEAKES: Well, it happened a few months ago so it wasn’t as impactful for me as it might have been for the viewers. The moment was a lot longer than what you guys saw and it was a really heavy scene for me. Looking at it on TV, I didn’t get anything from it because I had already lived it. I’ve been through it, I’ve lived it and I’ve moved on past it.

ESSENCE.com: There’s been so much scrutiny on your marriage lately. What has that been like?
LEAKES: One of the things I hope people are able to get is that long before that scene came out there was a lot of blogging saying I was cheating on Gregg and that Gregg was this great guy and he’s done so much for me. People were saying things like, ‘He took her out of the strip club” and stuff like that. My producers were with me when all this stuff was going down and they were trying to keep me sane.

I was having a really rough time because I wanted to speak out on that and I wanted people to understand that Gregg didn’t take me out of a strip club, let’s be very clear about that. We got together when he didn’t have a thing so I don’t know who the heck these people are out here saying this stuff because when we got together I was the breadwinner. I started a business and I brought Gregg on board and we became a couple later. And when we were able to live a comfortable life, it wasn’t because of what Gregg had done, it was because of what we had done together.

ESSENCE.com: Do you feel like you were portrayed as the cheater?
LEAKES: People would say things like, ‘Gregg is so nice,’ and it really bothered me because I’m not saying that he isn’t nice, but it was people were discrediting me as if I didn’t deserve somebody that was nice. I felt like, ‘you guys have no clue about what you’re talking about’ because in the 14 years that I’ve been with Gregg, I’ve been through a lot, and people who are close to me know that. I felt like when all the rumors hit the blogs that was the time for me to speak up but I couldn’t because I have a child and he’s 11 and he would be watching.

ESSENCE.com: When did you see the divorce lawyer?
LEAKES: You guys saw me sitting in the parking lot outside the attorney’s office which Bravo played backwards. In real life it didn’t happen that way. I filed months ago, before that audio even came out. When the audio did come out it just reassured me that I was doing the right thing. It bothered me because I had filed, but I was trying to work it out and he and I had just come back from a trip we had taken. Like two days after we came back, the audio came out.

ESSENCE.com: So you were really surprised?
LEAKES: I was really surprised and my attorney had been talking to me about being careful of the things [that] I say. So in that moment I knew that I couldn’t say anything like, ‘you don’t take care of me’ so I said, ‘Well, give me back the damn vacations.’ ‘Give me back the damn shoes, the vacations and the labor pains. This is a real relationship, and this is what I wanted people to see. I just hope I can be brave for people who can’t be and that I’m strong enough to show my child what a strong woman looks like.

ESSENCE.com: Are you scared of being on your own?
LEAKES: I am scared, but I’m taking baby steps. I’ve been with Gregg since I was 28, and I’m now 42. I thought I was a woman when I got with him, but I’m really a grown woman now. I’ve been with him for some of the best years of my life so it is scary for me to be like, ‘I’m gonna be on my own.’

ESSENCE.com: How is your relationship? Are you cordial?
LEAKES: We are cordial, and it is very much of an up and down thing. One day is good, the next day is bad. That’s what I’m really tired of. And I’m very aware that the 40s for me, are the new 30s and that I need to be happy because life is very short.

ESSENCE.com: And Gregg is someone that no longer makes you happy. That’s something that you’re certain of?
LEAKES: I’m not sure about that, and I have to think about it. My girlfriends tell me, ‘NeNe you can do this on your own.’ Gregg is my friend and he’s been that for years. He’s always been a great rock for me and I’m afraid that if we really break it off for good I won’t have that rock that I’ve always had to give me great advice.

ESSENCE.com: What do you think Gregg is going through right now?
LEAKES: He’s going through a lot because he doesn’t want a divorce. He says he’s very much in love and he wants to stay married.

ESSENCE.com: Is your 11-year-old son aware of what’s going on?
LEAKES: He does know, but I wouldn’t let him watch this week’s show. My husband and I have both talked to him on our own. He’s only 11 so he wants his mom and dad to be together.

ESSENCE.com: Have any of the other “housewives” given you advice?
LEAKES: Cynthia has been a great friend. Even though she’s never been married before, we just have more of a connection. The other girls — not so much.

RHOA: Phaedra talk about her pregnancy

RHOA: Phaedra talk about her pregnancy