Kenya tells Walter what happened with Porsha. Kenya announced, she is a business woman, a part of history and opened doors for Porsha trying to become relevant, along the lines of Obama, Clinton – Gone With The Wind. Kenya is the comedic factor this season in Atlanta.

Porsha also relays what happened with Kenya during their altercation to her husband Kordell, who is heavily invested in this stupid conversation. Why can’t the women handle their disagreements like the men – quickly and maturely.

Porsha: “Every idiot, has something who thinks that they’re smart”

Nene visits Kandi’s room (her comb-over is not looking good). Nene tells Kandi about the fight. Nene and 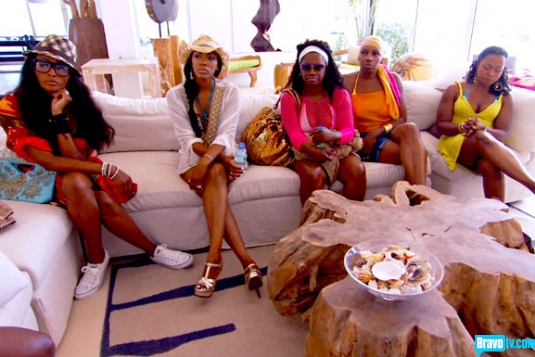 Kandi, clear the air especially after Kandi’s first season, when they famously argued.

Kenya believes she is going to get a proposal. Poor silly Kenya. Kenya apologizes to Porsha for calling her a b*tch. Porsha tries to interject and Kenya doesn’t allow that. Porsha of course takes offense and says Kenya is like a mean raisin (Porsha is channeling Kelly Bensimon from scary island – “Bethenny tried to kill me in my sleep“). Nene states Kenya’s apology wasn’t acceptable, as Nene is the authority on apologies – ask Kim and Sheree. Kenya’s attempt at a apology fell flat. Has Nene had more work done to her nose or was that makeup? Her nose looks like it’s leaning to the side.

Kenya presents Cynthia, Vanessa Williams book You Have No Idea: A Famous Daughter, Her No-nonsense Mother, and How They Survived Pageants, Hollywood, Love, Loss (and Each Other)

. Cynthia should have presented Kenya this book – He’s Just Not That Into You: The No-Excuses Truth to Understanding Guys

. Everyone separates and kisses and hugs their significant other. Kenya forces a peck on the cheek from Walter. 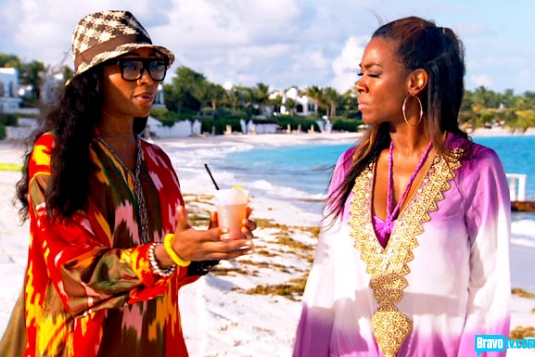 Kenya tells Cynthia about her pageant days and she reveals a judge pulled her to the side and told her she could win., if it wasn’t for her attire. Kenya doesn’t realize that her criticism to the coochie crack girl was not constructive and not in private.Kenya claims that some of the girls from the Bailey Agency audition, contacted her and thanked Kenya for her constructive criticism, meanwhile Cynthia has been contacted by more girls from that day, who were embarrassed by Kenya’s outburst. Cynthia and Kenya get a little heated, then Kenya falls on the sand like a woman possessed and the conversation turns into them laughing – Kenya is a nut.

At dinner, Kenya is looking for a proposal. Peter gives a toast the men stand up for their women. He gives a mini toast to all the couples. Then Peter puts Walter and Kenya under the bus, by putting pressure on him to propose in 3 days. Walter set that record straight, it’s not happening. If Walter was to propose it would be at a basketball game. Phaedra said, “Ohhh on the jump tram“. Everyone gives their proposal stories, Kenya is livid. She asks Phaedra how did she let Apollo know she was ready to get engaged. Kenya is so thirsty and desperate. Kenya appears to be trying to drop some heavy hints to Walter. Give it up Kenya.

Phaedra: “Only person looking for a husband is someone who ain’t never had one”

Kenya leaves the table, Walter follows. Kenya is upset as her desperation was brought up at the table. Walter doesn’t want to feel pressured in 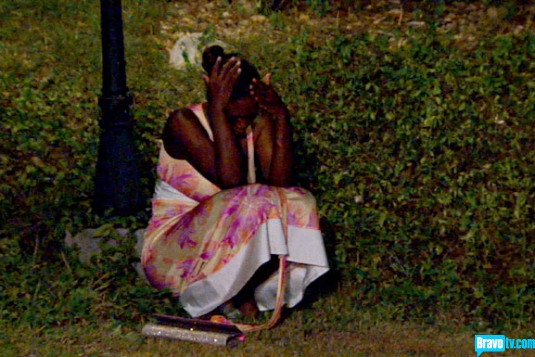 marriage. She leaves, Walter doesn’t, he asks the driver to make sure she gets home safely. Kenya goes to a dimly lit area and sits under a lamp post, she feels that Walter spoke to her disrespectfully – she cries. Phaedra goes to see if she was ok. Walter explains what they spoke about. Nene actually took up for Kenya and tells Kenya, he is leading her on. Phaedra finds Kenya crying – pitifully. Apollo arrives and they both tell Kenya to be patient.

I officially feel sorry for Kenya, she is being made a spectacle of. I hope at the reunion Andrew asks Kenya what medications she is taking. She is mentally disturbed and mentally hilarious.

Porsha Stewart ‘My Husband Kordell Stewart Is Not Gay’

Porsha Stewart ‘My Husband Kordell Stewart Is Not Gay’