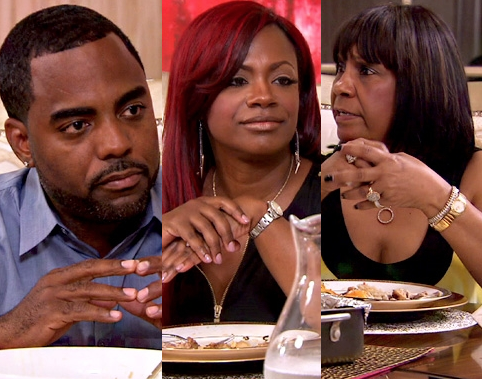 Phaedra travels out of state for her Mortuary classes, is there no other school in the state of Georgia?

Nene goes grocery shopping with her Chloe bag and heels with Cynthia. She almost passes out when she sees some Hotpockets. Has she never grocery shopped for herself before or is the snack not allowed in her home?

Is Porsha acting younger every episode? She now doesn’t want to leave her mother’s house as it’s big and her mother treats her like a ‘princess’.

Kenya has a new home, well one she’s renting anyway, it looks very nice. I was surprised to see her unpacking her boxes herself? What kind of CEO of a multi-million dollar production company does that? Doesn’t she have ‘people’? I guess the stallion booty empire has deflated or never got off the ground.

Am I the only one who thinks 14 years old is too young to date? The reason for dating is to get married, those scenes were ridiculous. We met Noelle’s ‘boyfriend’ Arthur who called Peter by his first name, no respect. Then the mothers had their chit chat. Where is Arthur’s father?

Joyce, Kandi’s mother thinks Todd is an opportunist. Joyce lives rent free in a home Kandi paid for – who’s the opportunist? What is wrong with Joyce? She’s worrying about pre-nupial agreements, the size of Kandi’s ring. She is miserable. Misery loves company. What kind of mother behaves that way, either a mad one or someone getting paid to ‘act’ the fool, that’s who. Joyce needs a zanax. If my mother behaved like that, I would respectfully pointed her towards the door & had my butler walk her out.