The episode begins with Kandi and Kenya screaming at each other from last week.

Phaedra pops out her breast and starts pumping, if Phaedra could walk around topless she would. Every given opportunity Phaedra’s breasts are on display, we don’t want to see those things. Of course the conversation then turns to sex – Mynique claims she and her husband have done ‘it’ every other day for 13 years. People who have that much sex, never brag about it in public, so she’s lying. Porsha believes if you’re not giving your husband a lot of sex weekly, and if  he then cheats, then you are partially to blame. What does Porsha eat for breakfast? Bubbles? Kenya made a good point, she has lucid moments sometimes. That if lack of sex was the reason for him cheating, you are never to blame for that. 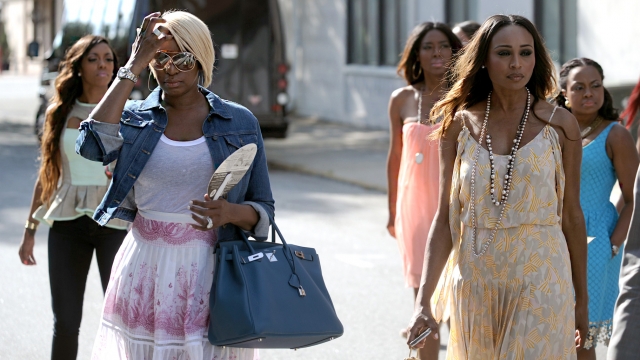 Spreading her legs is not at the top of Nene’s list. But being messy is.

Porsha starts crying, as she realizes that what the women were saying about Mynique’s marriage and versus what they were saying about her marriage are complete opposites, they respect Mynique a little more than Porsha as she was as a child to her daddy Kordell.

They arrive at the Wedding Cake mansion. It’s a lively looking home.

I don’t know what’s wrong with Kandi, may be she smelled some burger or chick-fil-a upstairs – Kenya

In response to the master bedroom fiasco, Kandi says this:

The first room I walked in I said I liked. No one knew it was the master. No one had anything to say until they kept looking & realized later that the room I picked was the best one. Even then the only person who really seemed to have a problem was Kenya. Nene told me she was cool with her room. I didn’t know they were all dogging me behind my back. & as far as them being mad about me being late….. They are ALWAYS late too! They were 3 hours late to my get together a couple days before the savannah trip. I’m not saying that being late is cool but don’t make a big deal about me when you do the same thing is all I’m saying….. #SMH #RHOA

Nene decides to talk to the ladies about some of the things she has problems with since the trip started, which she has every right to do. She mentioned everyone being late. Kandi doesn’t think anyone can tell her what to do except her mother. Dear Kandi, when you agreed to be a part of the trip, you agreed to be a part of a group traveling and there are certain expectations for the trip including, activities, being on time, participation etc, so stop your nonsense, you weak little girl. Phaedra also states she has a newborn and she has jobs. What jobs are these? Pheadra then jokes about the spelling of Mynique’s name – let’s not mention Phaedra’s name who her mother, who shall not be mentioned, named her.

Kandi and Phaedra – the smalls commiserate over the fact that everyone was late to Kandi’s dance class. The talls discuss Mynique getting ‘read’ by Phaedra. During their conversation, Kandi and Phaedra run after the Hearse Ghost Tour vehicle. Kandi running was a sight to see. 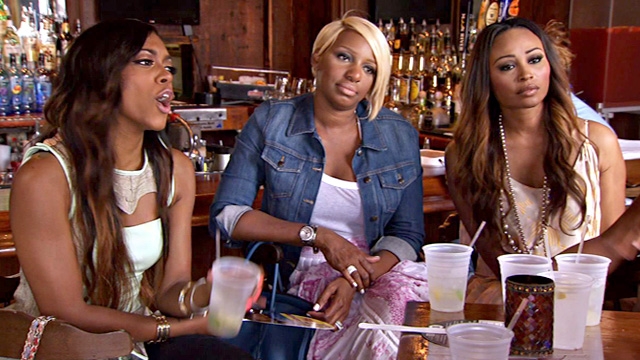 Cynthia decides to school Mynique on being ‘read’, if you’re going to be read, try to look good. Cynthia is turning into RHONY’s Kelly Bensimon with her unwanted offerings of advise on being ‘read’, gay lingo/friends. The world according to Cynthia. Is Cynthia for real? Nene explains that Mynique’s mother is white and her father is Black, she’s a ‘white girl in a black/white girl’s body. Why this was necessary I will never know. Then Nene joins in and explains that because of Mynique’s dna she doesn’t know about all the RHOA lingo, which apparently is a ‘Black’ thing? Nonsense. Kandi calls her fiance, and speaks to him through gritted teeth about the going’s on of her trip so far.

Up first is a trip to the first Black church in America – the First African Baptist Church, which was a part of the underground railroad system.

Porsha: “Being here in such a historic place really makes me feel connected to my grandfather’s legacy and how hard he fought for our civil rights” … this was the most sensible, coherent and sober statement Porsha has EVER made in her life.

The host explained the ventilation holes which indicated the underground railroad.

Porsha: “There has to be an opening for the railroad at some point, somebody’s driving the train, it’s not electric like we have now”

America stopped breathing at this point. Did this grandchild of civil rights activist, Hosea Williams, who claimed she had rocks thrown at her when she was with him, just say that? By the beard of Zeus. Jumping Jehosephat. Tammuz take the wheel! That scene was painful, more painful that what the Fashion Queens wear who have the nerve to dissect fashion choices when theirs are hideous. In defense of Porsha she is legally blonde, so that’s her story and she’s sticking to it.

They stop off for drinks and motormouth Mynique decides to blab her silly little, unhappily, married butt, about Chuck’s two week daliance with Kandi. Kandi put a stop to that, Chuck and Kandi dated for more than two weeks, even Joyce Scrooge Hitler liked him, Kandi and Chuck were not engaged so that’s probably why or may be it was the expensive gifts he bought for Joyce. Kandi explained they dated when she was 19 and then again when she was 21. Why would Mynique bring that up? Mynique then said it couldn’t have been a good two weeks as it didn’t last long. Kandi then read Mynique again stating she broke up with Chuck lol.

Kenya then pokes her nosy nose into Mynique’s embarrassed face and asks if Mynique feels weird that her new friend slept with her husband. She said no. Liar. Kandi then informed them that Phaedra dated him too. Mynique calls Kenya tacky after she asks about the sex. Mynique was tacky and stupid to bring it up in the first place. Phaedra then gives her story – she dated Chuck when they were teens and then again while she was in college and he was playing for the Atlanta Falcons. Poor Mynique she must have felt silly. 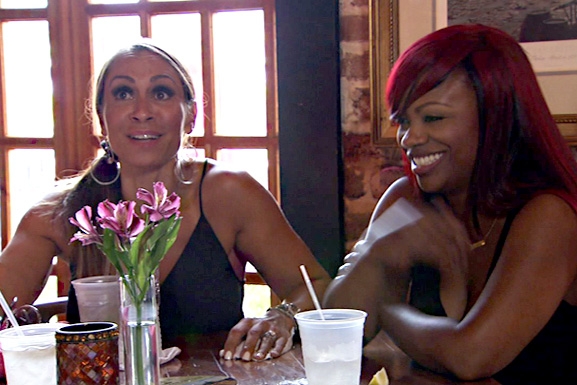 Porsha and Mynique now get into it as Porsha felt it was necessary to let Mynique know she needs to ask Chuck some questions as he hasn’t been truthful with her about his past relationships. Mynique you brought this upon yourself. Porsha apologizes. The ladies laugh. Kandi does not. What are your thoughts? Post your comments below.

Next week: Kenya and Porsha hug. This I must see.