The Real Housewives Of Atlanta cast loses all their inhibitions in an exclusive sneak peek of this Sunday night’s episode.

In a preview from Cynthia Bailey’s bachelorette party it shows Porsha Williams asking Bolo, the male stripper hired for the night, to rejoin the women and “just party.”

He agrees, but only if film stops.

Porsha, 39, tells co-star, Kandi Burruss, that Bolo is willing to come back out.

Kandi, 44, then tells producers, “Hopefully, we can get you guys to turn off the cameras for a little while so that we can actually have fun.”

“Yes,” Kenya Moore chimes in from the couch.

However, Season 13 newbie, Latoya Ali, points out that even if producers cut, there are still cameras filming the women from the ceiling, to which Kandi replies, “I don’t give a f**k about those cameras.”

“All right, let’s cut on our end,” producers can be heard saying, adding that they are also removing the cast’s mics.

Porsha then says, “Yes, I love it!” and the women say goodbye to the production staff.

“[I was] hearing all these noises: sex talk and ‘f**k me harder. She said when she thought they were finished, they started back up again,” the source said, adding that at least one other person allegedly heard them getting it on for about an hour. 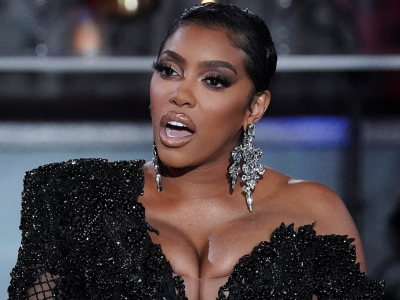 More in Real Housewives Of Atlanta (6 of 1301 articles)