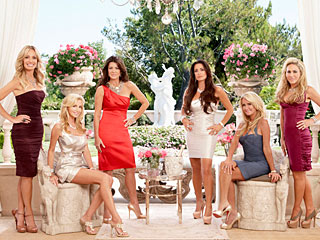 Adrienne Maloof-Nassif, 48, whose “family owns everything from the Palms to the Sacramento Kings” and “is married to Dr. Paul Nassif, a plastic surgeon who has appeared on multiple episodes of E!’s Dr. 90210,” according to E! Adrienne’s family has deep pockets. In addition to their gaming business, the Maloofs have exclusive proprietorship rights to the distribution of Coors, Miller, Corona Heineken, Tecate, Boston Beer Company, Red Bull, and Guinness products throughout New Mexico. The Maloof Companies are one of the largest single shareholders in Wells Fargo Bank.

Lisa Vanderpump-Todd, who is a former actress who now “co-owns two restaurants with her husband, Kenneth Todd, and has two children, named Pandora and Max, and an adopted son, Cedric. She appeared in Baywatch during the mid-1990’s.

Kim and Kyle Richards, who are Kathy Hilton’s younger sisters, aunts of Paris & Nicky Hilton.
Kim an actress was in Nanny and the Professor. She also starred in several Disney films, including Escape to Witch Mountain, No Deposit, No Return and Return from Witch Mountain. Richards began dating Maine entrepreneur Todd Jason Voisine in 2009.
Kyle is married to Mauricio Umansky; the couple has three daughters: Alexia, Sophia, and Portia. She also has a daughter, Farrah Aldjufrie, from her first marriage. Kyle is also an actress has appeared in several episodes of the television series Little House on the Prairie, movies: The Car, Eaten Alive and Halloween.

Camille Grammer married to actor Kelsey Grammer (Frasier, Cheers, X-Men: The Last Stand). She was a dancer on the cable television show Club MTV and appeared in Playboy in the mid-90s. Camille filed for divorce from Kelsey Grammer on July 1, 2010. She is seeking primary physical custody of the couple’s 8-year-old daughter, Mason, and 5-year-old son, Jude, in addition to child and spousal support. Kelsey cheated on Camille and his young girlfriend is pregnant.

Taylor Armstrong who at 38-years-old is the youngest of the housewives is BFF’s with fellow castmate Adrienne Maloof. Taylor is married to a Beverly Hills venture capitalist. Taylor Armstrong, is a management consultant and mother of a 4-year-old daughter, is also very involved in charity work. Armstrong runs several businesses while actively supporting philanthropic organizations.