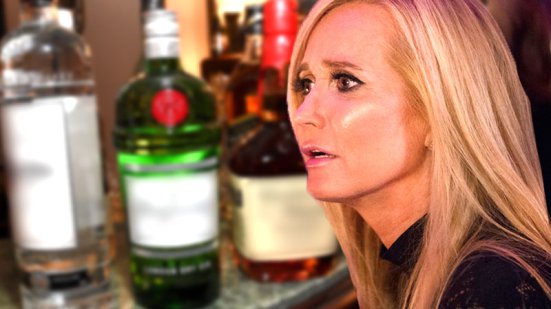 via Radar Online:
Things just got a lot more real for Real Housewives of Beverly Hills star Kim Richards! After being arrested at the Beverly Hills Hotel Polo Lounge, a source who works in production for Bravo’s hit TV show tells Radar Online.com exclusively, “Producers are going to give Kim an ultimatum – go to rehab, or else!’

According to the well-connected insider, executives at NBC Universal — the parent company of Bravo — “held an emergency meeting” Thursday afternoon after learning that the 50-year-old reality star had relapsed once again, this time getting arrested and kicking a police officer after an all-night vodka bender.

Because Richards has suffered from alcoholism in the past and has been open about her struggles on-air, the source says that this time the consequences could be especially dire.

“They called together all of the higher-ups because they needed to discuss Kim’s future involvement with the show,” the source tells Radar, adding, “She has now become a liability and she needs to get help.”

As Radar previously reported, it is not only the producers for RHOBH that are urging her to get help immediately, as Kim’s sister Kyle, whose daughter was one of the victims attacked by Kim’s pit bull Kingsley, has been pressuring her to come clean about her relapse on alcohol for quite some time now.

“Kyle has been saying that Kim needs help for months and she wasn’t shocked when she learned she got arrested. She wants their sister Kathy [Hilton] to help convince Kim to get treatment and to face her issues. She isn’t talking to Kim right now,” the source said.

More in Real Housewives Of Beverly Hills (285 of 794 articles)