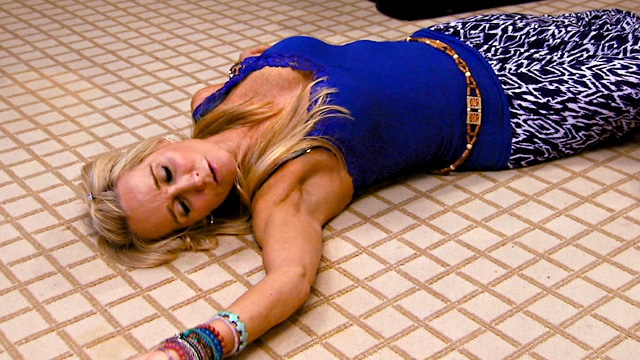 Yolanda has been struggling with Lyme Disease for quite some time now. She is finally having the surgery to remove her port and has enlisted the help of her housekeepers to make it as comfortable for her as possible. One of her employees has taken the time to fill several bottles with the master cleanse, Yolanda had asked her to do it with her for twenty days. Yolanda’s husband, David Foster is with her during her surgery and tells the camera that Lyme Disease taught him that he could be a good husband because he has failed at that a couple of times. While Yolanda is in the recovery room, having just woken up from surgery, David tells her that her daughter is feeling weak and faint. Yolanda calls her daughter and tells her to chew some almonds to regain strength. Instead of bothering Yolanda, David could have just told the girl to eat something or drink some juice! There is no need for all the dramatics.

Yolanda’s daughter wasn’t the only one feeling faint. Between running Sur, taking care of Giggy, opening a new garden bar, and performing on Dancing With the Stars, Lisa is running herself ragged. She visits a spot that she and Ken have purchased for the new garden bar and the two spend a long time talking about urinals, which they pronounce ur-EYE-nals. It’s quite funny listening to the two of them discuss. They 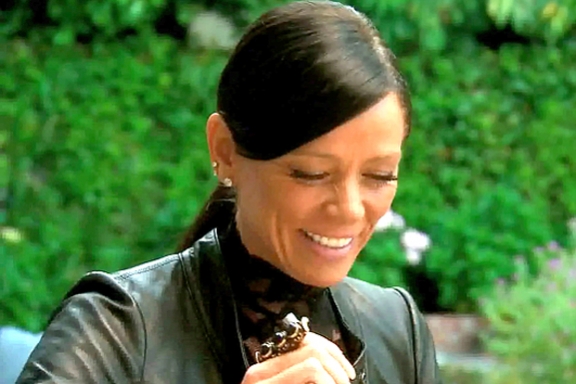 ultimately decide that despite it being marketed towards the gay community, they will have to add some female bathrooms as well. To support Lisa, Kim and Kyle get together to watch her performance in Kyle’s theater room. The two are shocked when Lisa passes out on camera during one of her filmed practices. The two are so shocked that they replay the swoon multiple times in slow motion. They poke fun at her fall by reenacting it while Kyle holds Kim hand as she falls to the ground. They believe  that Lisa faked passing out because she didn’t want to be on DWTS anymore.  It’s scary seeing Lisa crying when she comes to and motions to the camera to leave and it’s also very sad to see Kim and Kyle being so mean. Kim even remarks to the camera that “some people just aren’t cut out for fake faints.”

Kyle invites Carlton, Joyce, and a friend over for lunch at her house and when Carlton began telling her story about how a bird landed in her living room and a cat ate it, Kyle cut her off by asking if anyone wanted wine. Carlton was very much taken aback and said in her interview that it was very rude, which it was. While the foursome are enjoying lunch and drinks in the backyard, a bee swoops in and Kyle makes her friend kill it because she and Joyce are allergic. Carlton freaks out and says what a terrible thing that was to do, while remarking how they were in the bee’s home. Um, okay! Carlton, constantly shows her feelings through her eyes, and watching her rolling her eyes after the girls laugh about Kyle’s lactating breasts leaking, shows she is bored with the group.

Lisa meets for lunch with Taylor and Brandi. It’s nice to see Taylor again and her lawyer boyfriend, John Bluher. The two seem happy together (even though they are starring on VH1’s Couples Therapy this season). Kyle also shares that Taylor has been spending most of her time in Colorado now, but when she’s home they try to meet as often as they can.

Brandi has moved into her new home and though she loves it, but her parents are less than thrilled. Despite Brandi saying what a wonderful and nice mother she has, her mom is constantly putting her daughter’s house down. She comments on when Brandi will get a real dining room table. Her father can’t get over the Oscar gown she wore that exposed so much skin so he barely comments on the house at all. 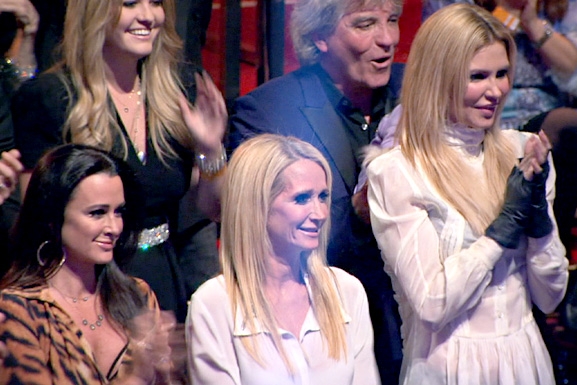 Kim’s pitbull Kingsley is in desperate need of some pet training so she opts out of Kyle’s lunch to have a trainer meet her at her house. She is on the phone with her daughter when the trainer arrives, so she makes him wait outside the door for a few minutes while she finishes up her conversation, sends a couple text messages, and then manages to unlock and open it the door. Immediately Kingsley goes after the trainer and it’s funny to see the trainer knocking Kingsley down while screaming. Isn’t your dog trainer not supposed to be so frightened? Kim’s son goes upstairs to help train the dog and Kim isn’t happy when the trainer tells her she has babied the dog too much. They now have to teach the dog to not be a baby and want its mommy, Kim, all the time. They venture outside with the dog on the leash and the trainer surprises them with a pitbull of his own. Kingsley attempts to go after the pitbull and it’s comical to watch Kim and her son kneeing the dog to get him to sit. Obviously, dog training will take quite some time. What are your thoughts? Post your comments below.

More in Real Housewives Of Beverly Hills (469 of 806 articles)