A Catered Affair To Remember 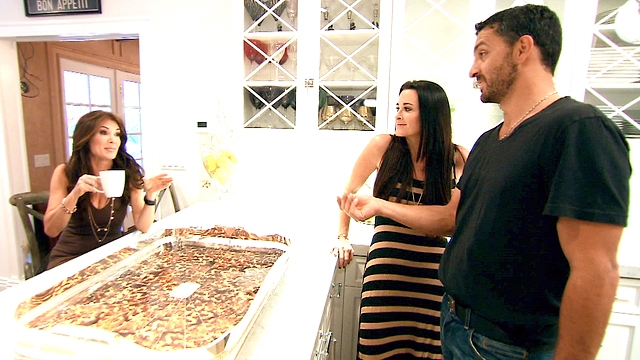 Yolanda is still the very proud mother of her gorgeous model daughter, Gigi. She recently got the cover of Santa Barbara magazine and a Guess 2013 campaign.

Brandi is looking for a home with her realtor who is also the man she is currently sleeping with. Were you really expecting Brandi to class it up this season? Brandi is messy, a drunk, rude and obscene but I like her, she’s like a broken drunken egg. Her book, Drinking and Tweeting: And Other Brandi Blunders, is doing well and of course she’s getting approximately $350,000 a season so she is no longer homeless living in a *trailer park. She decides to get the home she was looking at and goes shopping with Yolanda for furniture and decorations.

As you know Lisa appeared on Dancing With The Stars and her partner is the very heterosexual dance partner Gleb Savchenko, she wanted to be partnered with someone gay, as you know Lisa is the most un-sexual person you know. Hence the huge smile on Ken’s face all day, every day. She was voted off during week four.
Kyle is languishing in her new store, Kyle By Alene II, in which she sells luxury clothing and accessories. A Chamber Of Commerce** representative stops by the store and alludes to the fact she isn’t a member as yet, she has no idea what they are or what they do. She decides to join and host a party for some of the local businesses. She discusses with her employees about her Lisa problems. Why? They are peons not anybody important to the story line or RHOBH. Lisa finally visits Kyle they exchange small talk. Kyle has asked Lisa and the Sur staff to cater her party, for chamber of commerce. They rehash the season 3 reunion where Kyle claims that Yolanda said: “Lisa was full of sh*t”. Yolanda mulls over whether she should attend Kyle’s party, especially as she was called a liar. Lisa brings up the Mauricio cheating rumors and jokes that Mauricio hanging with his youngest daughter, Portia, is where the rumors of him being seen with a younger woman stem from. Kyle isn’t pleased. 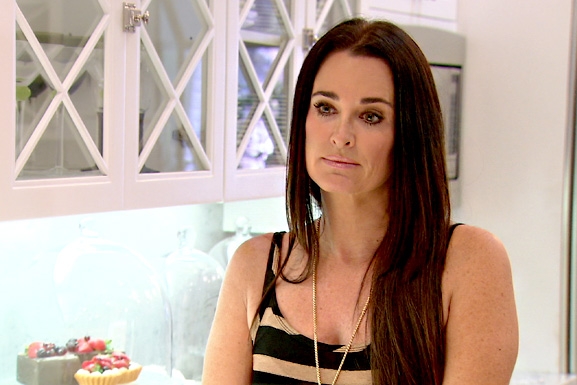 Kim’s first segment is where she is trying to make her bed with her huge dog, a Pitbull named Kingsley. Now Pitbull’s are given bad names, mostly because of their owners. They need discipline and good parenting. A Pitbull is the last breed of dog that Kim should be parenting. At this point in time, she shouldn’t even care for a goldfish. She tries to get a toy from him, he does not listen to her at all. The dog is bigger than her. He hasn’t been trained at all and looks like he poops everywhere in the house. She does seem happy and I do wish her well.

At Kyle’s event, Lisa arrives and checks on her staff, Tom and Kristen from Sur bicker in front of their boss. Kristen is insolent and in subordinate. Who does that? Kristen tells Lisa she is being rude and she’s a 30-year-old woman. Kristen is an immature child. Lisa sends her back to Sur. How on earth does she still have her job?

I need to work at Sur, talk crap to my boss, in subordination at it's best & still have a job & making $10k an episode #VanderpumpRules

We meet Carlton Gebbia (pronounced Jeb-ee-ya). She is English, Kyle likes her accent, spoken like a true American. She tells Lisa they have similar accents. Really Kyle? We Brits have more accents and dialects that the USA. Trust me. Carlton was born in Guernsey, The Channel Islands. And she’s a witch. Carlton and David have 3 children, Destiny, 11, Mystery 9 & a son, Cross 2. Nobody wants to say it, I will, those names are in the same league as Blue, North, Hashtag, Moxie CrimeFighter, Bear Blu Jarecki, Pilot Inspektor and many others.

Next up is Joyce Girard the gorgeous Puerto Rican. No Blacks yet again, have money in Beverly Hills. Lisa jokes that Kyle’s hair has competition now that Joyce is on the scene. I think not. Kyle may be many things, but her hair is and always will be fabulous.

I think it was too soon for Kyle to invite Yolanda before speaking with her about their little tiff. Yolanda arrives to support her frenemy.

Carlton is shocked that Kyle, who we’ve seen do the splits on every season of RHOBH, would talk about Lisa’s nipples; but Carlton is a witch. This is RHOBH, what was Carlton expecting, English tea parties? Sur’s former adulterer, Scheana had an accident, she fell and popped her teeth out, she has temporary teeth in which are now grey in color. Brandi of course notices this and asks her about it. Who falls on their face without trying to stop themselves by using their hands to protect their face or body? A drunk person I tell you.

What were thoughts on the premiere? Post your comments below.

Fun Facts: A Chamber of Commerce is a club, a type of business network, their goal is to further the interests of businesses. Business owners in towns and cities form societies to advocate on behalf of the business community. The first chamber of commerce was founded in 1599 in Marseille, France

PS: I want to put two of Kim Zolciak’s wigs on Yolanda and Brandi, I know Yolanda is sick, but her hair looks so frail and thin. Brandi has no excuse. Find a better weaveologist Brandi!

RHOBH Books
Brandi Glanville Drinking and Tweeting: And Other Brandi Blunders
Drinking and Dating: PS Social Media Is Ruining Romance
Lisa VanderpumpSimply Divine: A Guide to Easy, Elegant, and Affordable Entertaining
Kyle Richards Life Is Not a Reality Show: Keeping It Real with the Housewife Who Does It All

More in Real Housewives Of Beverly Hills (472 of 800 articles)