RHOBH: The Dinner Party From Hell & Happy Birthday to me! 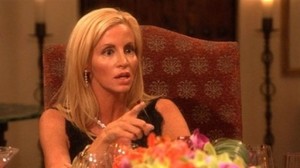 What a night! This episode occurred on my birthday, where I was staying didn’t have Bravo but I was able to watch the madness in the restaurant I was dining in, but with no sound lol. The hostess, waiters and waitresses all watching with me, reading subtitles lol! The hostess Jennifer told me without me saying a word to her, “Camille is a wackadoodle!” Lol

So in saying that, I am sorry the blog is late, I had to watch originally and read the closed captioning. What are these women, drinking, snorting or thinking?

In other news; Lisa gets her US drivers license finally! Dr Paul’s and his son were wrestling and his son jumped on his Dad’s face and injures the Dr’s nose, Adrienne of course thinks the bandage on Dr Paul’s face is for show and pays him no attention.

On to important matters…

Camille decides to have a cocktail party and invite all the women, Faye Resnick a friend of Kyle’s was given a courtesy invite as she and Kyle were originally going out together, previously. Camille invites her friends DD (hair stylist) and Allison Dubois who the former CBS/NBC television show “Medium” starring Patricia Arquette is based on. Camille says that when Allison has too many drinks she belts out. Thanks for the warning, Camille. But I hope you can control your party and friends. If you know this and your relationship with the ladies is already strained, don’t stir the pot.

Now I know, as did you all, that this cocktail party was going to hell in a hand basket very quickly. Camille’s signature drinks were the size of a canoe and super strong, may be this is what dulls her senses.

1st mistake – Kyle asks Allison for a reading and her response was I’m off the clock. Your “gift” should never be unavailable, Allison.

Camille initially fakes she couldn’t remember where she had seen Faye before. Then she miraculously remembers that Faye posed in playboy and talks about the playboy spread as if Faye posed yesterday. I blame the Camille Canoe Concoction!

Camille: I know who it is, the morally corrupt Faye Resnick

2nd mistake – Camille blurts out that Faye had posed in playboy. Mind you Camille has posed in playboy as well, the difference for her is she did it in her 20s, Faye did it for exposure after her friend Nicole Brown Simpson, former wife of OJ Simpson was murdered.

Camille: She posed naked in playboy after the OJ trial! 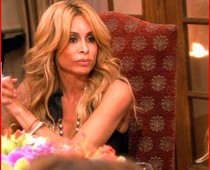 So did you! Camille honey, playboy is playboy no matter what the reason or year you posed. You both posed in a men’s mag. You are no higher or lower in the pecking order because of this. You posed naked so did Faye. Posing in your 20s versus posing in your 30s makes no difference. End of story.

Then Camille has the gall to talk about Faye’s fake lips. Those who live in plastic houses shouldn’t throw scalpels.

3rd mistake – Allison “predicts” guesses that Kyle and Mauricio’s marriage won’t last long and that she can tell that Mauricio will never emotionally fulfill Kyle and as soon as their children are grown they will have nothing in common.

Don’t guess generalities tell me something that only I know, Ms Cleo Dubois!

My guess DD has a little sense and knows not to join the losing side in public only while fixing Camille’s hair, she’s on the payroll, she’s not really going to say anything about her boss.

5th mistake – Smoking cigarettes aren’t “cool” anymore. Neither is watching Allison suck on an electronic cigarette looking down at everyone like she was Queen Tut. She was so pompous it was unbelievable watching this woman in action, she was a force to recon with a ridiculous force. More like a cartoon character. 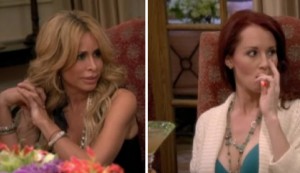 Allison smoking that electronic cigarette was just ridiculous. This isn’t the 20s! By the way the scientist that studied Allison, his claims have been refuted. Dr Gary Schwartz who studied claims that Allison has psychic abilities, his research is in a book titled The Truth About Medium. If you go to a party and claim to be a medium, everyone will want to be blown away and experience your gifts. You’re supposed to be a medium, meeting someone who could tell you your history, fate and future is a once in a lifetime experience. So excuse us regular people who want to know!

Biggest mistake – Allison never told Camille about Kelsey’s cheating and pregnant mistress and you expect us to believe you are a medium or psychic. Psycho or sidekick more like. Birds of a feather really do flock together.

Camille was smug and loved every minute of the witchy arguments between Kyle and Allison, Kim and Taylor etc,. Dear Camille, you are making it very hard for me to stay in your corner. Allowing guests to fight amongst themselves while you say nothing or at least try to stop the cattiness is déclassé.

Did Allison’s forehead ever move?

Kyle, Faye and Taylor should know better, you don’t hold an argument with the crazy and least not any of the crazies friends! Reference: Scary Island

This dinner should have been just the cast of Beverly Hills, a set up of course. But enjoyable none the less. 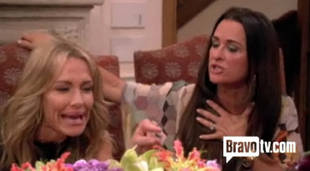 Camille, Faye, Kim and Allison take a hint from Adrienne and Lisa, they did not join in the ruckus and embarrassing behavior. This is how ladies behave not like mean, immature and stupid teenagers. Even if and its a tiny “if” Kyle had said what Camille accused her of, all credibility is lost when you behave like this and allow this behavior at your party between your guests.

Allison: I can tell her when she will die and what will happen to her children.

A good friend should be there for you through thick and thin, be able to tell you when you are wrong and is sometimes closer than a sister. A friend does not allow you to behave like a fool and not correct you. If you have a friend that is leading you down the reality tv path of foolishness and crazy island. You need to change friends, immediately. I still feel sorry for Camille she obviously is and I’m saying it not Kyle,…. Camille IS insecure, immature, morally bankrupt, childish, hurting, lashing out at potential friends because her marriage is failing and behaving very badly. 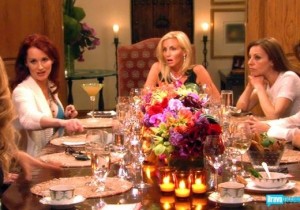 Kim travels home by herself. Lisa, Kyle, Adrienne, Faye and Taylor travel in a limo together. Kim stop alienating yourself and have your sisters back who for the most part is right in these ridiculous arguments.

Lisa: It was a few clowns short of a circus

Me: This was a few psycho’s short of Arkham Asylum.

Teresa Giudice, if there was ever a time for you to flip a table and growl this would have been it!

Next week:
Lisa throws a charity event at her restaurant. Elsewhere, Taylor hosts a Roaring ’20s party, but anxiety levels rise when the bash brings the clashing Camille and Kyle together for the first time since their most recent fight.

More in Real Housewives Of Beverly Hills (714 of 805 articles)