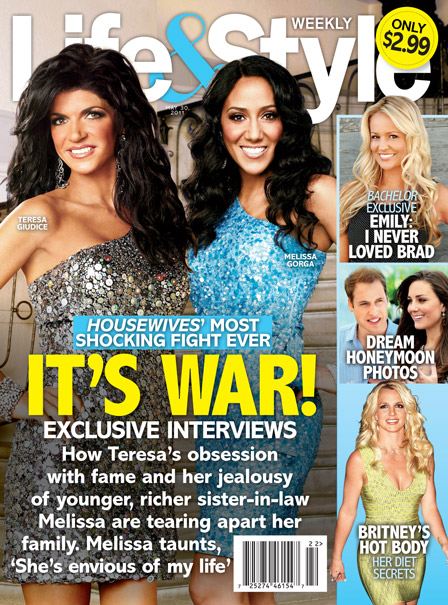 Teresa Giudice and sister-in-law Melissa Gorga’s on screen fight during the May 16 premiere of The Real Housewives of New Jersey has been called one of the worst fights in TV history, but the feud is even worse off screen! New Housewives cast members, Teresa’s brother Joe and wife Melissa, sat down with Life & Style for an exclusive interview and photo shoot to reveal what really went down that shocking night and the history of their family drama.

“I was so upset,” Melissa tells Life & Style about the brawl at her son’s christening. “Teresa’s never given us any respect. She was being fake, just acting nice for the cameras.”

In fact, screen time may have been Teresa’s main motivation for attending the family affair at all. “My sister didn’t even want to be there,” Joe tells Life & Style. “She’d just signed her Housewives contract that morning or the day before because she was mad that we were on the show.” Melissa, Joe and their three children live in a 15,000-square-foot custom-built mansion in Montville, N.J. “I think when Joe and I started making a lot of money is when she really lost it,” Melissa says. “She was used to being the biggest and the best, and then when I came in, she felt threatened. She doesn’t want anyone to one up her. Teresa’s fine with you as long as you’re one step below.”

Things got so bad, the Gorgas found themselves ushered into corners during Housewives tapings, barred from book signings and 300-person premiere parties and their daughter excluded from birthday parties. But the most hurtful was when his sister tried turning their parents against Joe and his wife. “Teresa would tell our parents ‘Melissa this,’ ‘Melissa that’ or ‘Joey didn’t do this,’ and my parents have never been the same,” Joe confides. “Her husband talks about me to them all the time, too.”

Still, they both hope someday the family fighting will end. “Things couldn’t get any worse, so I’m hoping it only gets better post-show. Maybe we can become a family again,” Melissa tells Life & Style. Joe adds,” I have wonderful kids, a beautiful house, the whole package, but I don’t have my family. I’m crying out for my family.”

What do you think? Is Melissa sincere? Is Teresa jealous?