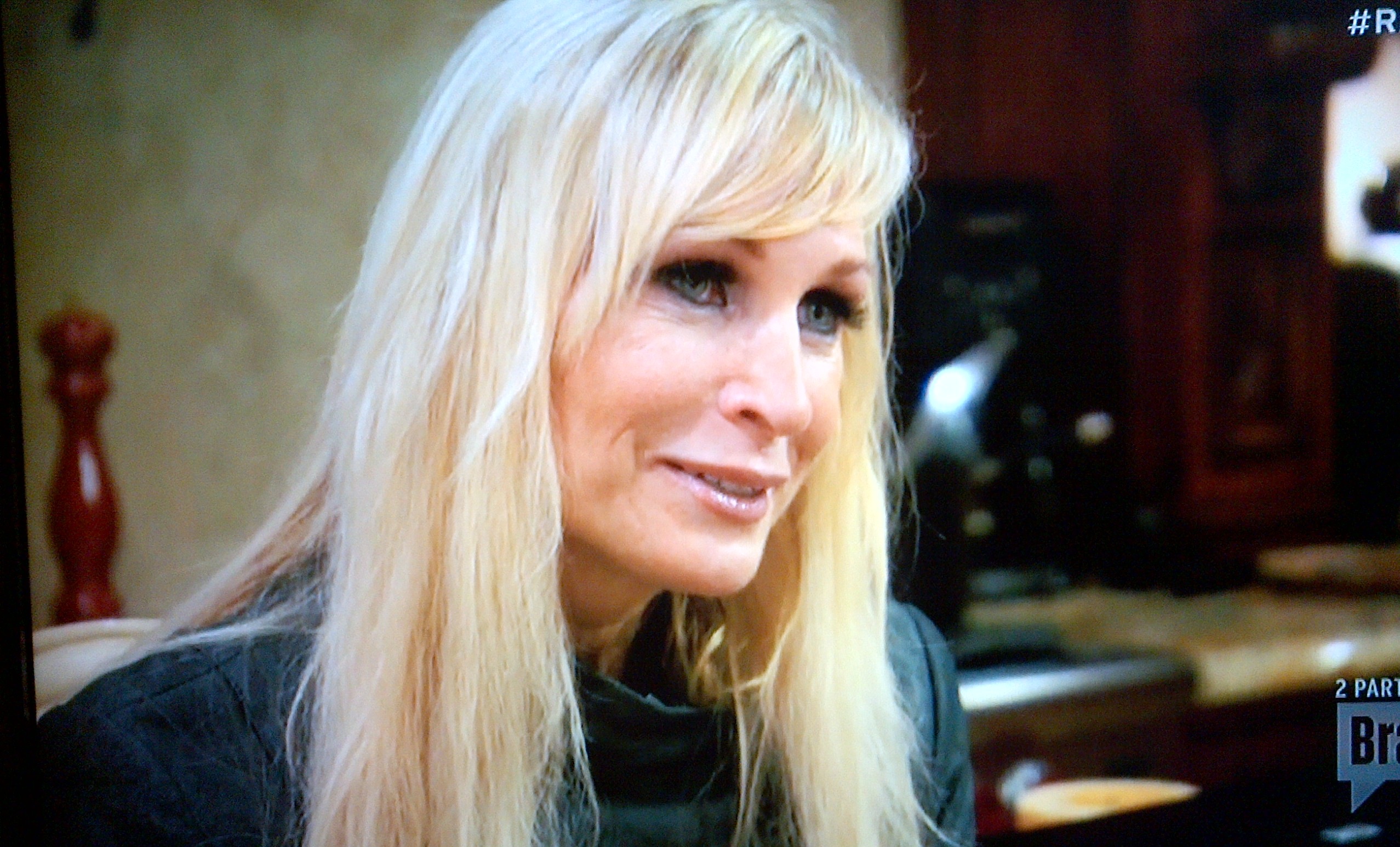 Who is the “Bald Canary”? Melissa is going to meet with some VP’s from a recording label, as they want to help her make make the right decisions with her singing career. As if by magic, Kim De Paola calls and apologizes to Melissa for her behavior (talking about Joe Gorga and his business practices) and to invite Melissa as a guest to her “legendary” fashion show. Mind you, every Posche fashion show has ended in disaster and mayhem has ensued. Why go? Because either Bravo producers think we are idiots or the cast are idiots. Melissa is unsure as to why Kim D is inviting her to the fashion show, “may be I’m the biggest celebrity she knows“, at this point, Theresa is the biggest celebrity – books, fame, drama, hate etc.

Teresa is teaching her daughters Italian, but Milania screams out we are going to learn Spanish. Joe speaks better Italian than Teresa. Shocked! As if by magic, Kim and her terrible extensions or lack of conditioner appear and she invites Teresa to her fashion show. Teresa also states that she and Caroline are not speaking, she divulges that she and Caroline made a pact that neither would speak about the other, but she is talking about Caroline to Kim D.

The Manzo boys and Lindsey who is living the dream with 3 boys, is cooking a brunch for Mama Manzo, Papa Manzo and grumpy Manzo 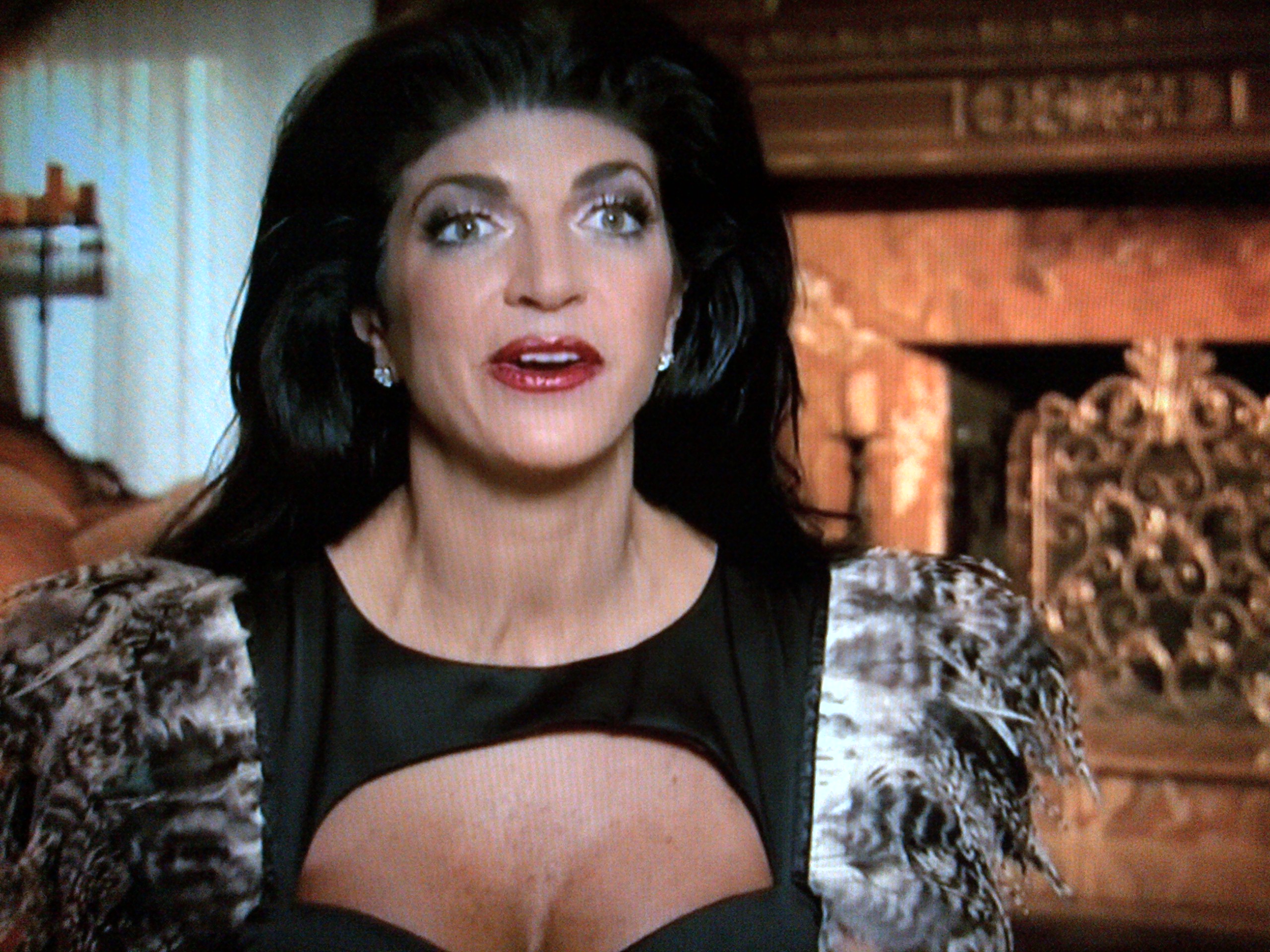 (Lauren) why is she so unhappy, she doesn’t work!? Caroline complains that she can smell the food all the way down the hall, does it smell that bad? Then sit in the car! Caroline states that Albie has a blossoming career ahead of him *cough*. Something only a mother can see. Lauren has recently signed a building lease so her company has a home. Yay Lauren, it’s about time!

Kathy and Rich head out to a meeting to market her desserts. Rich says he will stay quiet until she needs her. That of course is impossible for him, he butts in wherever he can. Kathy with her sweet self states that her desserts give “a happy ending”. Kathy and Rich bless them, don’t do a very good job of representing their products, they are a comedic team with the wife (Kathy) having the ability to bake great desserts.

Caroline and Jacqueline are at Posche trying on some clothes, well at least Jacqueline is. Caroline is not the sparkly type (wearing sequins) and Caroline states that Jacqueline is tiny and she is not. Kim D tells them about the fashion show and Kim D the wicked witch of the North rubs her hands with glee as her disastrous fashion show, check the last four seasons goes ahead while everyone knows (except the cast) that all HELL will break loose. Caroline and Jacqueline claim they will be all ok at the show. Right.

Melissa, Jacqueline and Teresa as promised get their children together for a play date. How quaint. Jacqueline feels that Teresa is being distant. Could that be that you all had a major issue and she probably feels the same way too? Love her or hate her, Teresa cannot win!

We are shown Lauren and her mother Caroline walking into Caface, which was the old Chateau, the local where the ladies used to all visit. Caroline notices all that is wrong with the location, Lauren doesn’t see anything wrong at the moment. Caroline and Lauren working together should be very interesting.

Jacqueline Skype’s her beloved daughter Ashley (e) who tells her she left the gas on in her apartment for three days, that would have been a terrible accident waiting to happen (we are happy she is safe). Ashley (e) shows her mother her new tattoos and through gritted teeth Jacqueline does a terrible job of hiding her disappointment of the additional tramp stamps. Jacqueline is trying too hard, to show us she is happy with her daughter. We haven’t forgotten how Ashley (e) treated her mother. We don’t have short memories. Ashely (e) shows her mother the new tattoos she got a skull on her wrist and “Veni, vidi, vici” on the back of her neck.

While Kim and Teresa get their hair done. Kim D invited her of course. Some smarmy sleeze ball – Angelo – who happens to know Teresa and states he knows Melissa, as she used to dance for him at a strip club he managed. Really?! Just out the blue like that. From managing strip clubs to hair salon concierge?! Dear Bravo, we may lose a few thousand brain cells when we watch your rubbish, but we are NOT brain dead! Where the hell did you dig Angelo up from?

Here’s how it went. Bravo script writer/Producer: Angelo can you say you remember Melissa and approach her sister in law who she happens to have problems with. Oh yes and Teresa can you act shocked when the allegations you have been telling everyone around town happen to be confirmed by the scuzz ball Angelo we will introduce in the net scene?

I like that Kim D asks when did she work for you? Like Melissa was part of the janitorial crew. Angelo, I wouldn’t admit to anyone that you used to manage a strip club, when you are nothing more than a butler now. Teresa appears to be uncomfortable and states she doesn’t want to hear anyone talk about her family. Kim D had to ask additional questions and offend her “friend” Teresa, how long ago did Melissa work at the strip club, he said 7 years ago. What does it matter what Melissa did in her past, is she doing it now? Kim D you are one of this seasons villains, work that money. 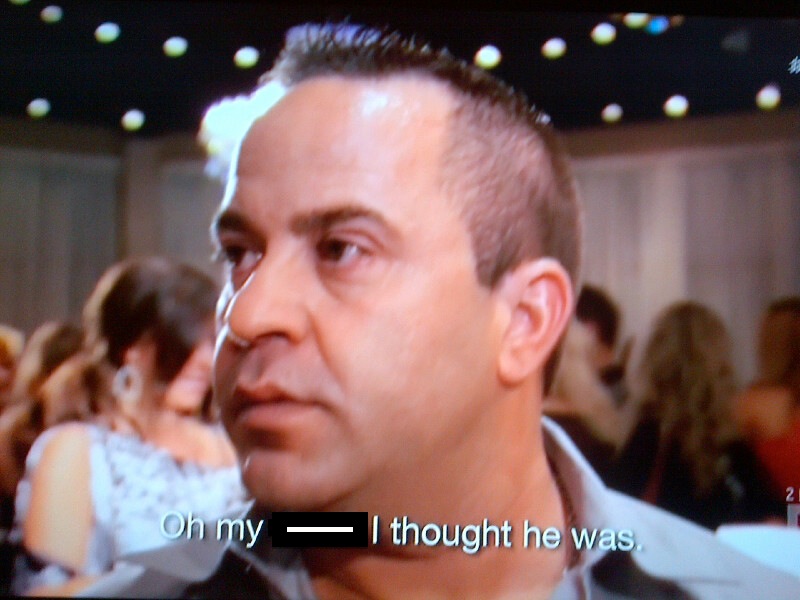 I noticed that Allure, the location where Teresa and Kim D got their hair and makeup done, sponsored the fashion show, so someone knew Angelo’s history with Melissa. Everyone arrives and is seated at the same table. Everyone seems disinterested, Pete Giudice, Joe’s brother approaches and Teresa introduces him, Caroline and Kathy couldn’t care less, Kathy because she realized she could have brought her husband and Caroline, well, Caroline is seated near Teresa, that should be enough for her to be salty.

Angelo approaches their table and greets Melissa, Melissa can’t remember where she knows his face from. At this time Theresa is squirming in her seat and she states her heart is beating 500?! Why on earth didn’t Teresa tell Melissa that she had a run in with this dude? Don’t hate Teresa too much, Bravo has a dirty hand in everything!!!!

Duh dah daaaaah … to be continued…. Melissa calls her husband Joe cusses out drunk and high Kim D and what led to Jacqueline’s break down the texts and phone calls from a mutual friend of Jacqueline’s and Teresa’s spill the truth. This episode didn’t have to be so long the 2 part finale could have just been one episode! 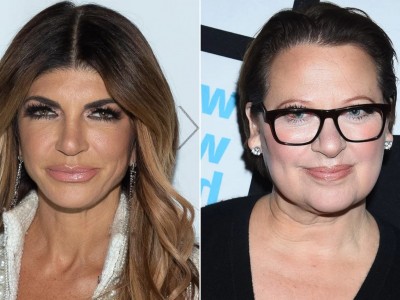