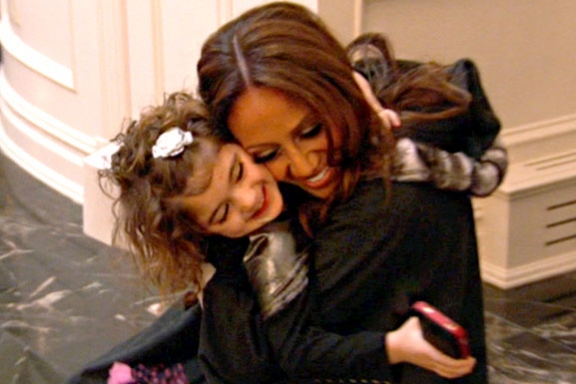 Joe and Melissa take the kids to Joe’s construction yard. While Joe and all the construction men are wearing hard hats to protect their heads, Melissa and the kids aren’t. Melissa then attempts to drive the big machinery while screaming playfully and almost runs over her husband as the children watch. Don’t you need a special license to drive those machines? Either way, Joe is right when he says Melissa should keep to making his dinner instead of construction word. Also, she may want to keep the kids safer next time.

Meanwhile in the Giudice family,Teresa and the girls are setting the table for 11 people. The girls are so excited that their Zio Joe and Zia Melissa are coming over with their cousins. Milania says that she loves having family over and when Teresa asks her if she will cook for her husband in the future, in true Milania fashion she answers, “no, my husband is going to cook for me.” 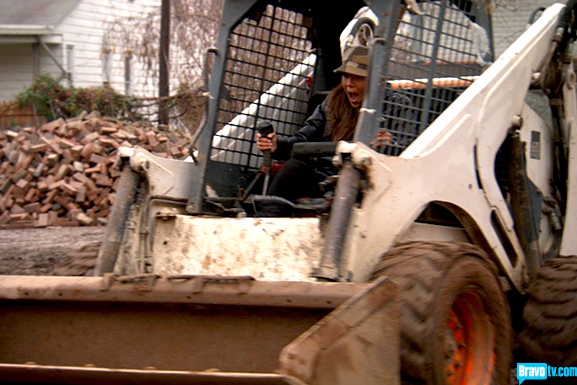 Melissa heads to Jacqueline’s house before going to Teresa’s Sunday family dinner. She tells Jacqueline that she doesn’t think she would have enjoyed the retreat because Teresa was upset with Jacqueline’s tweets and that that was the first thing Teresa brought up. Caroline and Melissa break the news to Jacqueline that Teresa will be calling her soon to air things out and that no one expects Jacqueline to be friends with Teresa again but it would be nice for everyone to be civil and get along. Anyone else notice that the outside of Jacqueline’s house looks significantly different in the B-mode shots by Bravo? But the inside looks the same as last season? Interesting.

At the family dinner, Teresa explains that her parents aren’t present because they want to wait until they are sure there are no hurt feelings between brother and sister because they don’t want to see them fight. Joe admits that he isn’t as close to Gia as he should be since he is her godfather but explains he let the problems with his sister get in the way of his relationship with his niece. Melissa snidely says to Teresa “don’t you want this for our children? Keep being a good little girl and we can.” Teresa says she is going to be a good sister in law and let it roll off her back while keeping her mouth shut. Melissa then tells Teresa she went to Jacqueline’s told her about the promise Teresa made Caroline on the retreat. Joe Gorga says that ten years of a friendship means something and shouldn’t be thrown down the drain. Teresa explains that too much was said that was hurtful, ie. Jacqueline saying that Joe Giudice was cheating on Teresa, that Teresa caught him on a desk at his work, and the names. Teresa says she is Jacqueline’s third victim and that Jacqueline’s true colors were shown to her. Who has 800 pages faxed to themselves to read on Danielle’s background? Jacqueline does. Juicy Joe says that he’s sick of this topic and to drop it because it is boring just as the cousins enter the room dancing and putting on a show. Everyone says they are so happy to be in the spot they are in and they all cheers to family. 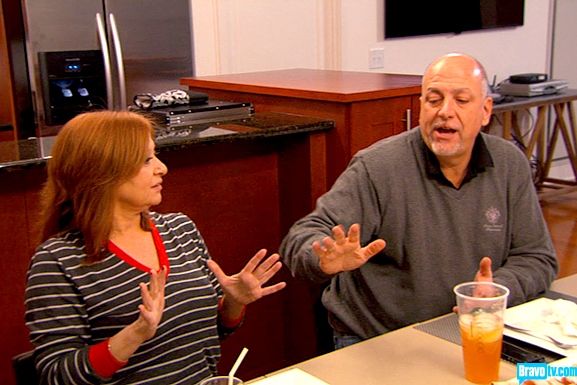 The Manzos are enjoying dinner together and talking about work. The boys are explaining the opening of Little Town NJ and how they are worried about the work load. Caroline tells them they need to make a separate life besides just working all the time and this comment clearly infuriates Albert Senior who usually always keeps his mouth closed. Al tells Caroline she’s nagging the boys about work and that they have to work hard and to “shut the f* up.” The kids are clearly shocked and awkwardly say they will put on the television. Following the outburst, Albie meets with his mom to talk about it and express his concern. Says he is worried about his parents relationship and questions whether they even know each other. He says that seeing each other once a week for thirty years isn’t a marriage and that they don’t even know each other’s hobbies. Caroline is not having the conversation and quickly puts an end to it saying that it’s none of Albie’s business and that he doesn’t need to know Caroline and Albert, just mom and dad.

Teresa decides to hold true to her promise and calls Jacqueline and says “it’s your favorite friend.” She tells Jacqueline that she is looking to clear the air but has no intentions of ever being friends again. Jacqueline invites Teresa and Joe to her house but Teresa opts for more neutral grounds at a local restaurant. The men go to talk in the bar while the ladies sit down. Chris and Joe make up almost immediately by agreeing to put the past behind them and move on. Chris says that it’s a lot easier for men to make up than girls and he’s right because in the other room Teresa and Jacqueline are looking like they are sitting on nails. Teresa starts off the conversation by saying Jacqueline really hurt her. She says that she would feel so guilty if she knew she had broken up a brother and sister’s relationship to which Jacqueline comments that she didn’t and had absolutely no part in their relationship troubles. Teresa then brings up the cheating allegations Jacqueline made and instead of Jacqueline apologizing she says she would like to change the subject so as to not bring up things that will further their wounds. 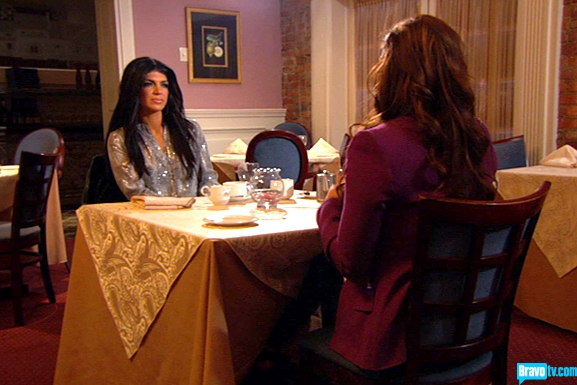 Next week’s previews have Jacqueline and Teresa coming to heads over their argument with Teresa calling Jacqueline an “evil person” and Jac finally reveals how she truly feels. Also, Ashley (or Ashlee as she now spells it) reappears. Can’t wait to see her transformation.

Do you think Teresa and Jacqueline should let bygones be bygones and make up? What are your thoughts? Post your comments below.