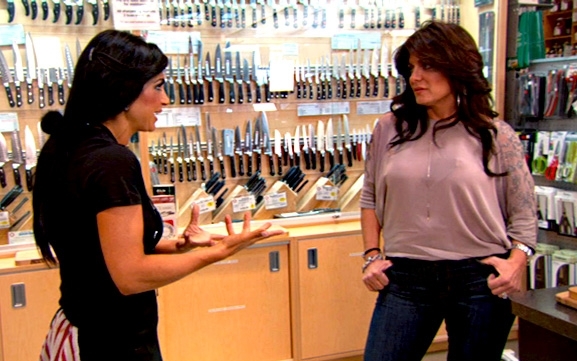 Teresa is teaching a cooking class and Kathy attends, arriving fashionably late and interrupting the presentation by apologizing for not going to Teresa’s hair care event the night before. After the presentation, Teresa and Kathy talk about the event and Teresa tells her what happened between Melissa and Penny. She says it was great for the two to talk because Melissa was told that Teresa didn’t have anything to do with the rumors about Melissa. She tells Kathy how excited she is for the upcoming, Arizona trip and how glad she is that everyone is getting along now. 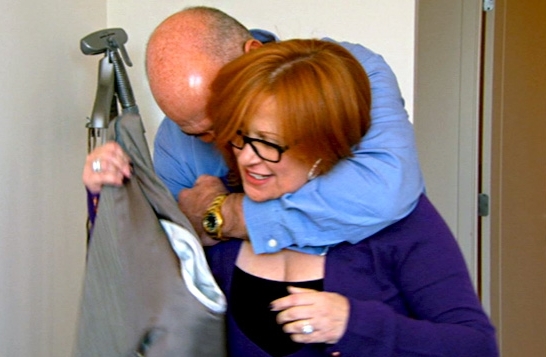 All of the couples are shown packing for Melissa’s birthday getaway to the Arizona spa. While Melissa and Joe are packing their suitcases Joe says he’s fine with Joe Giudice going on the trip but that he doesn’t want to hang out with his sister because he feels she has something to do with the Penny rumors. Side note: Melissa’s lightened hair looks amazing. In a rare shot, we see Albert with his arms wrapped around Caroline’s belly and pinching her butt. Teresa is packing with her four girls and showing them the bikinis she plans to wear. She reveals a sparkly bikini that features a thong bottom. Gia begins to scream and scrambles for the bikini while Milania asks, “ew why is your chuckalina covered in sparkles?” Gia grabs the bikini and throws it out because she says it’s ridiculous. While Jacqueline is packing, she tells Chris how weird it is because despite not wanting Teresa as a friend anymore she is beginning to feel like she wants her back in her life.

The spa provides an energy healer for the families once they arrive. While most of the group don’t believe in mediums, Tina Powers, the energy healer, begins to give them readings. She says she’s getting a spirit named Maria and Joe Giudice reveals his grandmother’s name is Maria. The medium says she is really trying to come through and express her love while Joe says his grandmother is still alive as the entire group bursts out laughing. Richie says it’s absolutely ridiculous that they have to attend this and that he has no time for it. But the next spirit who comes through is Rich’s father and the reading ends with Rich in tears saying he now believes in mediums. He says his dad told him to watch his and Kathy’s wedding video and that he will be there forever. The medium then turns her attention to Teresa and Melissa and asks them how they’re related, as if she’s never watched Bravo’s show. She’s says there’s a lot of animosity between the two and that it’s because of the gossiping and groups of people playing “telephone” and misconstruing stories. She says if they learn anything, they should know that blood is thicker than water. Advice that makes Jacqueline smile, Teresa then nods her head, Melissa looks skeptical. Melissa says in her one-on-one interview that the medium has lost it, if that’s all she can read from the spirits. Kathy and Rosie’s father comes through next and he says to tell their mother not to be afraid. Kathy says while she had a great relationship with her father, he never told her, he loved her and she had hoped in her reading he would say that. While Teresa attempts to defend her uncle saying that they were brought up old school, Rosie says that her dad used to tell her he loved her all the time but Kathy never got what she needed from her father. I can’t imagine never being told “I love you” by your father, that has to be hard. 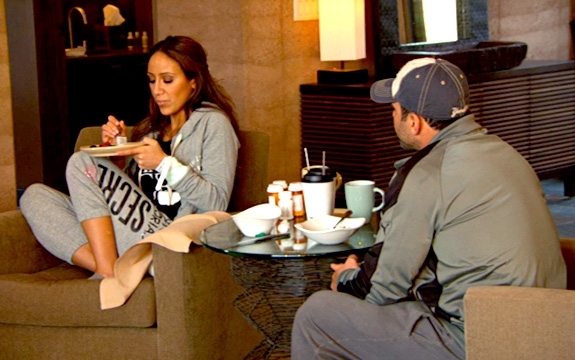 Melissa is very sick. She is moaning and groaning while blowing her nose and sneezing. Melissa felt so sick that she ended up going to the hospital to get antibiotics. She says, she’s in the worst pain of her life while Joe tells her “come on you’ve had three babies”. Melissa begins to cough up, phlegm. Which was probably the grossest thing ever. She asks Joe if he’s going to hang with her or go hiking with the rest of the group and he says he has to go with the group because he invited them. So Melissa does what any sick person would do; she lies outside on a lounge chair by the pool with a cocktail while she complains how “hard it is being sick on your birthday.” 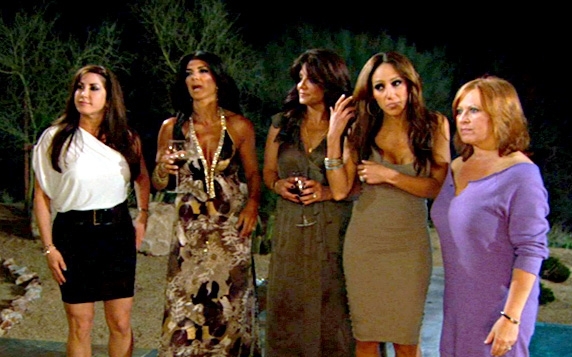 At the end of the hike, the group is asked to attend a “release group”. In this group they are to write down something they wish to “release” and burn. Albert refuses to participate and Caroline volunteers first with her wish. She says she releases “worry” and burns the piece of paper saying that Albert needs to break down the wall and show his vulnerability sometimes. Joe Gorga gives up hatred and says that he’s tired of fighting no matter what his suspicions are. Kathy releases putting everyone’s needs before her own. She says it feels good to do things for others but that she needs to worry about herself too because she feels taken advantage of and her voice needs to be heard. Jacqueline wants to release all the ill feelings she has for those who have hurt her this year. She begins to cry and says she feels so much better. When Teresa gets up to do her release, she calls up Jacqueline, Kathy, her brother Joe, Chris, and Caroline. She says she’s very emotional over all the people who still have problems with her and says she wants to hold hands. The group stand in a circle holding hands while Teresa says she wants to release the negativity. Joe Gorga says he wishes his wife was there to see the change in Teresa and how sincere she is right now. After the release event, Teresa and Jacqueline cry and embrace. Teresa says she doesn’t want to hurt anyone because karma will come back to her or if it doesn’t get her it will get her girls. Instead of Jacqueline telling Teresa she feels that comment was directed at her in the sense of her son Nick having Autism, she smiles at Teresa and runs back to Chris. Looks like the love between the group is about to be given up next week. Do you think Teresa meant to make a dig at Jacqueline or is Jacqueline blowing it out of proportion? What are your thoughts? Post your comments below.