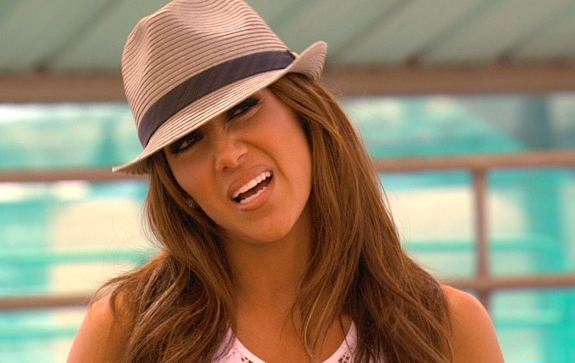 The group is still in Arizona at the spa celebrating Melissa’s birthday. And yup, you guessed it, they are still doing therapy and group rituals much to Melissa’s dismay. For once, I have to agree with her that it’s time to actually celebrate and have a couple drinks because the therapy story line is growing old…fast. They meet with therapist Wyatt Webb who has been a therapist for thirty-three years. He uses horses to break down people’s fears, emotions, and thoughts. Today’s activity involves opening yourself up, walking over to the horse, and getting the horse to pick his foot up so you can clean the horse poop out from underneath it. The activity is about vulnerability. Richie begins by cracking a joke by saying, “The guy’s a genius because he charges people to come and clean up after his horse.” While the entire group laughs, Wyatt remarks that in order to cover up his feelings, Richie cracks inappropriate jokes. Spot on! This therapist is actually amazing at his job. He gets almost all of them to open up, even Joe Giudice. 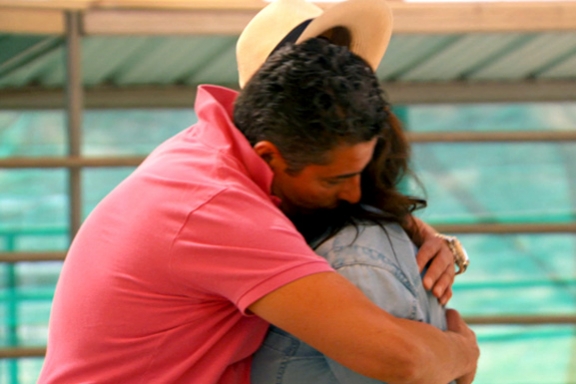 Rosie goes first telling Wyatt she feels very anxious and uncomfortable. When he asks her why she is silent and her eyes begin to fill up with tears. He asks her if it’s because she never felt good enough. She reveals that she has a very lonely life because she never married, doesn’t have children, and doesn’t feel like a good “Italian woman.” She walks over to the horse and is able to lift its leg. Caroline is capable of getting the horse to lift its leg as well after a little couple’s therapy. She and Albert approach the horse together and the therapist tells Albert that he can notice a kinship between the two of them just by looking in his eyes. He than says, “Can I ask you a question? Were you abused?” Albert begins to silent cry and shake his head yes. He says it was emotional abuse by his father which is why he has pursued his career so badly and wants desperately to succeed at life. It’s nice to see Albert finally getting involved with the therapy aspect and it looks like it was really good for him. Jacqueline begins to cry the second she approaches the horse. When the therapist asks her why, she replies that she is nervous. He tells her no one cries from being nervous, but that they cry when they are upset or hurt. She gets the horse to lift its leg and Teresa runs up and embraces her. In his one-on-one interview, Chris reveals that this is the Teresa he knows and loves. 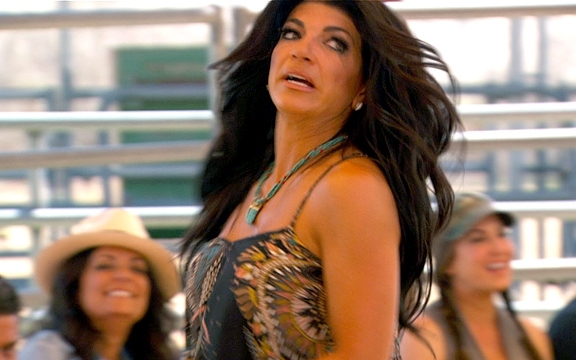 In a shocking turn of events, the only two people who can’t prove authenticity and get the horse to raise its leg are Melissa and Teresa. Who would have guessed that? The two are actually exactly the same person it’s a shame they don’t get along better. In the beginning they look appalled at the whole idea. They look at each other shaking their heads, sharing Altoids, and refuse to approach the horse at first. Finally Melissa does, and says her fear is being “peed on by the horse.” She then says she has to do the “Rosie walk.” Walks 100 feet away from the horse, and begins to strut her stuff back. It’s very awkward to see and it doesn’t work the horse. When Joe yells some help from the corner, the therapist tells him he needs to let Melissa handle things on her own or she’ll never learn. Melissa eventually gives up and takes a seat. Teresa approaches the horse clearly distraught over the entire aspect of the thing. She says she’s deathly afraid of horses. After a few attempts she runs from the horse and says she’s had enough of that. While the rest of the group doesn’t understand, Melissa shakes her head in agreement. Caroline is so right when she says the exercise was very “telling.” The two could be twins! 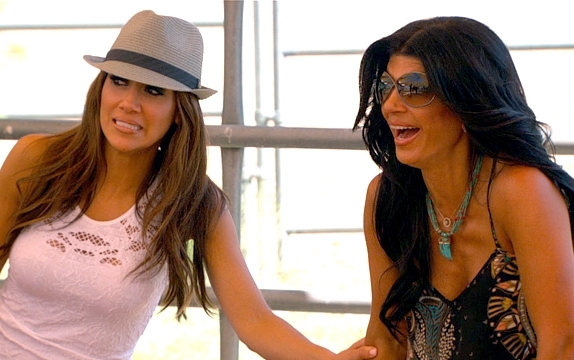 Joe Giudice reveals that he is actually extremely worried about his upcoming DMV court case. The entire group is shocked to see him open up and share his feelings. He tells them that he is worried about the possibility of jail time and having to be away from his wife and kids. All of the men say they don’t think he should go to jail because it’s not fair for the girls. They also pat him on the back later on for opening up and letting them know how he feels. Joe says that even the toughest men are scared of something, and that every man will cry at least once in his lifetime.

Kathy and Richie are up next and Richie reveals his anger problem. When Kathy says he holds everything in and then begins screaming, the therapist tells him that is rage. Joe Giudice gets a call and his cell phone and steps out. You begin to hear his gurgling voice and my heart began to race! Anyone else think he was talking to another girl again? Teresa chases after him and says “Hi Milania!” And everything is set right. While the two chat with their daughter, Kathy opens up and shares that she keeps everything in and doesn’t worry about herself enough. She says Richie’s anger makes her cry and really affects her. She says that the two are partners now and have to focus on their relationship as husband and wife too. The therapist tells her she needs to celebrate her triumphs more often while Richie embraces his wife and says how surprised he is she has been feeling this way. Rosie and Kathy say in their one-on-one interviews that they don’t feel Kathy got the “attention” she deserved from the others.

After the therapy session they head home to change and have dinner. Melissa, Teresa, and Joe Gorga hang out by the pool sharing their dismay over the horse therapy. They all say it was pointless and ridiculous that the therapist would think he knew them and their feelings after just meeting each other. Melissa asks “is he psychic?” Teresa says they should be drinking, doing spa things, and swimming. Melissa shakes her head enthusiastically and says yes we need to do more of that. Shockingly, there is another therapy session scheduled and if I was Melissa I would be screaming. The session involves sitting on chairs and banging drums. Teresa and Melissa look absolutely miserable. While banging their drums, Rosie opens up to the group and says she felt terrible for Kathy at the horse therapy because Teresa and Joe left the room to answer their phones. Kathy then begins to say she always feels put to the side and it wasn’t fair. Melissa is seen rolling her eyes and Teresa defends her actions saying her daughter rang and she has to answer it. Kathy whines a bit more about how she feels left out and Teresa says it is a “Marsha, Marsha, Marsha” moment. 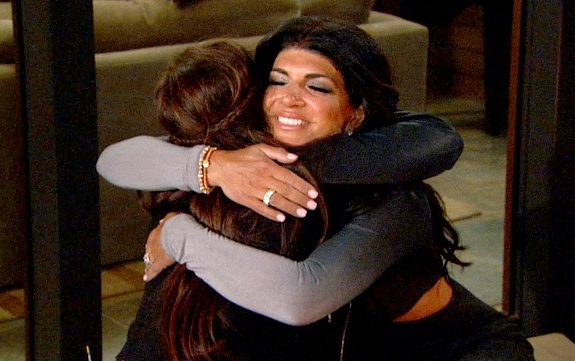 Jacqueline and Teresa head out by the fire pit to have a moment together. Teresa tells her it’s obvious there are still some things bothering her and that they should get it into the open and then burn it forever and never talk about it again. Jacqueline shares the karma comment and how she feels it was directed at Nicholas. Teresa says she would never say anything like that and it was strictly about her family and her daughters. The two scrape under each other’s shoes and embrace. It’s great to see the two become friends again because they were always so close. Hopefully it will last.

Next week’s episode looks crazy good. There is a toast given at dinner with a direct snub at Teresa by Melissa and Joe Gorga is furious over rumors being spread about Melissa. The entire group tells Teresa to stand by her brother and stop “her” (whoever “her” is) from spreading the rumors. I can’t wait to watch! What are your thoughts? Post your comments below.

Why Dina Manzo Left The Real Housewives Of New Jersey

Why Dina Manzo Left The Real Housewives Of New Jersey