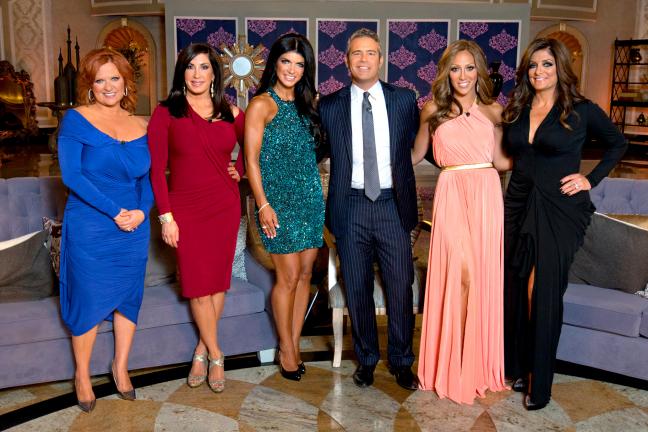 Although Teresa and Melissa claim that everything is “good” between them, it’s obvious the two are still mad over everything that has transpired this season on Real Housewives of New Jersey. The two go tit for tat over every little comment made in their personal interviews. Instead of following what they vowed to do at the end of last episode, stick together, they are opening old wounds and owning up to nothing.

To begin the reunion, host Andy Cohen addresses the fraud indictment against Teresa and Joe. He asks her if any of the cast mates have reached out to her and she says that they have all been extremely supportive in her time of need. Melissa says no one expected charges to be filed while Caroline says she knew there were problems but she didn’t know they were of that “magnitude.” Teresa says that they will fight the charges and be vindicated in court. She also warns that what is happening to her, “could happen to anybody.”

Secondly, Andy brings up the ongoing family drama between the Gorga’s and the Giudice’s. He goes hard on Melissa by reading viewer’s comments that Melissa speaks very poorly about Teresa behind her back. He also reads opinions that Melissa can’t sing and that a video of her radio appearance was leaked that had viewer’s saying how terrible she was. She defends her singing by saying that the video wasn’t true which is why it was taken down and that there was another song playing in the background which was messing up her vocal piece. To address the Teresa situation, she says that she is never negative about Teresa and that if she is it’s because Teresa was negative first. I’m with Caroline on this one as she rolls her eyes. Teresa tells Melissa that it really hurt her feelings when she claimed that Joe Giudice had cheated on her. Melissa rolls her and attempts to blow it off as Teresa says that Gia saw that episode. Caroline says that an observation she made this season was how similar Melissa and Teresa are. She says that this is the reason the two butt heads so much but Melissa absolutely hated that opinion. She made it very clear that she and Teresa were completely different people and that if they were exactly alike they would get along much better. The two are joined by their husbands on the couches and Joe Giudice looks like he’s about to fall asleep from boredom. Joe Gorga tells Teresa she should apologize for calling him “whipped” which she does. She then asks for his apology for calling her “trash” and he refuses because “brothers and sisters shouldn’t have to apologize.” Why doesn’t Joe realize how hypocritical he is being? At the very least Teresa has grown this season by being able to admit her flaws and apologize. For once I wish Joe and Melissa would own up to their piece in the family’s disconnect. 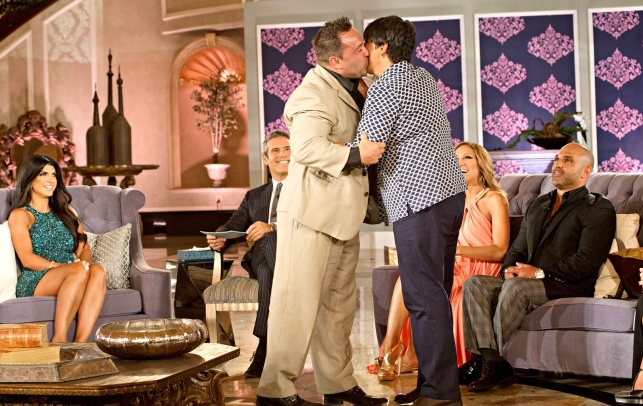 When Melissa’s book was brought up, Andy questioned why she added her father’s infidelities into the piece. Though Melissa denies that she’s talking about her father’s “infidelities” and says she was talking about his going “missing” for days on end. She says adding this was important because it helped others understand why she is the way she is. Teresa says it was a little weird and sad to have to hear these stories on television because it’s her sister-in-law. Melissa tells Teresa that it’s not anyone’s business which Teresa points out that Melissa has already told millions of people. Melissa then tells Teresa that they’ve never had that “sisterly bond” where she would be deserving of knowing anyway. Melissa says that she keeps Joe on a short leash and would never allow him to go to a strip club. Caroline doesn’t understand that analogy and says that she has been to strip clubs and received lap dances with Albert sitting next to her. She also adds that it would naive of her to think that in the 32 years they’ve been together that Albert has been 100% faithful. When Andy says that Caroline is basically admitting that her husband has cheated on her, Caroline denies that completely and says that isn’t what she means. I have no clue what she means.

Rosie then joins the cast and is questioned on Richie being so touchy with her on the Lake George trip where they had to show they trusted one another by falling backwards into the other’s arms.  The clip is replayed where Rosie fell backwards into Richie’s arms and he grabbed her breasts with both hands. She explains that they’re an extremely close family and that everyone does it. She then reaches over and grabs Joe Gorga’s crotch and cups it in her hand. When Joe asks her how it feels she says that he “has enough, don’t you worry.” He then tells her to be careful because “he bites.” It’s probably the most awkward scene ever and makes Caroline disgusted. Even Melissa appears shocked and unhappy by the gesture. Now remember, Joe is Rosie’s cousin! Ew! The loving relationship between Rosie and Joe Giudice is then featured through some special scenes. The two are pictured drinking heavily together on the Lake George trip and joking around about Joe having a son one day. Joe then says that they should take his eggs and mix them. The two look genuinely confused as to whether or not he has eggs. At the reunion, Rosie admits they were just very drunk and that they know he has sperm. Who knew the two were so hysterical together? 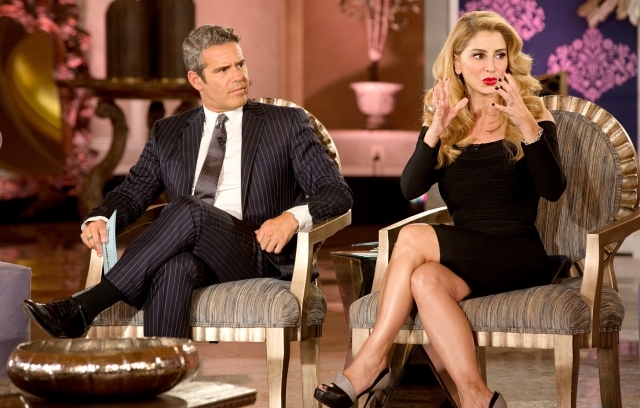 Dr. V joined the cast, WHY!? She was very proud of Teresa for learning to express herself. She then told Jacqueline that she played a huge part in helping Teresa learn that. She then asks the group what they need moving forward and Caroline is first to speak up by saying she wants the truth. She says that Teresa and Melissa are doing nothing but lying. Melissa is clearly not happy with this remark and Teresa says that she has told the truth. Caroline then reveals that she is furious that Teresa said Caroline was miserable in her blog. Caroline said Teresa completely lied and hadn’t seen anything. Teresa agreed that she hadn’t seen it but had “heard it.” Melissa admits to telling Teresa that and Teresa says she was very mad at Caroline which is why she wrote about it in the first place. Dr. V interjects and tells Teresa that wasn’t nice of her and that she should apologize. Once again Teresa apologizes and it appears to be swept under the rug.

So much of this reunion is old news. I’m tired of the Melissa/Teresa saga and drama. I’m tired of the repetitive apologies and Melissa cheating rumors. It’s getting old. Bravo needs a major cast shake up! What are your thoughts? Post your comments below.