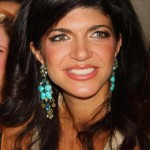 Teresa Giudice’s Possessions To Be Auctioned, Worth Only $51,160

Bankrupt Real Housewives of New Jersey star Teresa Giudice’s possessions are set to be auctioned off later this month despite her legal protests, but the reality star shouldn’t expect to cover her massive $11 million debt with the proceeds.

RadarOnline.com, citing bankruptcy papers filed in court, reports that Giudice and husband Guiseppe’s possessions were itemized and found to be worth just $51,160. That included the couple’s wedding rings – valued at $120 each.

After declaring bankruptcy earlier this year, Giudice famously went on a $60,000 home furnishings shopping spree, though given the valuations of her possessions, the spending was misguided.