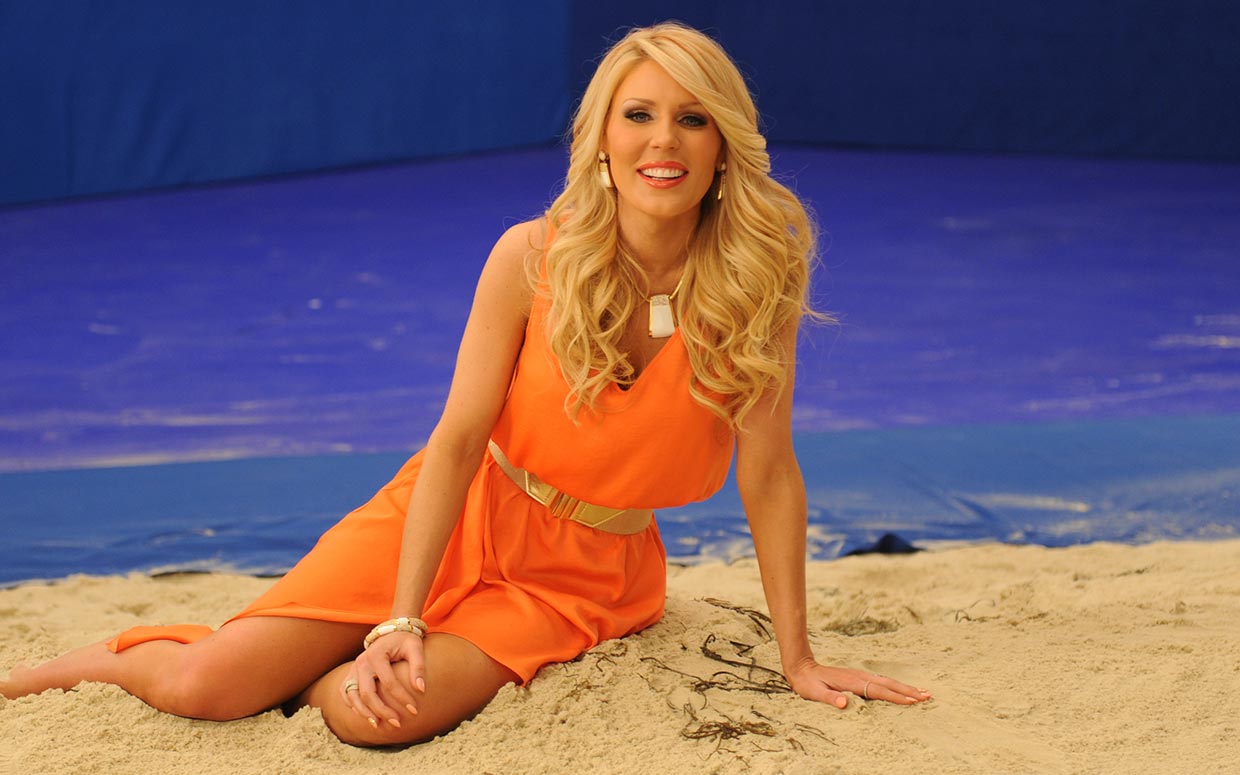 via Parade:
On her recent engagement which was caught on camera.
“It’s been so wonderful. I had been so weary about getting engaged again because I had a lot of issues from my past marriage and past relationships. Obviously, I went through a pretty horrible time when Jeff passed, and I thought to myself: ‘Maybe this just isn’t the path for me. Maybe I just need to forever be in a boyfriend-girlfriend relationship.’ But after four years of being with Slade, I realized that he’s such an amazing, wonderful person — from who he is as a father and who he is as a partner — and we just went through such a tough period last fall with his son and dealing with his illness and it just made me realize that life is so short and why let your past get in the way of your future? Our engagement has been a really great time. We’re basking in the glow!”

On taking the proposal into her own hands.
“I was so nervous to propose! You’ll see it this season on the show. It was filmed and it was a pretty spectacular engagement. I can’t tell you details, but I can tell you the fans will not be disappointed. There are a lot of different steps that happened in the proposal and Slade cried a lot, I can tell you that!

“I feel so bad for all of the men out there that have to do this. It was a lot more nerve-wracking than I could have ever imagined, but I think you’re just nervous because you’ve planned this whole big surprise and you’re so excited and you’re hoping that they’re going to say yes. It’s an exciting time and it’s been four long years. I kind of put the kibosh on him proposing to me last year, so there was a lot at stake for me at that moment. I was being very vulnerable and putting myself out there, but I’m also a woman who knows what she wants and I go after it. I think in the year 2013, women are taking over the world! It’s OK for us to go a little bit against tradition and take hold of our own destiny.”

On putting wedding planning on hold.
“We definitely haven’t decided on a date. It took us four years to get to the engagement, so I don’t know how long it will take to get to a wedding, but we have babies on the mind, so we haven’t decided if we’re going to go the baby route first or the wedding first. Planning a wedding is a big undertaking and I like every last little detail to be perfect. Slade’s never had the big hoopla wedding either, so I think its going to be something that he’d really like to do, and so we’re just going to plan it when it’s the right timing. We’ve talked a lot about having a destination wedding, and we talked a lot about Europe because we love it there, so we don’t know yet. We’re just enjoying this time now.”

On why she returns to RHOOC each season.
“I do really question every year why I do come back. It is very emotionally draining for me. I don’t enjoy the drama at all. It drains my spirit sometimes, but I love my fans. They’re the reason I come back. They are so supportive and encouraging. And I’ve used this platform to help build my businesses. I was very clear when I first started out on the show that I wanted to get in the fashion and beauty spaces, and I’ve done just that. I continue to work really hard to help them grow and expand. That’s really my ultimate goal: to show other women out there that you can have your world crumble around you and you can have the worst thing happen, which is lose your partner, and you can still survive and get back up on your feet and make something happen for yourself. I feel like I have a responsibility to let people know that life is tough and you can get through it.”

On the biggest misconceptions about Gretchen.
“I think its been laid to rest because people have seen me work so hard as an entrepreneur, but for a long time, people just thought I was a gold digger, and I was with Jeff just for money and Jeff [who lost his battle with cancer in 2008] left me all this crazy money, but that didn’t happen. And people also think that I just sit around and pick flowers all day and get my hair and makeup done, but I challenge somebody to spend a week with me — or even a couple days — and they’ll see I’m probably one of the hardest-working women there is in the business. I take huge pride in the fact that I work so hard. And they think that Slade is just riding on my coattails and that I just pay for him to have a posh lifestyle, but he works harder than me — and that’s working hard! We make an amazing team. We really support each other. That’s what partners should do.”

On this season of RHOOC.
“I didn’t really get to know Lydia that well this season because of the personal issues Slade and I were dealing with his son being in New York, so I don’t think we really hit it off in the show. However, I have gotten to know her outside of filming, and I really like her. I really look forward to that relationship developing more. And as far as this season goes, I’m hearing a little bit of rumbling that I’m being so mean and only saying what Tamra says now. I’m not mean; I just kind of was over it this season. I was dealing with such a hard situation with Slade’s son that the things we were arguing about were so insignificant in comparison to what I was dealing with in my life. I’ve always been real and true to my feelings. They might not like it, but I’ll always be authentic.”

More in Real Housewives Of Orange County (225 of 363 articles)