Devon Lynn Kile from Laguna Hills, California, aged 46 who wanted to appear on The Real Housewives of Orange County was placed on 10 years of probation Wednesday 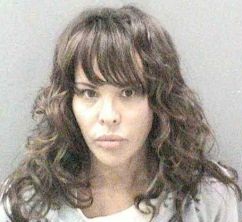 for committing a state record more than $30 million in workers’ compensation insurance fraud. She pleaded guilty in April to more than 70 felony counts, yes 70 counts, including misrepresenting facts to the State Compensation Insurance Fund and failing to file a return with the intent to evade tax, according to the Orange County District Attorney’s Office.

Kile has served two years in county jail while her case was pending. If she does not successfully complete her probation, she will be sentenced to 10 years in state prison, Superior Court Judge Erick Larsh ordered.

The restitution to the state insurance fund is still to be determined, pending a decision by an appeals court on how much her husband, who is a co-defendant, owes.

Kile’s attorney Ken Chinn said he expected her to be released Thursday night.

Among the luxury items seized by investigators at the couple’s home: $500,000 in jewels, including Chopard and Rolex watches and a 10-carat diamond ring valued at $70,000, Gucci, Chanel, Burberry and other luxury-brand handbags and shoes, and two Ferraris, a Bentley and a Range Rover.

Also seized during a raid on their Laguna Hills home was an application for Devon to appear on the Real Housewives of Orange County.

Why on earth did they seize the application for a reality show, oh we gotta get that, there maybe some incriminating evidence!! I think Devon would have fit right in with the Real Housewives Lifestyle of pretend riches! She looks pretty good for her age, oh well, Devon, crime never pays!

More in Real Housewives Of Orange County (285 of 364 articles)