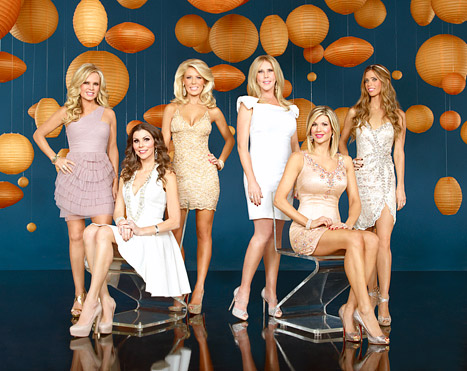 NEW YORK – February 19, 2013 – Bravo Media’s original series that started the hit franchise, “The Real Housewives of Orange County” returns for an epic season eight on Monday, April 1 at 8/7c. Reeling from the repercussions of last season’s earth-shattering clashes, the series once again ventures behind the gates for a scandalous look at the loves and lives unfolding inside one of Southern California’s wealthiest communities. Returning Housewives Vicki Gunvalson, Tamra Barney, Gretchen Rossi, Alexis Bellino and Heather Dubrow are joined by fresh-faced, level headed and surprisingly direct Lydia McLaughlin. After leaving the show four seasons ago, original Housewife Lauri Peterson makes a surprising return, rekindling her friendship with some of the ladies and revealing shocking information that will rock one of the wives’ worlds.

This season on “The Real Housewives of Orange County“:

Lydia McLaughlin, 31, was recently on an episode of the Real Housewives of Beverly Hills. Lydia is the managing editor of Beverly Hills Lifestyle magazine, the publication that featured Brandi Glanville. Lydia was on set with Lisa Vanderpump for Brandi’s Hollywood glamour shoot this season and rumor has it, Lydia, as well as Heather, were each considered for RHOBH, but were eventually offered roles on the decidedly less popular and way less glamorous, RHOOC.

Like Heather, Lydia seems to be super, super rich. She’s heiress to a Canadian media company worth over $100 million, and she and her husband Doug own multiple businesses in Orange County and Beverly Hills.

More in Real Housewives Of Orange County (245 of 364 articles)